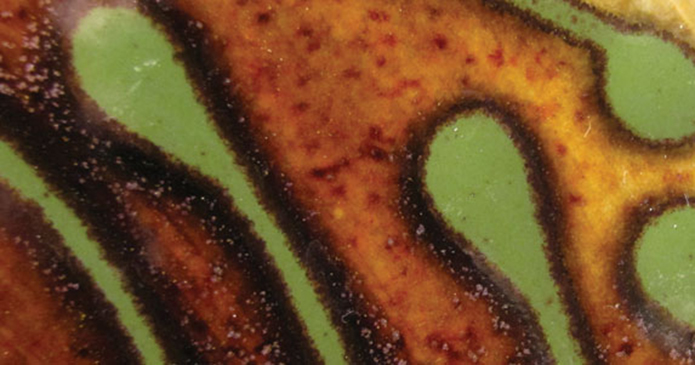 Chrome oxide or Cr2O3 is a common studio material that can help produce beautiful colors in the kiln. But it can be quite challenging to perfect. So, in the Technofile department in Ceramics Monthly archive, John Britt, one of our expert glaze guys, gives the low down on how to get chrome right.

In today's post, I am sharing an excerpt from that Technofile article and a few great cone 6 chrome glaze recipes. - Jennifer Poellot Harnetty, editor

Chrome oxide is an amphoteric oxide, which means it plays an intermediate role between fluxes and silica. It is generally very refractory and not very soluble in a glaze melt but sometimes it acts as a flux, e.g. as with the acidic tin oxide. The exact color it produces depends on the role chrome is fulfilling in the glaze. For example, in high alkaline or high boron glaze bases, when less than 1% chrome is added, it can dissolve well and give bright glossy transparent greens, (see Odyssey series 0.15/0.5%). In a zinc (zinc chromate) base it produces browns. In a high calcium or high strontium base without zinc, it can produce pinks, or crimson to burgundy colors (see Raspberry and Cranberry glaze). 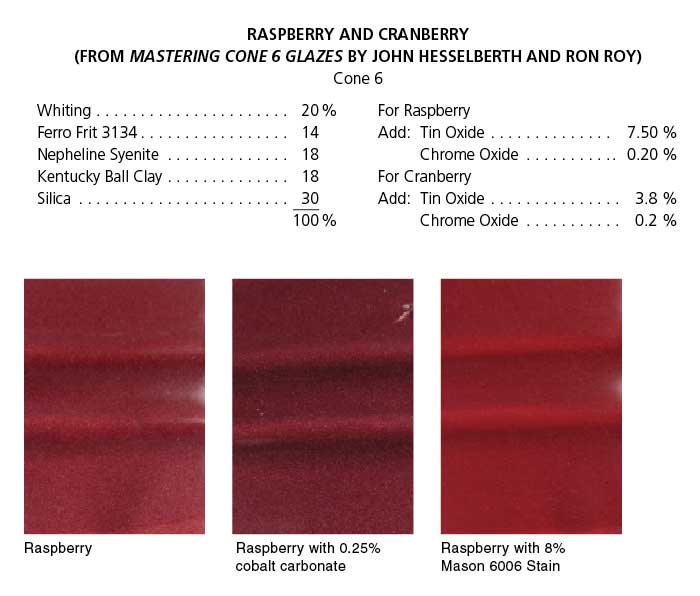 Less than 1% chrome oxide usually disperses in a glaze melt but occasionally it may cause speckling. To disperse the color evenly, depending on the stiffness of the base, it may require ball milling.

Because chrome produces such strong opaque greens, it is often used as a decorator color rather than a single glaze for the piece (see Temmoku Gold and Odyssey green glaze). Other techniques may include using a dark clay body, glazing with a chrome green, and after firing, sandblasting the piece to give it visual interest.

Because chrome oxide is volatile, placing a chrome green glaze next to a tin white glaze will often produce pink flashes on the tin white glaze. A good kiln vent can help to pull out the chrome fumes before they have time to latch onto the tin whites. But chrome flashing is best avoided by not mixing the two glazes in the same firing. Alternatively, if you like the pink flashing, this can be encouraged by mixing chrome greens and tin whites in a firing or even firing pieces in a partially closed saggar with a chrome green glaze painted on the inside wall of the saggar.

Chrome oxide gives a burgundy/red when combined with tin oxide at cone 6 in oxidation (see Raspberry, Cranberry or Chrome Red glazes). This iconic cone 6 glaze needs a specific formulation to be successful. First, there needs to be a specific ratio of tin oxide to chrome oxide. Start with 0.1–0.5% chrome oxide and 7.5–9.0% tin oxide. Remember that these are targets that should help you, but you can get red colors to develop with less amounts of tin oxide (see Cranberry glaze with 3.5% tin oxide). Varying the amounts will give a variety of pinks to deep burgundy colors. The calcium content of the glaze should be high (10–15% or 0.7–0.9 moles). It is also important to have no zinc in the recipe or the glaze will turn brown. Alumina is also best if kept low. Some recommend no magnesium oxide (talc, dolomite, or magnesium carbonate) in the base recipe while others use small amount of MgO to achieve interesting red/burgundy colors (see Burgundy/Red glaze).

A thick application is best as a thinner coating may produce a gray glaze. You can also get chrome/tin reds at low-fire temperatures but they don't work well above cone 8. If you don't want to mess with the ratio of tin to chrome, an easy way to get cone 6 burgundy reds is to simply add 5–8% stain, such as Mason Deep Crimson 6006, (which contains calcium, chrome, tin, and silica), to a high-calcium base glaze (see Cranberry glaze). Adding cobalt carbonate to a chrome/tin or burgundy/red can push the glaze toward purple but adding too much will overpower the red (see Raspberry and Chrome Red glaze tiles with added cobalt carbonate). You can also alter the tone of the burgundy/red glaze with small additions of iron oxide, rutile, or manganese dioxide.

NOTE: Like many ceramic raw materials, chrome oxide is toxic in inhalation and ingestion. Be safe when using this material!