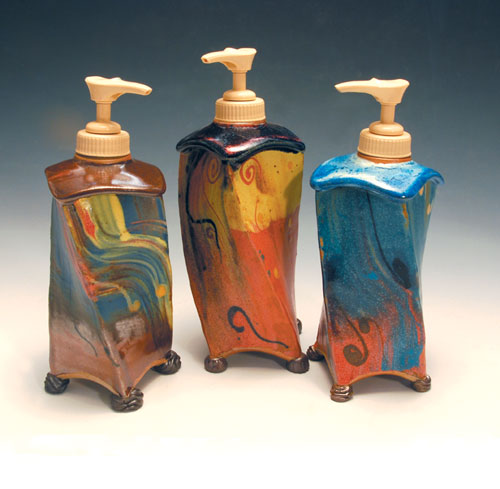 We recently got a clay extruder at the studio where I work. I had never really used an extruder and, so far, I have been having fun using it for my mug handles. But I know the creative possibilities are endless with this new tool and I am excited to play around with it some more.

In this post, I am presenting this excerpt on making extruded and altered lotion dispensers from David Hendley. - Jennifer Poellot Harnetty, editor 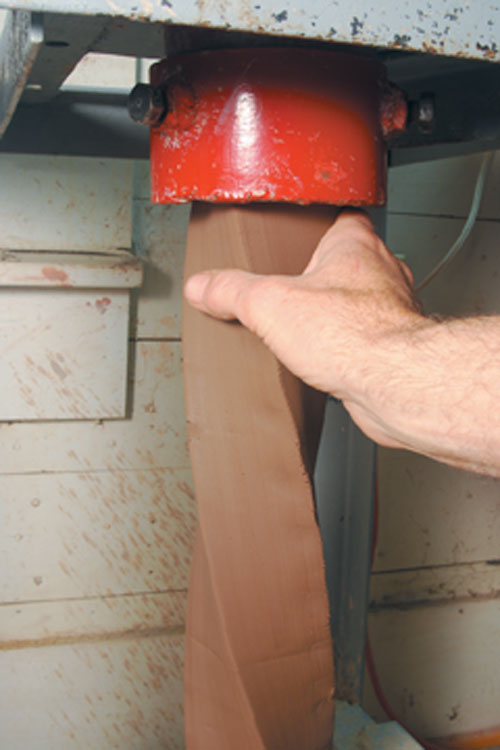 I have been using extruders in my clay work since 1974, after I built my first extruder and made my first dies. I immediately saw the potential for making new forms through extruding, and I've always had an extruder in my studio that I use on a regular basis. Of all the pieces I make, the extruder is used for about two-thirds of them-to produce either the main form itself or an added element for a wheel-thrown vessel. Even my pulled handles start out as extrusions.

Producing work with an extruder seems like it would enable you to make dozens of items quickly, but just the opposite is often true. Because of all the measuring, cutting, and joining, an extruded pot can require more time to make than a similar, thrown pot, but for some forms, extruding is the most expedient way to go. 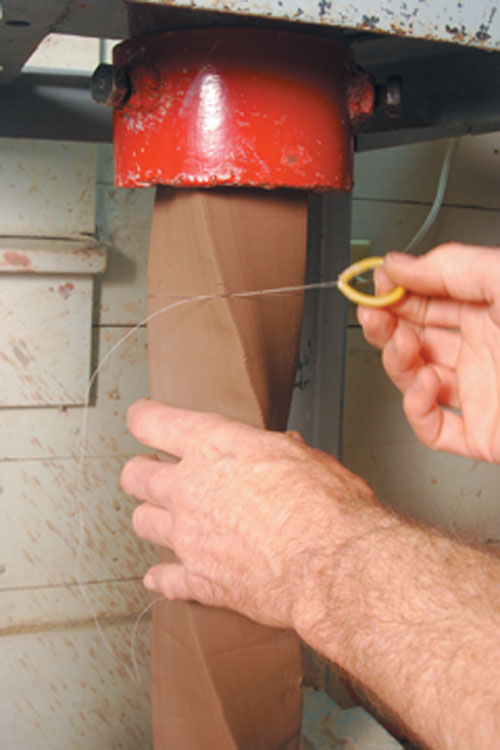 As for the dies, manufacturers offer many configurations; however, if you have more than a passing interest in using an extruder, I'd suggest making your own. Designing and making the die is part of the creative process and requires thinking from a different perspective since it's the negative space of the die that produces the form. With practice, you'll soon be able to shift your spatial thinking to where you can easily picture the three-dimensional piece you’ll get from the shape outline cut into a two-dimensional die, and vice versa. In fact, after spending a lot of time and thought designing dies, I often look at everyday objects and mentally picture what the die needed to make them might look like. 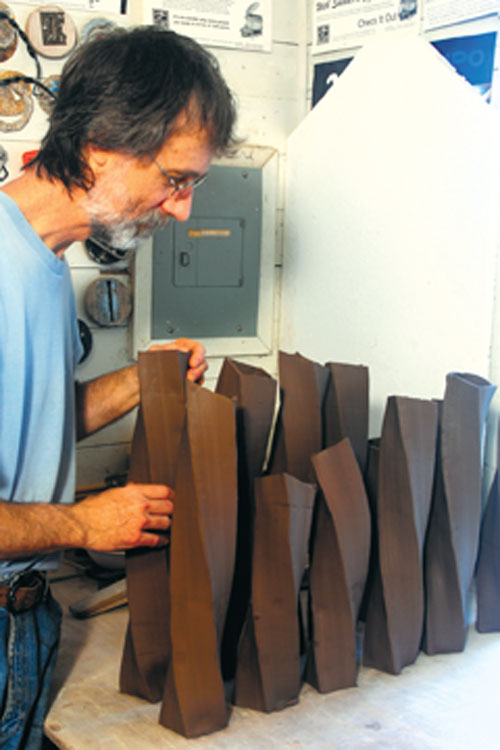 The form for the lotion dispenser is made with a two-part die that produces a 2½ inch square tube. Hollow square tubes are among the most common shapes extruded, but twisting the extrusion gives a sense of movement to the finished pot.

Lotion dispenser pumps, available from most ceramic supply stores, come in a variety of styles and colors. You’ll need to purchase those before you attempt this project so that you can make appropriate design and color choices. The collars need to be attached with adhesive after the glaze firing—check with your supplier for the best combination. 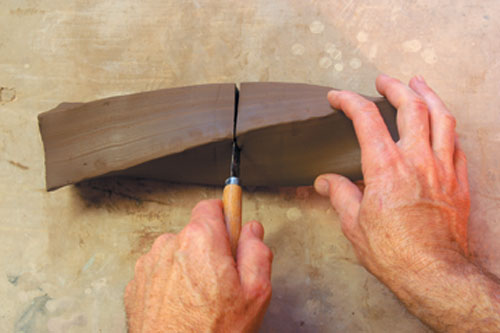 To make the lotion dispenser, load the die into the extruder and fill the extruder barrel with clay. To minimize air bubbles in the extrusion, shape the clay so it slides easily yet snugly down the barrel. Pull down on the lever of the extruder with one hand while twisting the clay as it exits the extruder with the other hand (figure 1). To keep a hollow form from collapsing in on itself as it is twisted, keep your hand right below the die, twisting the clay just as it exits the extruder, and move your hand back up as every inch or so of clay comes out. Any faint thumb indentations left on the clay from the twisting process will not be perceptible in the finished piece. While this process feels awkward at first, and takes some practice as well as a wide reach, I have no trouble doing the job by myself. You may want to have an assistant slowly pull the handle while you practice the first few times. It also takes some practice to get a feel for how much pressure is required to twist the clay as it comes from the extruder. Not much pressure is required, and most beginners twist too much rather than too little. 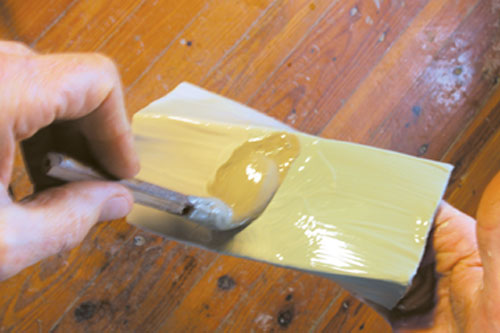 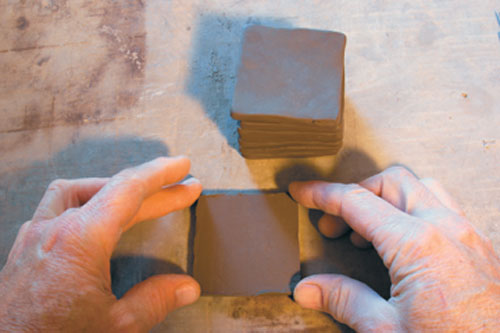 I always make at least 10 or 12 dispensers at a time because of the significant set-up and clean-up time when extruding through a two-part hollow die. Twisted extrusions are cut off in 18-to-20 inch long sections and set aside to firm up on a table (figure 3). In average weather, I allow the sections to dry for about an hour and then flip and allow to dry for another hour. Measure each extrusion and divide it into three 6 to 7 inch long pieces. Use a fettling knife to cut each extrusion (figure 4). 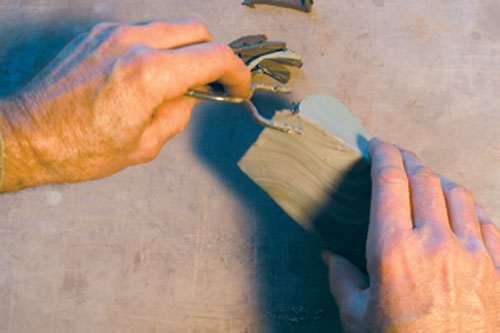 For my glazing technique, I apply slip glazes to the sections of twisted square extrusions before adding the tops and bottoms (figure 5). Allow the painted surfaces to dry for several hours before handling and continuing with construction. (After bisque firing, I glaze the top and insides of the dispensers.) 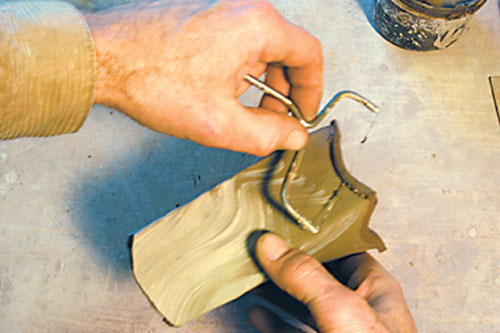 Once the slip glaze is dry, roll out a slab for the tops and bottoms of the dispensers. The slab should be slightly thicker than the walls of the extrusion. Cut the slab into 2½-inch squares, then round and smooth the edges and corners of each square (figure 6). Roll each square again to make it slightly thinner and wider (about 2¾ inches square). I roll past the edges to create a softer and slightly wavy edge. 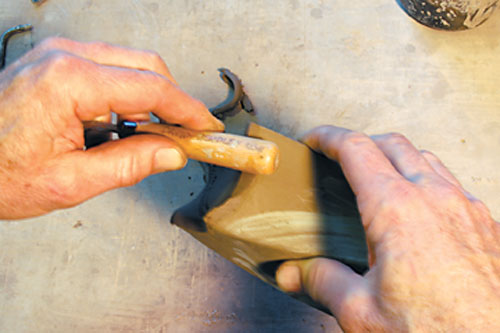 Next, cut raised arches into the top end of the extruded section (figure 7). On the bottom of the pot, cut the arch so the four corners become the feet of the piece. Score and slip the bottom edges, attach the bottom slab and trim the edges flush with a cheese slicer or fettling knife (figure 8). Roll the handle of a fettling knife along the edges of the bottom at a 45° angle to reinforce the joint and bevel the bottom slab (figure 9). 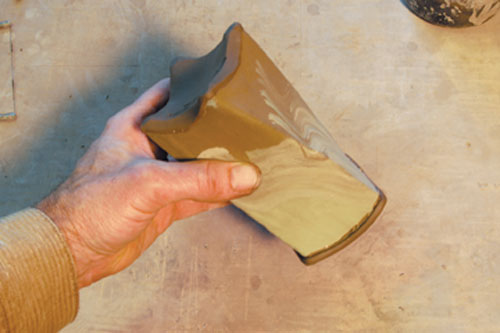 Add the top slab but don’t trim it, leave the overhang as a design element. Roll the top back and forth on the table to secure the join (figure 10), allow to dry for about an hour, then cover with plastic and leave overnight to equalize the moisture. 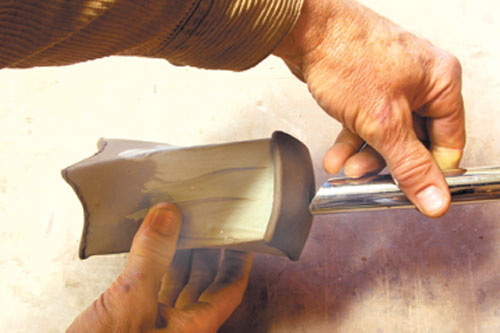 On the following day, use a piece of 1-inch tubing to make a hole in the center of the top slab for the lotion pump (figure 11). After the glaze firing, a glue-on collar and lotion pump collar will complete the pot.