Everything You Need to Know About Cobalt Blue Glaze Recipes Cobalt: The Bluest of Possibilities Dave Finkelnburg

Cobalt blue glaze recipes are in most potters' repertoires because they produce beautiful blue glazes. And what's not to love about that? But blue is not the only color cobalt produces. This colorant is actually quite versatile and can make glazes that run the gamut from green to purple, pink to blue violet, blues mottled with red, pink, and even an intense black.

In this post, an excerpt from the “Technofile” department in Ceramics Monthly, Dave Finkelnburg discusses the many possibilities that are possible with this multifaceted little colorant. Plus he shares some sweet cobalt blue glaze recipes. – Jennifer Poellot Harnetty, editor

There are four major factors that can affect a glaze’s color: the clay and slip beneath it, kiln atmosphere, fired temperature, and the glaze composition, including the colorants.

Oxide: A chemical compound containing at least one oxygen atom as well as at least one other element. Oxides result when an element combines with oxygen. Some raw materials are used in oxide form (like black cobalt oxide) while others form oxides during the firing process. In a glaze firing the oxygen usually comes from air, though in a fuel-fired kiln it may also come from carbon monoxide and carbon dioxide.

Carbonate: The compound of carbon and oxygen in a 1:3 ratio that gives a negatively charged ion. It is generally insoluble. When fired, the carbonate breaks down and CO2 goes up the chimney, leaving behind an oxide.

Valence Electrons: The unbound, shared electrons that move among atoms rather than moving within a single atom.

Mole: The base unit of measure for the amount of substance, either atoms or molecules. This unit is used in unity molecular formulas for glazes.

Cobalt Blue Glaze Recipes - Like a Slice From a Rainbow

When a fired glaze is exposed to light, the color of the glaze will depend entirely on which wavelengths of the light are absorbed by the valence electrons in the glaze colorants. The energy level of the valence electrons determines which photons it will absorb (absorb them all and you have black) or emit (emit them all and you have white). Emit only one wavelength and you have that color, just like taking a little slice out of a rainbow. Cobalt in a fired glaze usually absorbs all wavelengths of visible light except blue and this is why a cobalt blue glaze is blue.

However, two or more colorants in a glaze interact so that the wavelengths of light absorbed are different for the combination than for either colorant by itself. The interaction between atoms of one colorant, say cobalt, and another, say chrome, alters the energy level of the valence electrons of both elements. That is why we may add both cobalt (blue) and chrome (green) to get a glaze that is turquoise.

Flux elements such as sodium, stabilizers such as alumina, and even some glass formers also influence valence electrons. Because the glass formed in the glaze firing controls the interaction of the glaze elements, what you see in the mixed glaze is almost never the color you get in the fired glaze.

• CoO and Co3O4, although mainly thought of as colorants, are also strong fluxes

• Soluble in glaze melt, thus it has little or no opacifying effect

• Atmosphere and firing temperature do not change the color

• Very dependable color results in both oxidation and reduction conditions, and in fast and slow firing 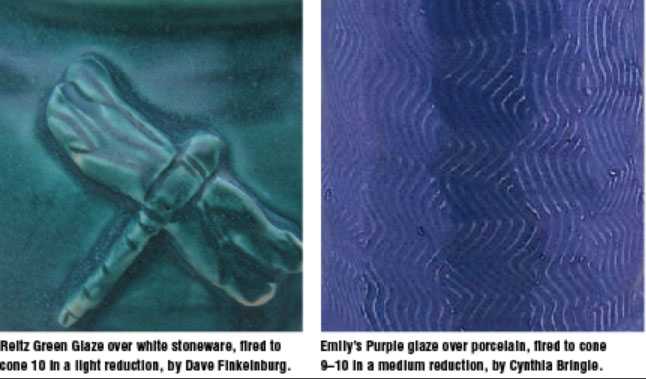 If we use lots of talc, dolomite or another source of magnesium in a cobalt glaze, a beautiful bubble-gum purple glaze can be the result! Magnesium oxide (MgO) shifts the wavelengths of light emitted from our fired cobalt glaze from blue to purple. Every mole of flux should include more than 0.2 moles of MgO to get purple. Make a line blend varying MgO content to test for the shade of purple desired. Lesser amounts of MgO will produce lavender, larger amounts combined with an opacifier will produce a strong grape purple.

Alumina and titania in a cobalt glaze will shift the fired glaze color from blue to green. Because a significant amount of alumina can be dissolved from the clay body by the glaze during firing, glaze thickness can cause the same glaze to turn blue (where thick) and green (where thin) on the same piece. Glaze layering can have a similar effect with layering of the cobalt glaze over a white glaze firing blue but the cobalt glaze alone firing green. Cobalt greens are invariably satin to matte rather than glossy glazes. These glazes are typically flux saturated and the matteness comes from precipitating crystals of the flux in combination with aluminum and silicon. The amount of titanium oxide used, either as rutile or titanium dioxide, influences the green color. While cobalt greens have been reported using as much as 7.5% rutile in a cone 9 glaze, 2% rutile is far more typical. Less rutile also helps avoid pinholes in the glaze. The two glaze examples given here, Reitz Green Glaze and Emily’s Purple, are both cone 9–10, but cobalt’s spectrum of effects can be seen at all temperatures. 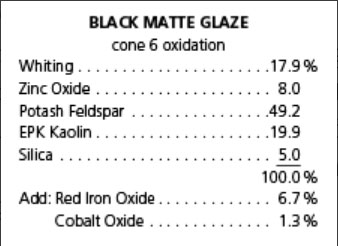 Black glazes are typically achieved using cobalt oxide or cobalt carbonate plus a blend of iron and other metallic oxides. Typical cobalt levels are between 1 and 3% and iron levels up to 9%. The total of all the colorant oxides need not be more than 10 or 11%. Cobalt should be used with care—it is expensive, and in thick applications, too much cobalt can make a glaze fluid enough to flow off the ware. Iron is not required to make a black glaze, but as an alternative, it is inexpensive, readily available, and non-toxic. One or more of the oxides of copper, manganese, and chrome are added in many black glazes. Glazes high in iron black tend to fade brown and glazes with high amounts of cobalt tend to fade blue over a white glazes. A simple black glaze can be made with 9% red iron oxide plus 2% cobalt. If other oxides are used, a good starting point is 4% iron, 2% cobalt, 2% manganese dioxide, and 2% copper oxide.