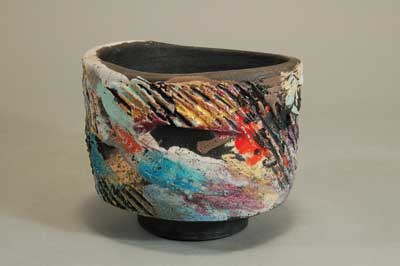 We get a lot of questions from readers about the raku firing process. I think raku firing intrigues many a potter because of the drama involved in the process. How cool is it to take a red-hot piece out of a kiln, see the molten glaze and hear the pings from the thermal shock. Oh, and then there's the flames! Who can resist the flames?

It is a common misconception that potters must use glazes specifically formulated for raku in a raku firing. But as Steven Branfman explains in this feature, you can use virtually any glaze in the raku process—from commercial to homemade, and low fire to high fire. - Jennifer Poellot Harnetty, editor

In my workshops, I get asked many questions but never “What is a raku glaze?” Why? Because everyone knows what a raku glaze is. Right? It’s a glaze that is labeled “raku.” Wrong. It’s time to expand your thinking and understand exactly what this whole raku glaze thing is about.

A raku glaze is any glaze you use in the raku method. It doesn’t have to be a glaze specifically designed for raku, formulated to fire at the temperature you fire your raku to, nor homemade or commercial. It can be most anything. The key to success is understanding the raku firing process and the ability to predict how a particular glaze reacts to that process.

Raku, as practiced in the West, is a low-fire method in which we quickly heat the ware, remove the ware from the kiln when the glaze has melted, and perform some type of post-firing process to the piece. The post-firing phase is usually an immersion in an organic combustible material to affect the final outcome on the glaze and the raw clay. Deciding when the glaze has melted takes practice and is best done by observation, though many potters use pyrometers to aid in making that decision. Raku is exciting, often unpredictable to the novice, and fun to do.

Glazing work for raku can be done by all the methods known—dipping, pouring, brushing, spraying, splashing, dripping, sponging—you name it. Glazes also can be used alone or in combination. Keep in mind that the application of a glaze has a direct effect on the result. 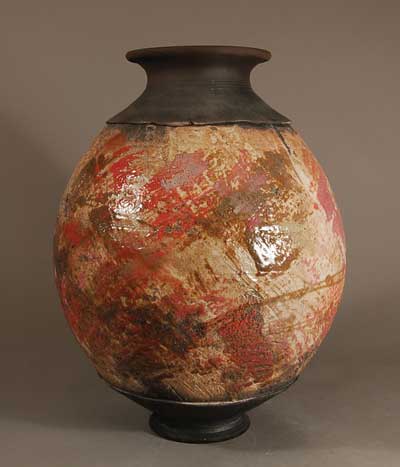 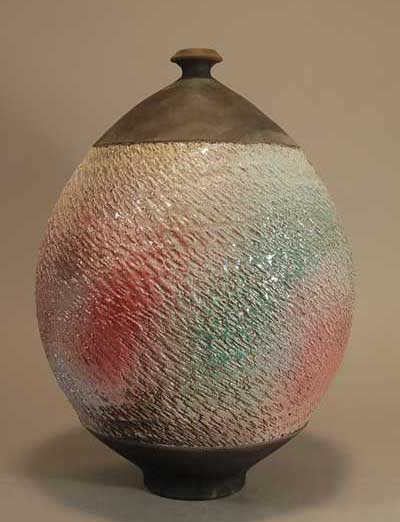 Glazes specifically designed for raku fall into two categories: homemade and commercially prepared. If you mix your own, you’ll find scores of recipes. Search the internet, ask friends, look in any book on glazes or raku, and look in magazines. In no time you will find more glazes than you could use in a lifetime. Of course, to mix your own glazes you must have a stock of materials, mixing paraphernalia, knowledge, and interest.

If this doesn’t turn you on there are myriad manufacturers that produce almost as many raku glazes. The advantage of using commercial glazes is that you are given instruction on how to use the glaze, you have a sample of the fired glaze to help guide your results, and the formulation (although not the results!) will be consistent time after time. Of course, commercial glazes are a bit more expensive than mixing your own.

Glazes used in the raku process need not be “raku” glazes at all. At its core, raku is a low-temperature firing method. The fact that we remove the ware from the kiln while the pots are hot and the glaze is molten is irrelevant. Understanding this opens up a whole new world of glazes. Any glaze that’s formulated to fire at the low temperature of raku can be used. First, you must decide at what temperature you are firing. Most raku is done in the cone 010–06 range. Begin by choosing glazes that both appeal to you in color and that fire in your range. You will have to experiment but I have never found a glaze that I couldn’t use successfully.

Other Glazes for Raku Pottery

In addition to glazes, slips, engobes, underglazes, overglazes, china paints, underglaze pencils, oxides, and stains are all viable in the raku process.

No matter what type of glaze or decorative material you use, raku is inherently unsafe for use as domestic ware. The rapid firing, removal of the ware, and subsequent post-firing phase all contribute to fragility, porosity, and thin, easily flaked glaze surfaces. Not all materials used in raku glazes are toxic. In fact, most are not. Confusion arises when you realize that over the centuries some of the most prized teabowls by tea masters have been raku fired. Be safe, and think of your raku ware as decorative and not functional.