Glaze That Glitters: A Little Experimentation Leads to Some Nice Low Fire Crystal Glazes Get the most out of your crystalline glazes! Deanna Ranlett

When Deanna Ranlett was in school, she wanted to find a low fire crystal glaze that looked like eye shadow. She liked the effects of some high-fire crystalline glazes, but could only fire low in the school studio.

Undeterred, she started experimenting with Mark Burleson's "Love Child" glaze. She tested and retested and came up with some sweet glaze recipes that gave her the eye-shadow look. In this post, she shares her recipes and some details on the experimentation that lead to them. - Jennifer Poellot Harnetty, editor

While attending Georgia State, I tasked myself with finding a glaze that encompassed my love of metals and glitter. I had started in metals and was glazing everything in an awful metallic glaze, but wanted something that looked like eye-shadow.

I started researching high-fire crystalline glazes but found they were too glossy and fired too high for our studio kilns. I tried low-fire shinos, crackles, cold-metal patinas, and even spray paint, but but the resulting effects were too dry, too matte, or just not a surface I wanted to touch.

I make abstract slab sculpture and I want viewers to interact by touching the pieces, so the glaze I wanted had to be smooth. I was intrigued by the “Love Child” glaze in Mark Burleson’s Glaze Handbook (Lark Books) that resembled a green metallic patina. I began by testing this glaze with every colorant and stain I had available, then eliminated and retested as needed. 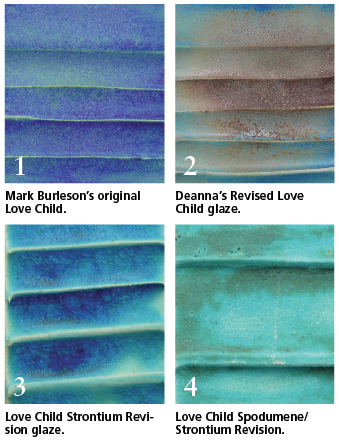 The original glaze had some shimmer but needed work to attain a crystalline surface. Experimentation led to increasing the barium and also increasing silica and EPK kaolin to slow the fluidity of the glaze. Many crystalline glazes contain zinc or titanium to aid crystal growth. After testing those, and finding the surface too dry, I added rutile because it is a source of titanium and contributes to the “floating” quality in variegated cone 6 glazes. Very fluid glazes can form crystals during surface cooling and rutile can help “seed” crystal growth, developing patterns as glaze flows and moves. With rutile, and the addition of colorants and stains, I fired until I was able to grow crystals, some tiny ones that actually resemble eye-shadow and some that grow as large as a half inch.

For this article, I fired the glaze in its original form with potash feldspar (figure 1). I also fired a reformulated version with various color variations (figure 2).

Next, I revised the recipe, replacing the barium with strontium (figure 3). Note: Strontium is not a 1 to 1 replacement for barium—74.8% strontium replaces barium so if you needed 10 grams of barium you’d use 7.48 grams of strontium. In the fourth version, spodumene replaces lithium and strontium replaces barium (figure 4), as many potters won’t use barium due to toxicity concerns. In the revised glazes, I found the strontium revision to be juicy and glossy, almost like a soda firing (figure 3). Adding spodumene created a very dry glaze similar to a slip or an engobe (figure 4). Note: These glazes should not be used on functional pieces.

This glaze is super runny. Cookies are your friend (both the edible kind that help when you’re angry that you have to clean shelves and the small clay slabs coated on both sides in kiln wash and placed under pieces on the kiln shelves). I have also used pieces of firebrick.

I use white stoneware, bisque to cone 2, and fire down. Since my work is purely sculptural this works for me. I have also tested on red earthenware which darkens the colors of the glazes. The strontium version is especially nice on red clay. Note: The glaze tends to shiver on low-fire white bodies.

WARNING: These glazes run. Place pieces on a catch basin or stilts, and you must use kiln wash. 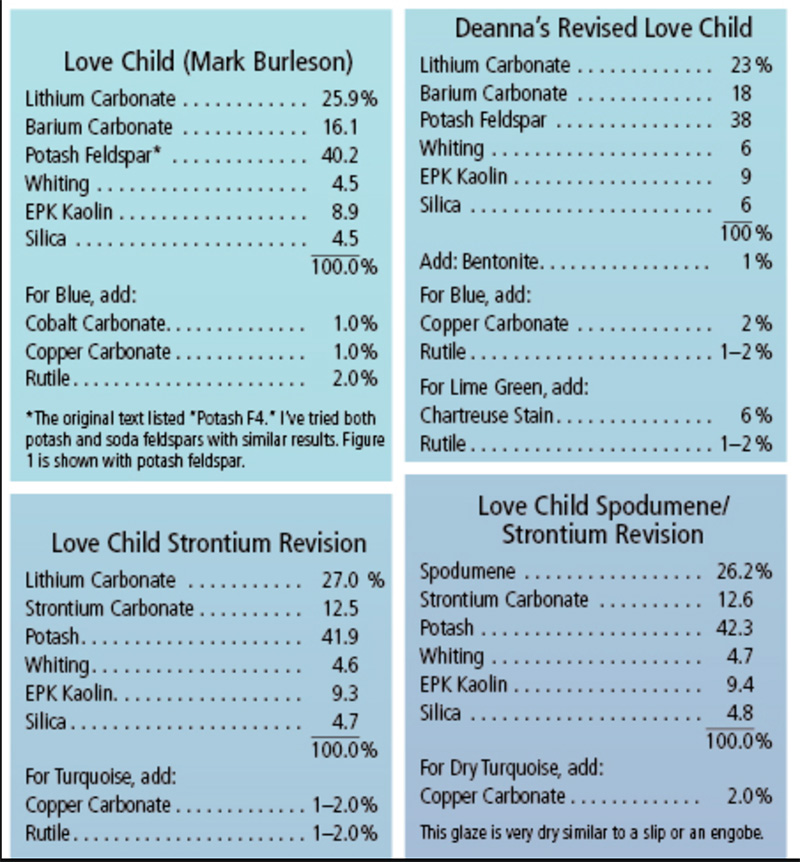