Every once in a while in ceramics you discover that the glaze ‘flaw’ or ‘improper’ forming technique you were once told was ‘undesirable’ or ‘incorrect’ turns out to be just the right technique to make your pots perfect. Chattering pottery while trimming seems to be one of those discoveries.

In today's post, an excerpt from our best seller 100 Tips, Tools, & Techniques for the Ceramics Studio, Brian Reed explains his techniques for chattering pottery, and how to make a homemade chattering tool from an old hacksaw blade. - Jennifer Poellot Harnetty, editor

Chattering pottery definition: When a pottery trimming tool skips rhythmically over the surface of a pot that is being trimmed on the potter's wheel, leaving a rippled texture instead of a smooth clean cut. Chattering is often caused by the pot being too wet or too dry for trimming. Chattering can be covered up by compressing the clay's surface with a pottery rib.

There are many types of texturing techniques that are used to enhance the surface of pots. I have tried many of them, from stamping texture, to using sodium silicate to make a crackled surface. My first exposure to chattering pottery was watching someone at the local co-op use a large drywall knife or a large throwing stick to open a large shallow bowl using the knife edge. This caused a jumping pattern in the wet clay that made for a nice ripple effect on the glaze once finished. I tried it with a long throwing stick and enjoyed the accidental nature of the pattern.

I attempted this on a leather-hard bowl with a small bent-knife tool to make pin dots, and soon after discovered the possibilities of this wonderful technique. I did further research on chattering pottery and even learned how to make my own tool from a hacksaw blade.

How to Make a Homemade Tool for Chattering Pottery

I have never seen a tool exactly like this before for chattering pottery. To make the tool, wearing goggles/safety equipment, take a hacksaw blade, heat it, and bend it so it breaks in half. Note: steel is brittle and if it is not heated it will break while being bent. Next, holding the blade with a pair of pliers to protect your hands from sharp edges and heat, grind the teeth off of the blade side so it won’t cut your hand. Then heat up the blade where you want to make your 90° bend. It needs to be right at red hot to bend properly without breaking. Using two pliers, bend the blade to 90° then put it in water to cool it down. To sharpen and shape the cutting edge, use a grinder again. You can make any shape blade you want. I would encourage experimenting on what you like best. 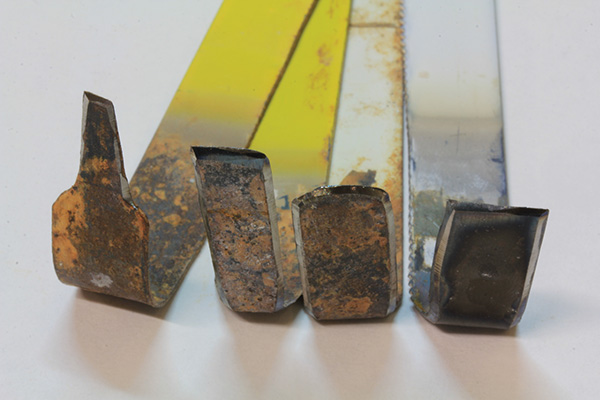 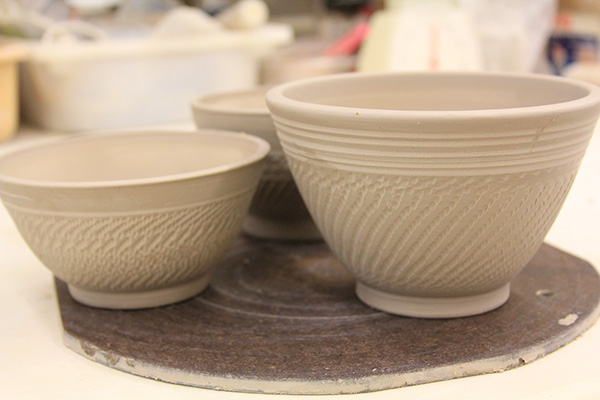 How to Chatter Pottery

Your pot needs to be at least leather hard, or a little past leather hard, before chattering. If it is too soft, you can easily cut through the pot with the sharpened edge of this tool. Trim your bowl and burnish the surface. I do not do this every time, and it will work either way, but I think it makes for a better surface to work on. Maybe it is just my inner perfectionist coming out. Speed up the wheel; it needs to be going extremely fast for the tool to be effective on the leather-hard clay body.

Now pause and feel the vibration start; adjust the angle and speed to get the vibration frequency that you want. At this point you should also hear the sound. Now simply listen to the sound and move your tool slowly down the bowl toward the rim. You can move your hand slowly to connect all the chatter marks, or you can move your hand more swiftly and have the marks more spread out. You may want to try a large square cutting edge to make a block-type cut chatter, or perhaps a small pin-dot pattern is what you seek. If so, then you should employ a small rounded edge that tapers to a fine cutting edge.