Love it or hate it, trimming pottery (sometimes called pottery turning) can transform a weighty Earth-bound pot into one that is a pleasure to hold, look at, and use. So it is important for every potter to know how to trim a pot. But it takes some practice to learn the proper consistency for trimming pottery or how much to take off (we've all no doubt experienced the horror of trimming through the bottom of a pot we love).

When is a pot ready to trim or turn? It is not easy to give a definitive answer to this question, because the needs of different shapes and sizes of forms, types of clay and wares, and personal preferences of potters are too variable to sum up in a universal rule.

The answer ‘when it is leatherhard’ is too general. A better rule to apply would be ‘as soon as the pot is stiff enough to work on without it becoming distorted or damaged’. As a general guide, the base area that will be turned should be soft enough to mark with a thumbnail but not so soft that a fingertip will make an impression. The pottery trimmings should have the consistency of grated cheese – when squeezed in the hand, they will just stick together. If the trimmings are crumbly like grated chocolate, the clay is already on the borderline, and if they are like iron filings, it is too dry.

Trimming/turning tools have a sharp steel edge to pare away the leatherhard clay. Some are all metal with a right-angled blade, others are wire loops—also called ribbon tools—which I prefer. The one I use is a homemade loop of steel banding wire, which can sometimes be found discarded at construction sites.

Planning a Trimmed Foot Ring on a Bowl

Before you begin trimming pottery, it is helpful to make a few measurements and marks on the form as a guide to where and how much to turn.

Set the bowl upright on a flat surface and hold a pencil or stick upright against the rim. Mark the rim height either with a pen or with your finger (see A in illustration at right) on the pencil. Stand the pencil in the center of the bowl, and line up the near and far rims by eye. The difference between the mark and the rim gives you the base thickness at its thinnest point (B).

Look down the line of the wall from above the rim. Run a finger and thumb down either side of the wall to where it begins to thicken and mark that point (C). 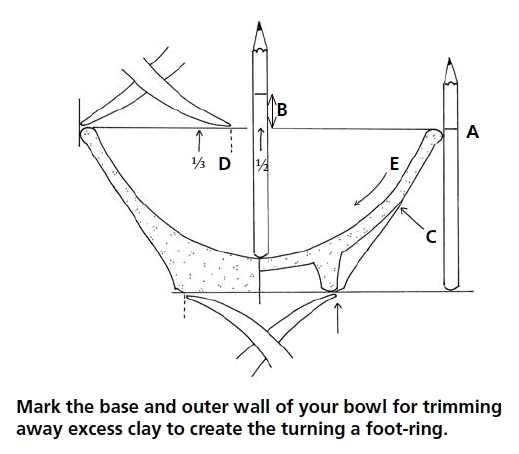 The diameter of the foot-ring will vary according to the shape, width, and style of the bowl, but as a rough guide, it will be between one-third and one-half of the rim’s diameter. Use a pair of calipers to measure this approximately (D). When you begin turning, with the wheel at a medium pace, this caliper measurement indicates the foot-ring width.

Lastly, and most importantly, study the curve and line of the bowl’s interior (E). You are aiming to reflect this in the turning and you should keep it in your mind’s eye throughout the process.

Place your pot as close to center as you can. Use the concentric rings on the wheel head to guide you, but you may still need to adjust the pot’s position. An invaluable ceramic trimming technique, tapping into center is the fastest way to center a pot (figure 8). However it is difficult to describe and takes practice to learn and do quickly, so try it with a plastic bowl for a few minutes every session.

Revolve the pottery wheel at a slow/medium speed and hold a steady fingertip level with the base of your upturned pot, keeping it close enough so that the pot brushes your finger on the widest point of its trajectory. Focus the eye on the edge of the base (where the turning is to be done), not on the rim of the pot. Count ‘1-2-1-2’ each time the pot touches your fingertip to pick up the rhythm. Tap the pot towards the axis of the wheel on the beat ‘1-2’. Tap slightly in the direction of spin. If the pot is small and light, apply light pressure on top of the pot with a finger of your other hand to act as a brake. Once centered, stop the pottery wheel and hold the pot firmly with one hand while you press three small coils of clay into place around the rim to fix it to the wheel (figure 9).

Use calipers to mark a light ring on the base for the outer edge of the foot-ring (figure 10).

With the wheel spinning at medium pace, turn a groove to establish the width and approximate depth of the footring (figure 11). Note how the fingers of the left hand bridge the pot and turning tool throughout, acting as a stabilizer. The speed of the potter's wheel should be brisk and you should hold the turning tool firmly at a 3 o’clock position, using the slip tray to brace your forearm. 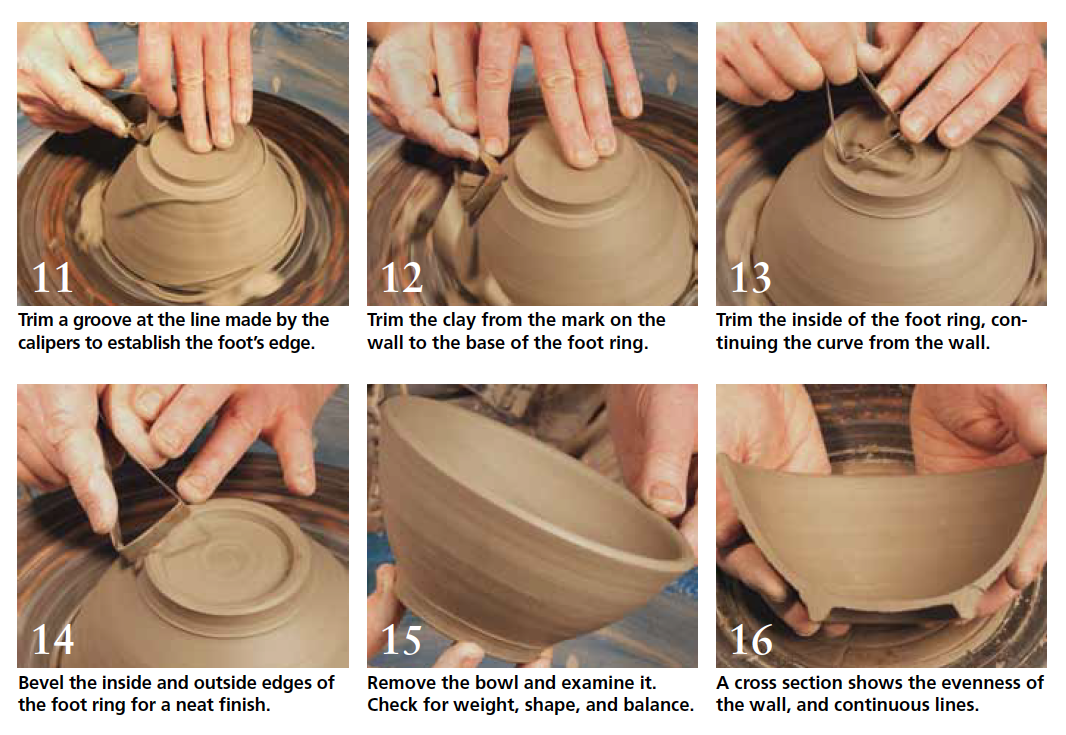 Now trim the clay from your marker on the wall (C in the illustration above) to the base of the foot-ring, using the memory of the bowl’s internal form to guide you in terms of the curve you want to achieve (figure 12). Note: When the pot starts getting too dry, the turning tool ‘chatters’ or vibrates on the surface, causing ridges. Dampen the surface with a sponge and continue.

Keeping in mind the thickness of the base you measured earlier, trim inside the foot-ring (figure 13), taking care to continue the curve of the form and giving the foot-ring a similar weight, thickness and quality to the form’s rim. To prevent too much downward pressure against the base, use the tool at a very shallow angle. Give the pot a functional and neat refinement with a shallow bevel to the inside and outside edges of the foot-ring, smoothing it with a firm fingertip (figure 14). Before you remove it from the wheel, have a look at the bowl at eye level. Mentally remove the foot-ring and examine the shape. Does it reflect your memory of the interior form accurately? 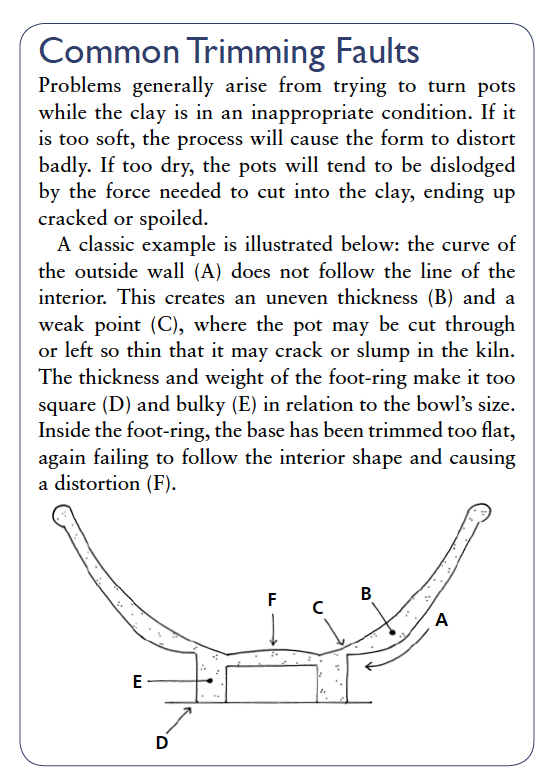 Now remove the lugs of clay and look at the bowl (figure 15). Rock it from side to side in your cradled hands. It should feel balanced, not bottom-heavy, its weight evenly distributed. Run a thumb and forefinger down either side of the wall to feel for thicknesses. Compare the interior and exterior curves. Look at the pot in section, to examine the evenness of the wall (figure 16). Notice how the shape now corresponds inside and out, as well as the subtle but vital increase in weight at the foot-ring and the rim.

Richard Phethean has been a potter for more than 30 years. He has been teaching at University of Westminster, Harrow College since 1995 and a Resident Potter at Sibford School since 2001. This article is an excerpt of his book Throwing, co-published by The American Ceramic Society and A&C Black, London.