Most potters in the United States are very familiar with the loop trimming tools that come in the basic pottery tool kit, but after reading today’s post, they might want to investigate a particular type of Japanese pottery tool: kana or kanna trimming tools.

Kanna trimming tools do not have a loop, but are one piece of metal that is bent at various angles at the end(s). This means that the tool has more potential edges that can be used to trim a variety of angles. In this post, an excerpt from the Ceramics Monthly archive, Maggie Connolly explains how to make kanna trimming tools in about twenty minutes! –Jennifer Poellot Harnetty, editor

Kanna (traditional Japanese trimming tools) that do not have a loop but are instead open, which results in the tool having more edges that can be used to trim a variety of different angles.

Tokyo University of the Arts’ Professor Ryo Mikami is a master of the Japanese aesthetic of wabi-sabi. In addition to making his own clays and glazes using local materials, he also makes his own kanna, which are the traditional Japanese trimming tools. Unlike the Western counterparts that consist of a loop, Japanese kanna are open, creating more edges that can be used to trim for different effects. Kanna are very simple to make and only require the most basic of supplies: a vice grip and/or pliers, a grinder, and a file. They can be made within 20 minutes. 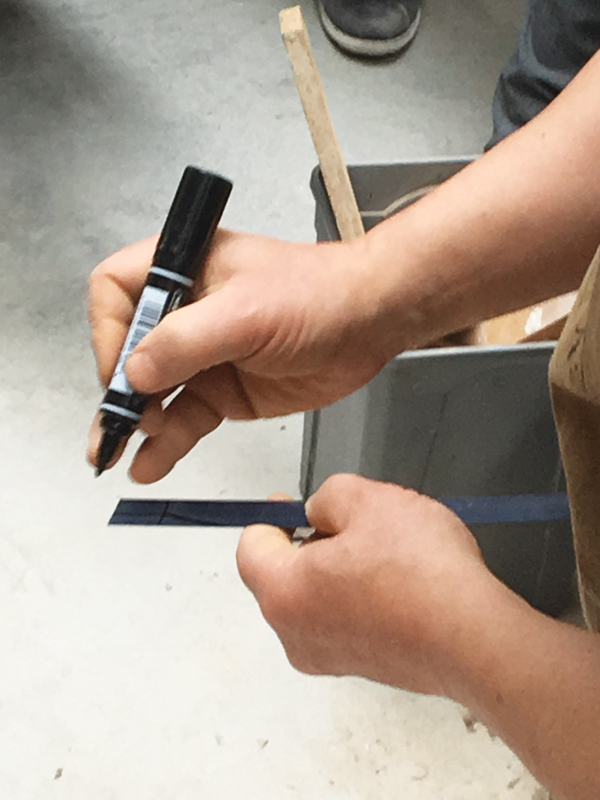 You will need steel strips that are approximately 0.8 millimeter in thickness—any thinner and the kanna will not be able to remain rigid while trimming the leather-hard clay; any thicker and making the kanna becomes difficult. The size of the kanna depends on the size of the work you intend to trim. For extra-large work (exceeding 44 pounds, or 20 kilograms), the kanna thickness should be increased by a half a millimeter.

Kanna can be made into any shape. The most basic shape is a good starting point (1). It is important that the width of the blade is less than the width of the handle, because the crook of the blade (the dotted line A) is easiest to control and therefore the most used part of the kanna, and cutting in on the metal strip at an angle allows for trimming a foot at a perfect 90° angle. If you want to make a kanna tool with a curve, that can be done by using pliers to bend the metal strip at an angle. Note: The highlighted green area on the left side is appropriate as the trimming edge for right-handed potters trimming on a counter-clockwise turning wheel. In the case of Japanese or Korean style clockwise turning wheel with left-side trimming, the highlighted area needs to flip to the right side. 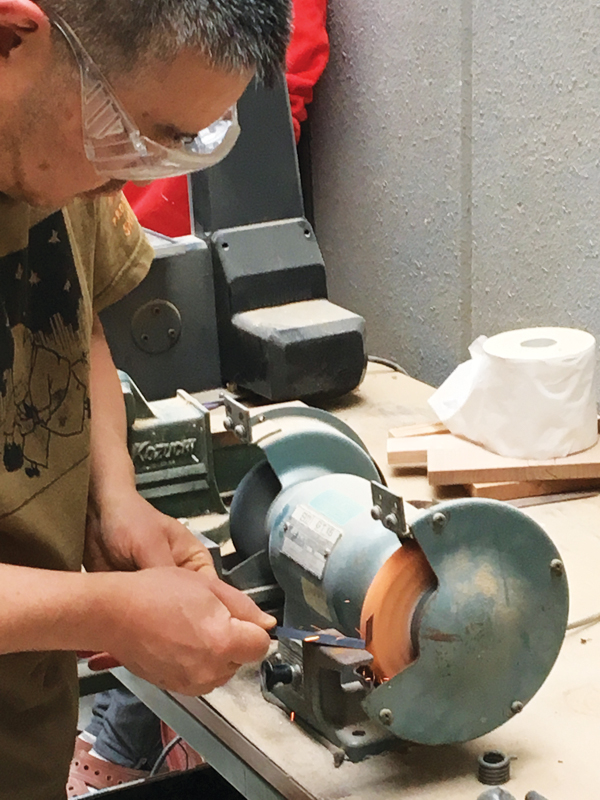 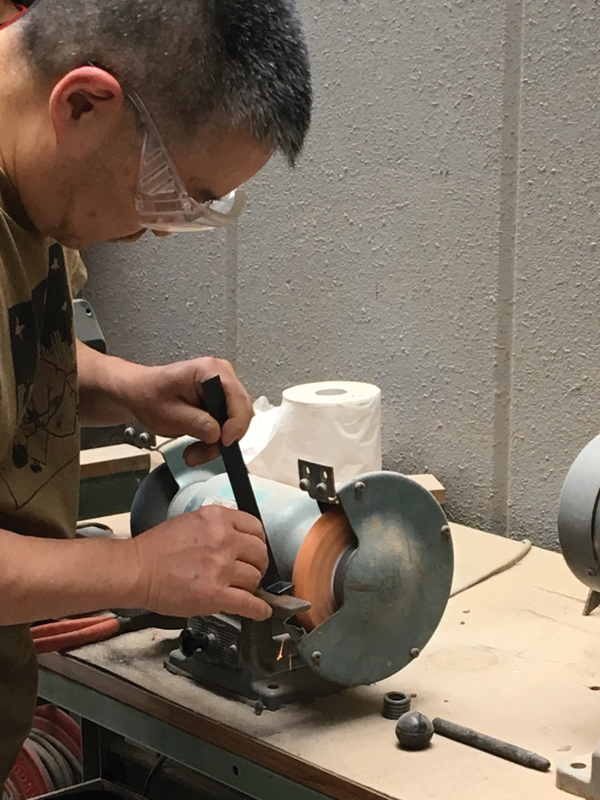 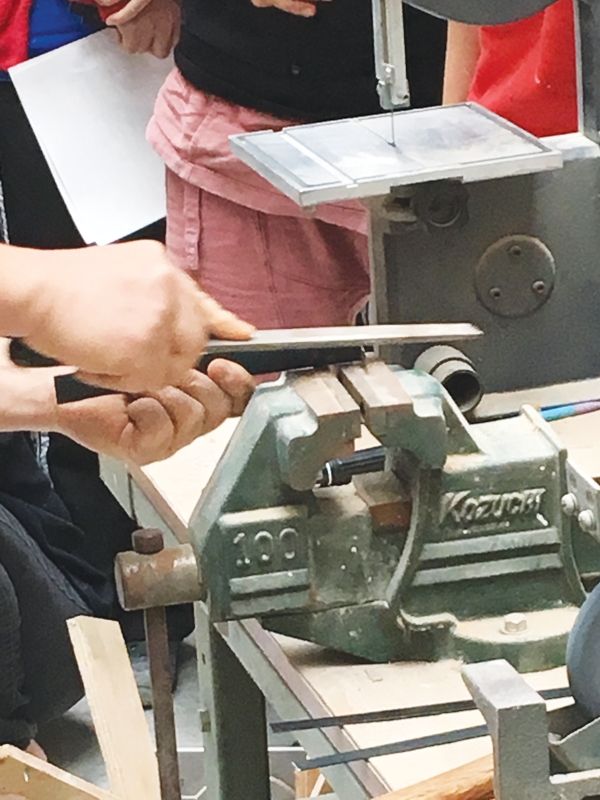 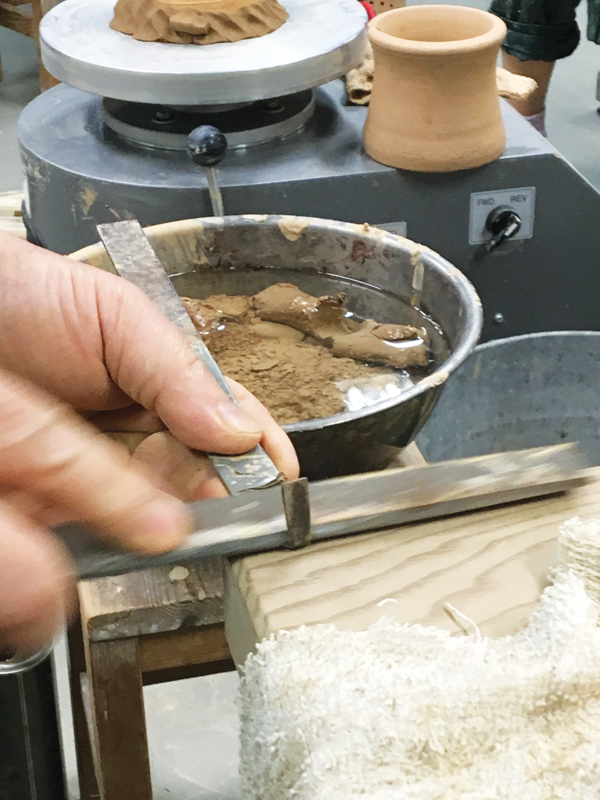 Professor Mikami starts by marking the desired kanna shape on the metal strip (2). Put the metal strip in a vice grip at the marked dotted line (A); bend it toward you so it is flush with the surface of the grips; use a hammer to finish the bend, creating a perfect 90° angle.

Use a grinder to trim down the previously drawn-on shaded area of the kanna (3, 4). This is the main edge of the kanna that you will use to trim. The inside crook (B) is great for finding the center of the foot, while the outside edge of the crook (C) is to plane a surface; the inside edge (D) can also be used to plane a larger surface, especially if the base is accidentally cut at an angle. Because it is the hardest edge to control, the outermost edge of the blade (E) is perfect for chattering.

Finish off the bladed edges of the kanna with a file (5, 6). Make sure to file the blade from both sides to create an extra fine sharpness. Over time, the blade will dull, but the beauty of the kanna-trimming tool is the ease with which you can use the file to re-sharpen it. If you find the metal handle uncomfortable to hold, wrap it with electrician’s tape for a more comfortable grip.

the author Maggie Connolly is a doctoral student studying ceramics at Tokyo University of the Arts (Gedai) in Japan.