Appears in the Mar/Apr 2019 issue of Pottery Making Illustrated. 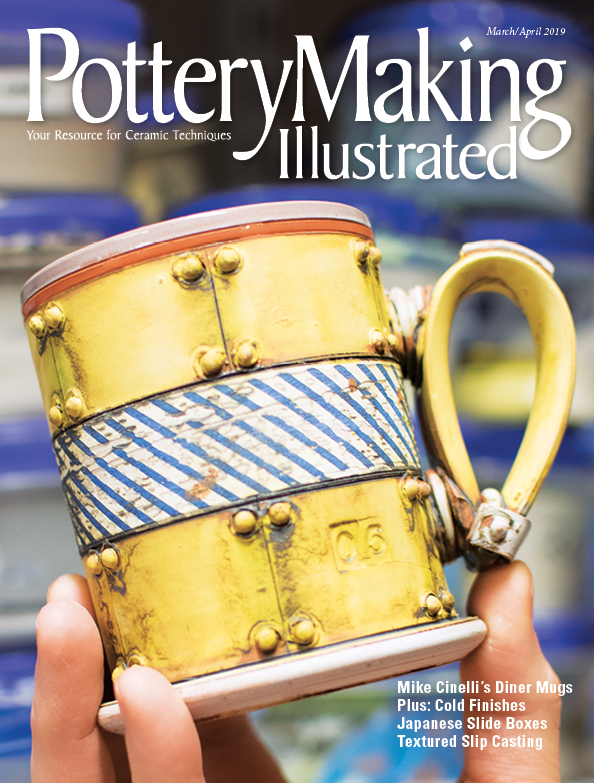 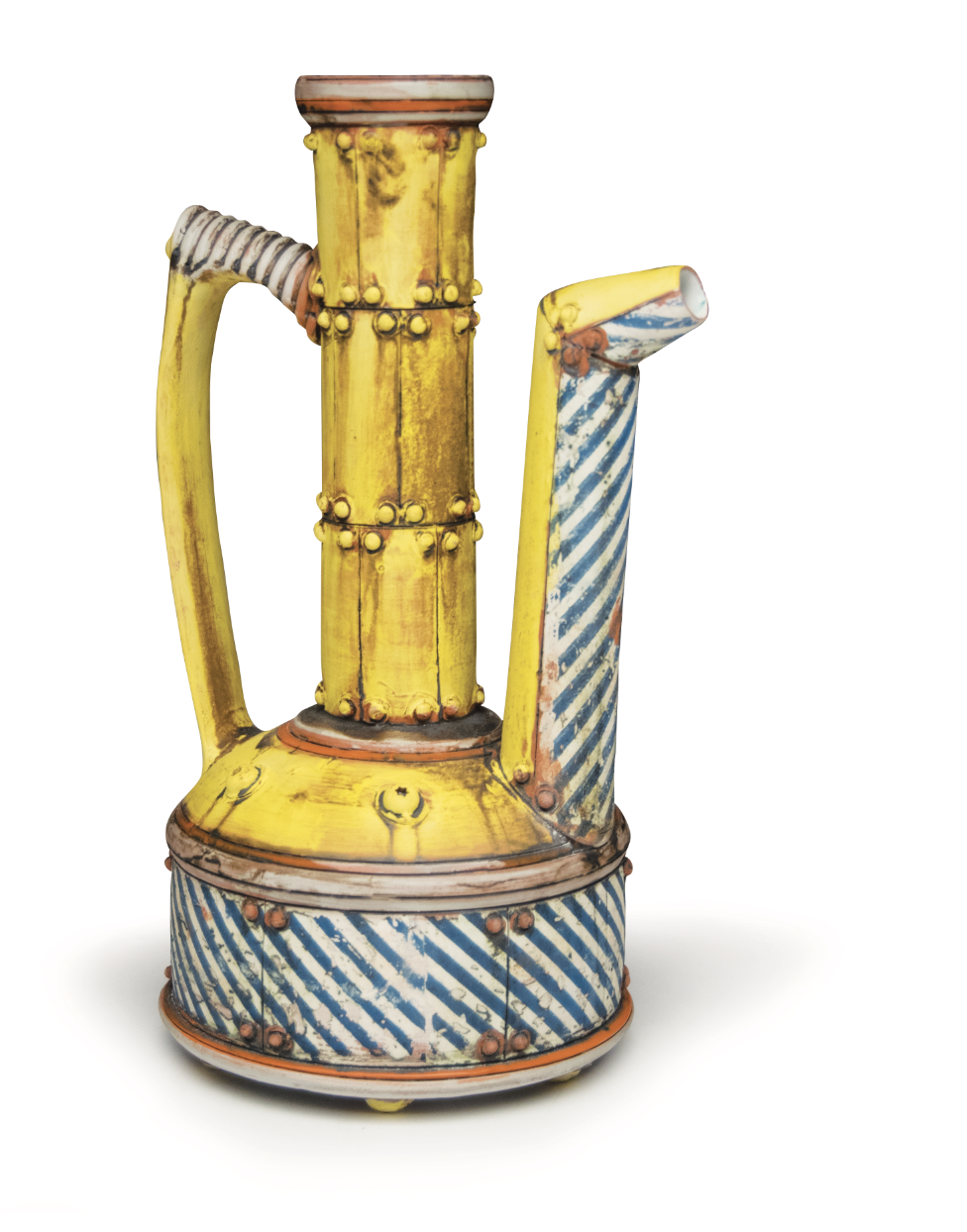 I’ve always been fascinated with the tangible realities of history and the boundless fantasy of science fiction. In my work I attempt to create objects that live in that fictionalized universe where those two opposing realities have come together.

Sketching and developing forms is where nods to history come into play in my work. I draw inspiration from strong, familiar silhouettes. My love of historical ceramics began with an appreciation for Greek pottery, but has slowly expanded to many more regions throughout the world, such as beautifully distinctive pottery made by the Nazca of Peru.

For my mugs, I draw on a more contemporary, but equally ubiquitous form, the diner mug—an object I consider a modern historical form.

I use 1 pound of a smooth, low-fire earthenware when throwing the body of a mug, which starts as essentially a simple cylinder. A rule I try to hold myself to is simple form, complicated surface. The finished mug body is typically 4½ inches tall and 4 inches in diameter after shrinkage. 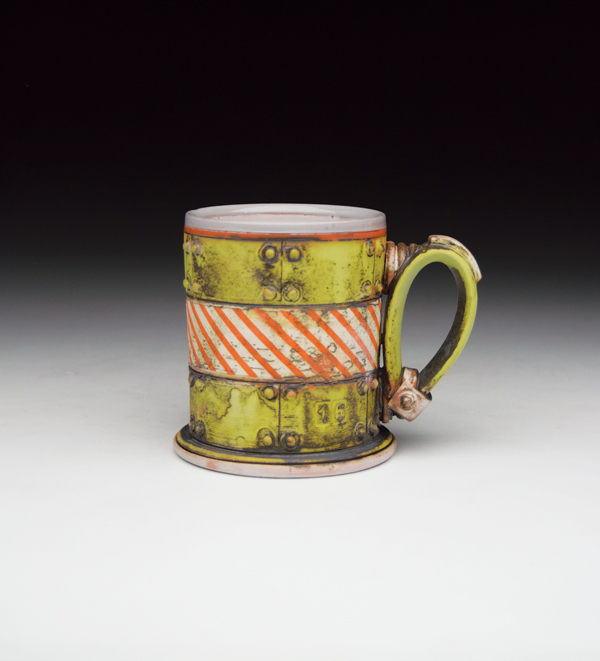 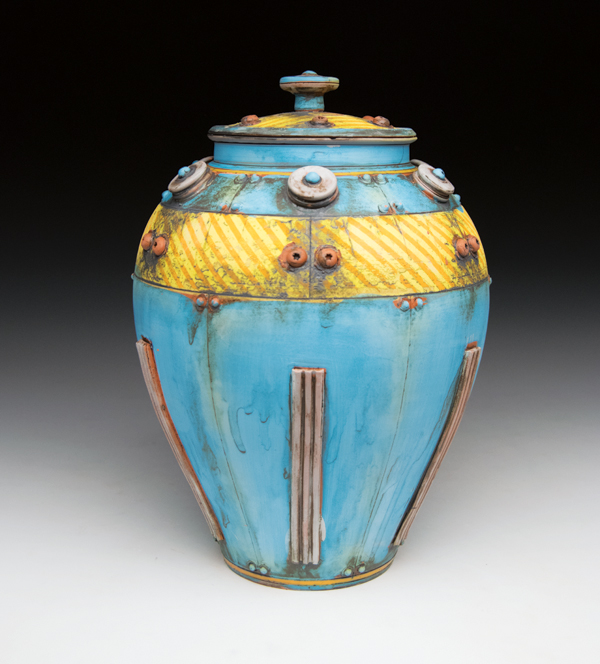 Once the body of the mug is leather hard, I move on to creating the surface. Good form should always be considered to avoid “putting lipstick on a pig,” as I’ve heard from Matt Long, but getting to the surface is usually my favorite part. This is where I bring the more contemporary influences of science fiction and comic books into my pieces.

The surface is a combination of incised lines, underglaze transfers, sprigs, and terra sigillata. The underglaze transfers are made with commercial underglaze. I prefer the range of colors offered by Amaco, but any underglaze works in this process. I take an unopened pint of underglaze, directly add silkscreen medium (1), then blunge the mixture heavily. This thickens the underglaze to an ink consistency and extends the drying time to prevent clogging the screen (2). These are then printed on newsprint and are able to sit around indefinitely until they are needed. 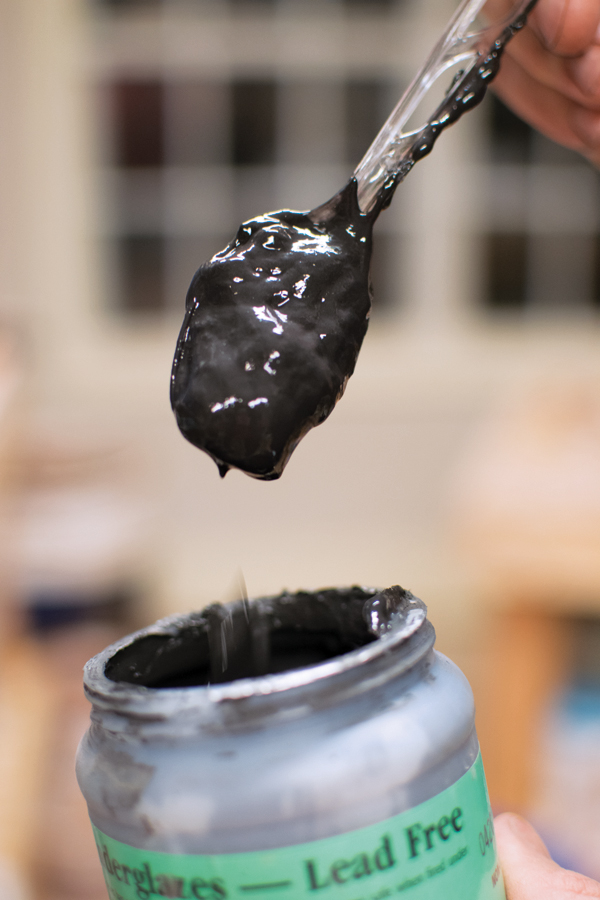 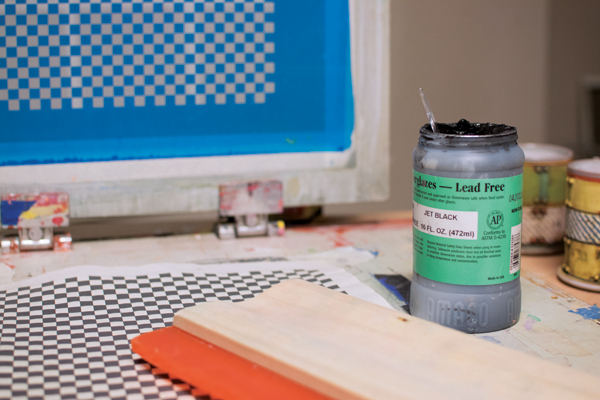 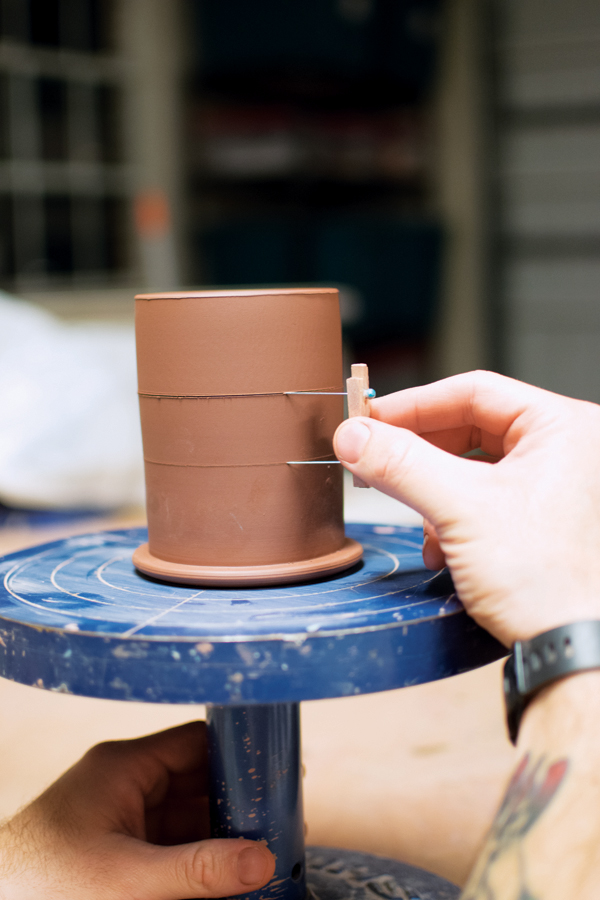 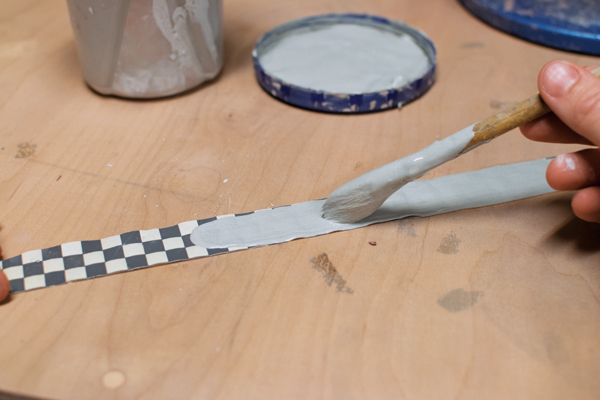 I come back to the classic rule of thirds when making a composition. I’ve created some specialized double-needle tools (made of sewing needles, wooden dowels, and super glue) that are specific widths to fit my screen-printed underglaze patterns. I use these tools to create a band in the middle of a mug (3), making three roughly equal divisions of space. I then measure and cut a strip of screen-printed newsprint and apply slip to both the newsprint and mug (4). They are allowed to dry for a few seconds, enough time to lose their sheen, before the newsprint is wrapped around the form and compressed with soft silicone rubber ribs. Once dry to the touch, the newsprint is removed to reveal the pattern (5). The drier the transfer is allowed to become, the cleaner the transferred image will be.

My inspiration for color combinations comes from a life-long love of reading comic books. Early comic books were restricted to basic, bold colors, leading to characters designed in triadic color schemes. These allowed maximum visual impact, while using minimal colors. Typically the heroes were composed of primary colors, and villains were designed with secondary colors. This is a color-scheme convention that still holds up today. In considering color for my own work, once again, I institute some basic rules for my selections. The color choice of a pattern applied to the pot cascades into my other color choices when finishing the pot (6). For example, a red pattern on the band would lead to applying shades of either yellow or blue on the main panels. This would then dictate the choice of the highlight band beneath the rim, with the yellow or blue leading to very different decisions. 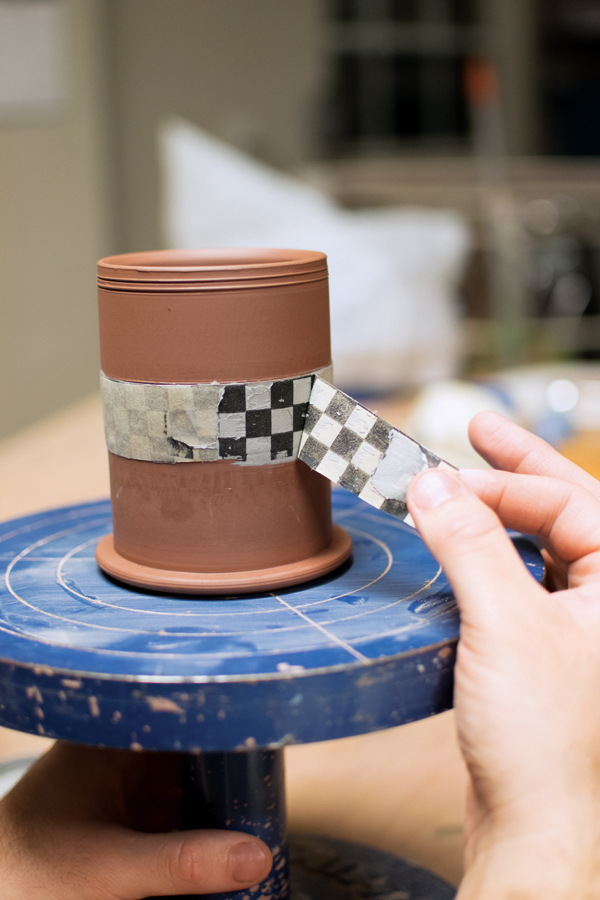 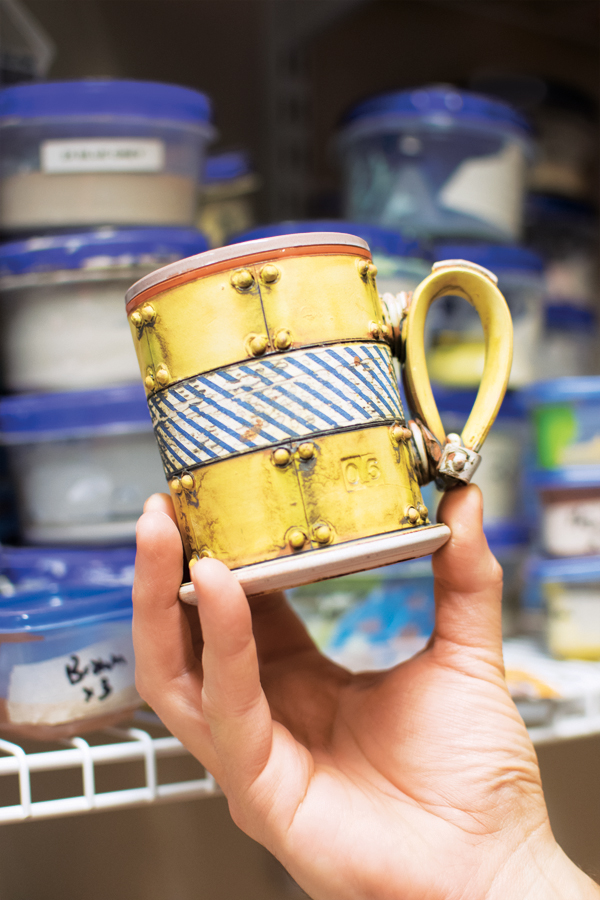 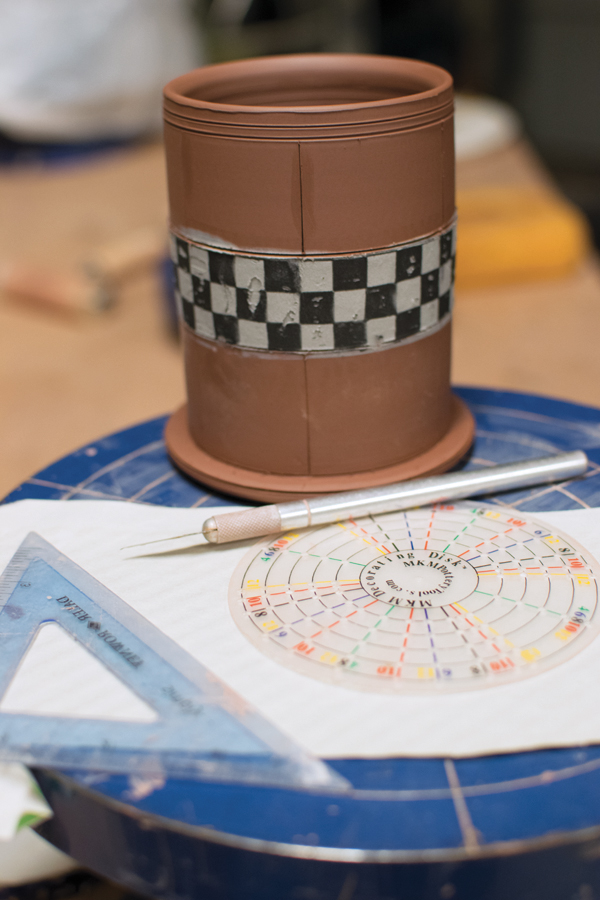 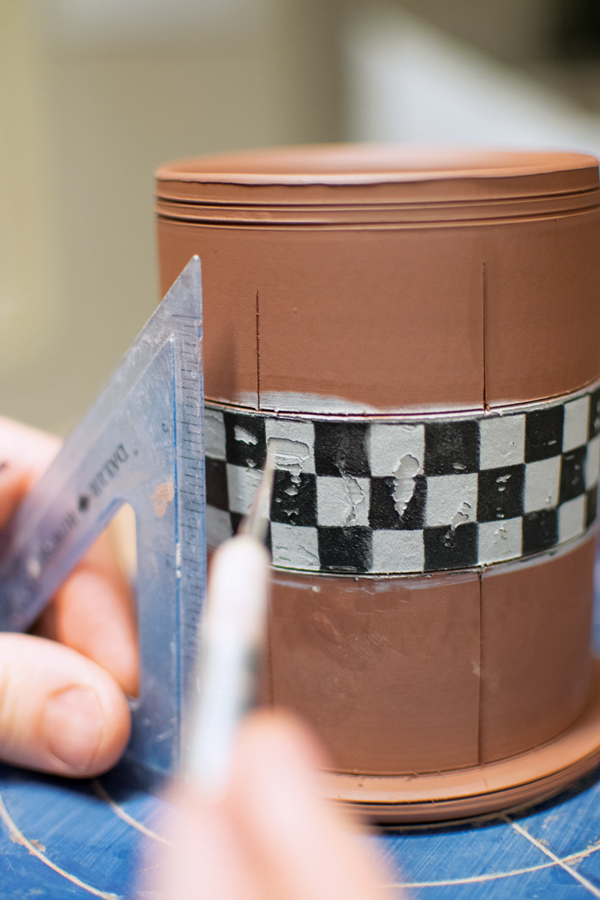 After the transfer is dry enough to touch, I begin to incise lines to divide the pot. A small band is created beneath the lip, which will contain the third accent color once completed. I equally divide the pot into sections using a decorating disk (7) and use a dull X-Acto blade and drafting triangle to incise the lines (8). These lines serve a few purposes: creating another pattern through repetition, making a slight textural difference on the surface, and adding actual physical depth. Sprigs of rivets are applied with the same thoughts in mind—creating a three-dimensional pattern. These sprigs are scored and slipped using a slip trailer filled with a slip made of my clay body, then attached to the mug (9). I allow the slip used in my attachments to bleed through, hopefully mimicking welds but also allowing process information to be visible. All of these steps are much easier to complete before the handle is attached.

The handle is constructed of multiple thrown and extruded parts. The struts that project off the mug and connect to the handle are thrown off the hump and ribbed to created the texture (10). They are dried by using a torch briefly to allow handling and then cut off and set aside. I’ll usually throw a group of 12–18 mugs, and once the surfacing is done, I’ll throw a corresponding number of these struts. They are cut in half, slipped and scored, then attached to the mugs. I typically let these sit overnight to allow proper adhesion. Clay straps are extruded and cut down, slipped, scored, and folded over to become the handle (11). The resulting loop is then slipped, scored, and attached to the mug. The interior seam receives a small coil (12), helping strengthen the joint while also adding a visual detail. After the handle is appropriately placed, outer details are attached to the handle. 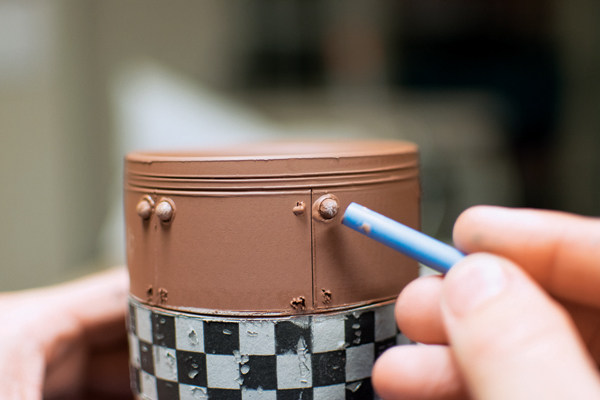 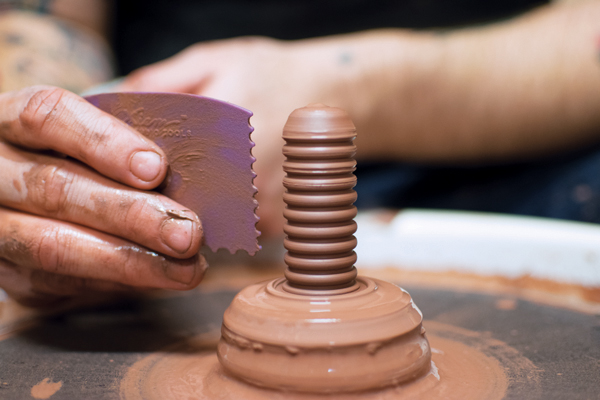 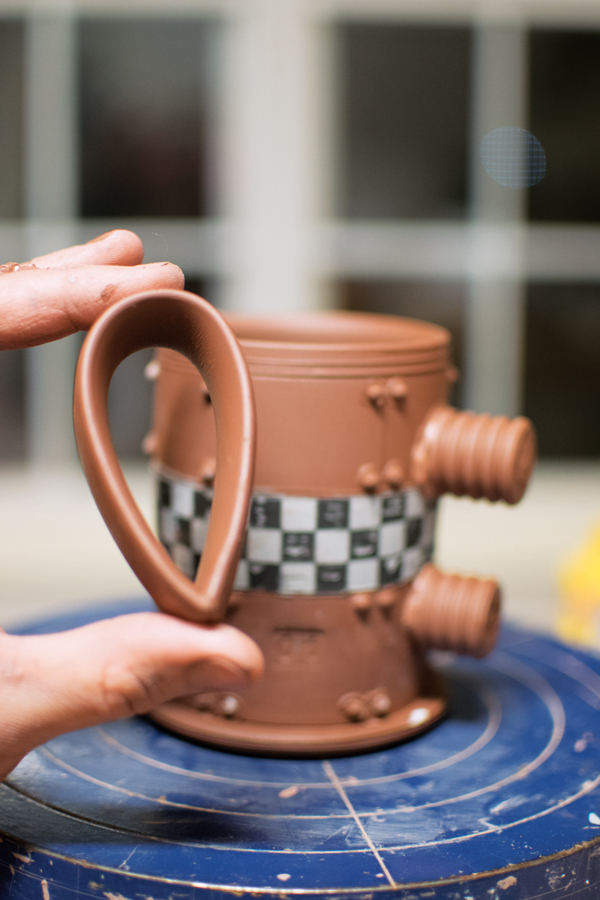 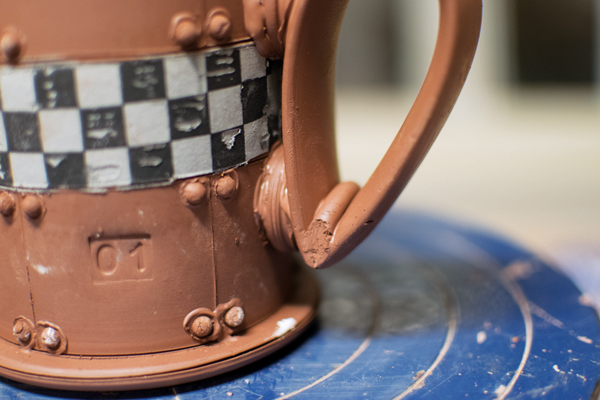 Once the construction of the pot is finished, it’s allowed to dry slowly to prevent cracking in the connections and joints until bone dry. The large blocks of color on my pots are applied using an OM 4 ball clay-based terra sigillata that’s colored with Mason stains. I use approximately 1 tsp of Mason stain to 1 cup of terra sigillata base. Three coats are applied to the bare clay areas (13), and allowed to dry between each coat. The final coat is burnished to a shine. The terra sigillata is a nice call back historically, specifically the pottery of ancient Greece. The surface of those pots were nearly exclusively created through the use of terra sigillata. The sigillata also allows for a nice, smooth surface with lots of color options. I’m not overly careful with the application of the terra sigillata. Thin areas allow for the red clay to bleed through, further enhancing the worn aesthetic I look for in my finished work. Once finished, the pots are bisque fired to cone 04. 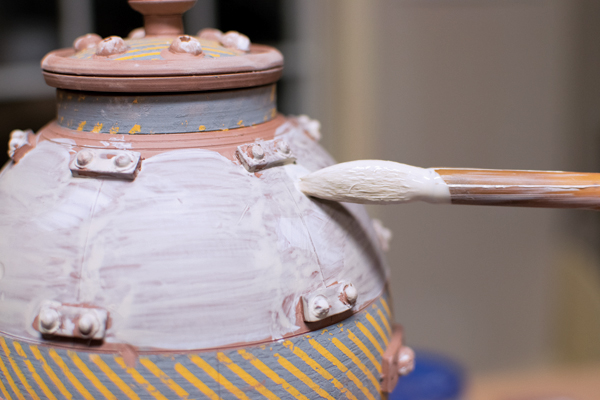 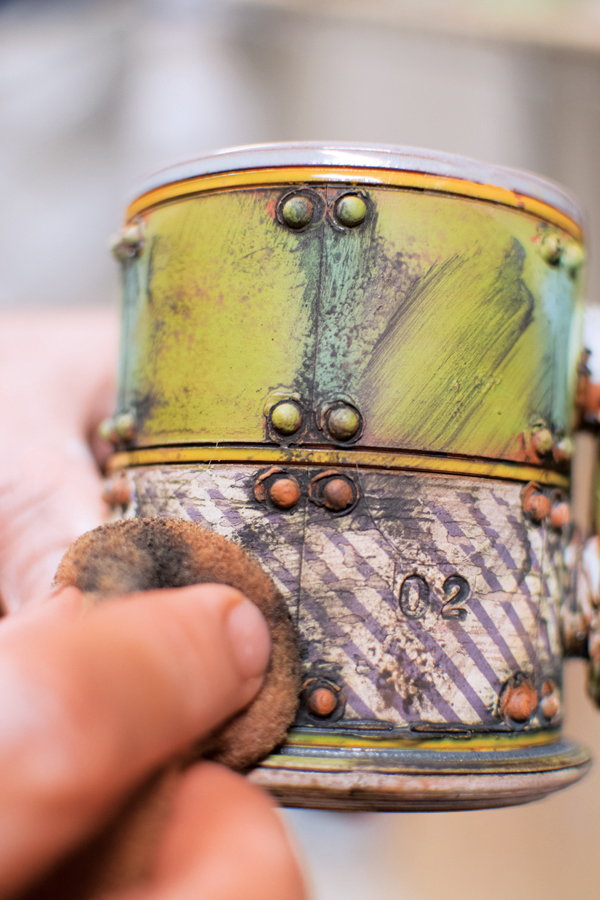 The interior is first lined with a glossy, white, food-safe glaze. I find the white shows off the interior liquid but also heightens the vibrancy of the exterior colors. The exterior is completely covered with a wash of Ferro frit 3124 and black copper oxide (14). When the excess is sponged off, the nooks and textures created by the lines and rivets allow lots of places for the patina to collect. Typically I apply a band of underglaze under the rim while the pot is still in the greenware stage to tell my future self my intention for that highlight color after the bisque. If the band was painted with underglaze, it gets covered with a clear glaze. If not, it’s coated with a commercial glaze to add the third and final accent color. The rim is then glazed with a clear glaze for food safety and comfort reasons. The piece is finalized with a glaze firing to cone 04. 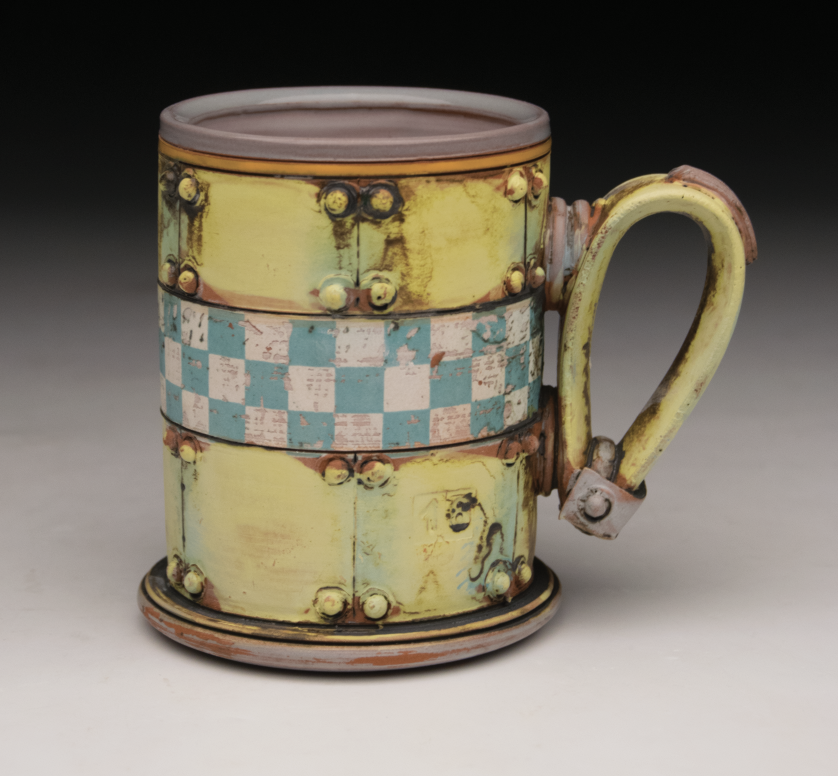 Mike Cinelli received his BFA from the University of Mississippi in ceramics in 2014. He currently resides in Taylor, Mississippi, where he is attempting to juggle his studio practice, being a father and a husband, and maintaining a rigorous schedule of complaining on the Internet. Follow him on Instagram @mike_cinelli.