Gökden Alpman Matthews was inspired to create mosaics by the myriad cultures in her homeland of Turkey. Unlike most mosaics, however, Gökden's work is not made up of small shards that are assembled to form a composition. Instead she creates the image without breaking the whole to symbolize the people of Turkey living on the same soil with different cultural backgrounds.

PS. To learn more about Gökden and her work, see the March 2022 issue of Ceramics Monthly.

The cultural and historical richness of the land where I was born and spent my childhood has always intrigued me. It fascinates me that the Roman, Byzantine, and Ottoman cultures continue to live so close together despite their differences; they are like plants with the same roots in the same soil, but with different colors. Turkey is a very rich mosaic, where different hues and materials combine into a single composition. My family is also a cultural mosaic, just like the peoples of the land where I originate. The journey I took, exploring these feelings, thoughts, and experiences, led me to the cultural mosaic.

For the ceramic mosaic technique, start by rolling out the clay to a thickness of 1 cm. Then, place the template that was prepared on the clay, and cut out the shape you want to make (1). Next, transfer the mosaic and its outlines that have been determined onto the clay (2, 3). 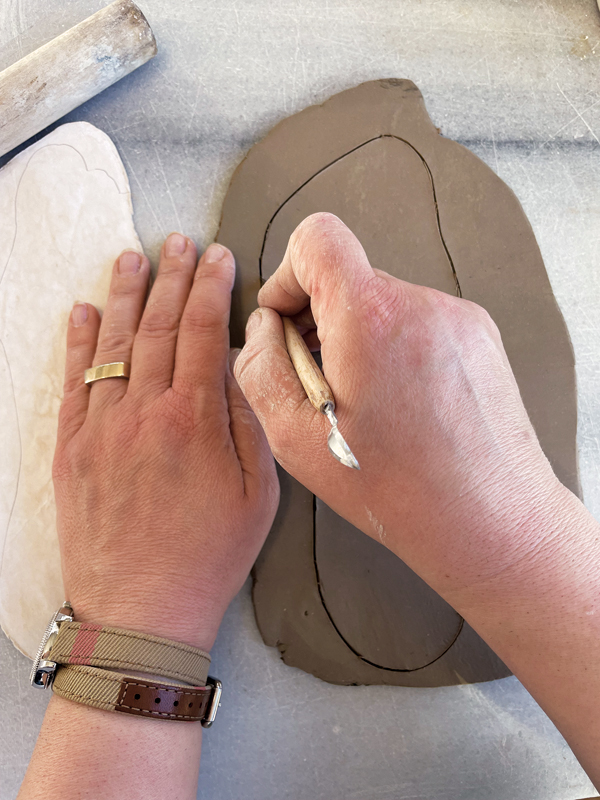 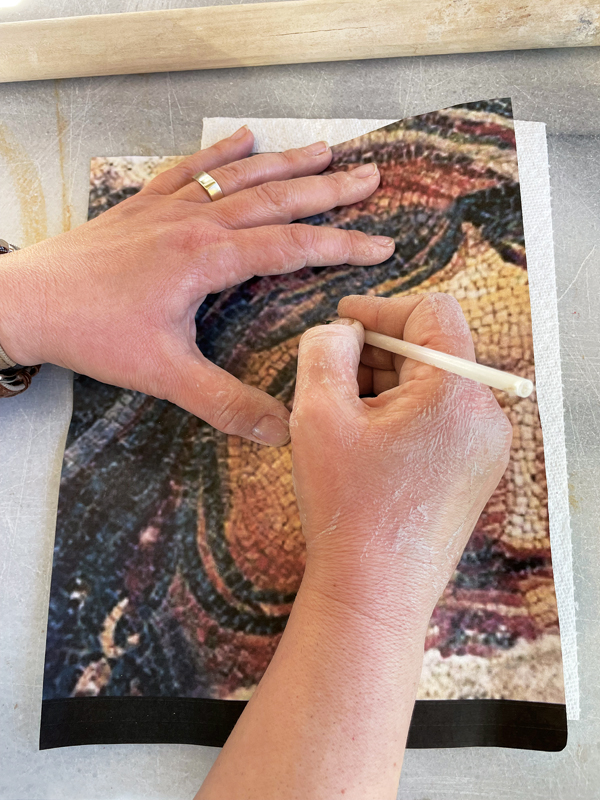 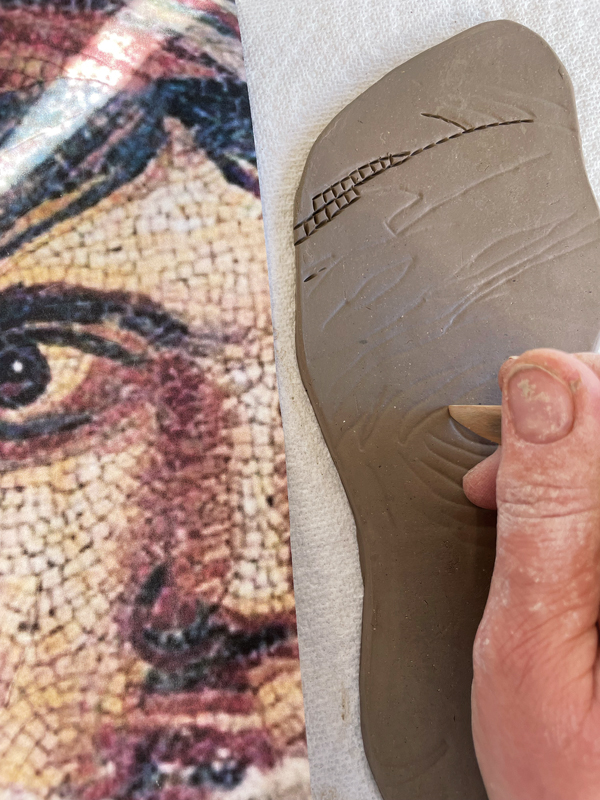 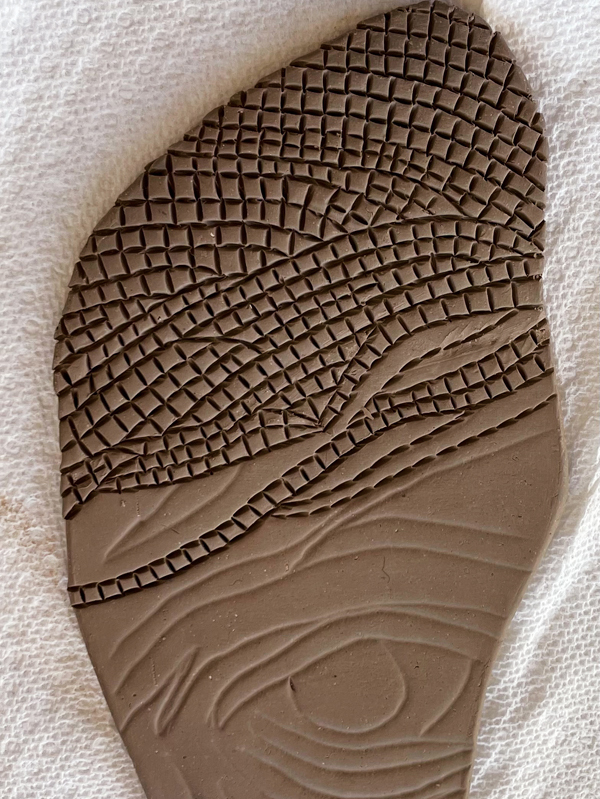 I cut grooves into the clay to create small square and triangular areas with my wooden tool, the tip of which I flattened to a 3-mm straight edge (4). I use the same process for creating a row on the edges of the slab, adjacent to the surface (5). Thus, I capture the image of the stones used in mosaic making (6). And, I emphasize that the unity on the surface continues around the sides down to the bottom of the slab. 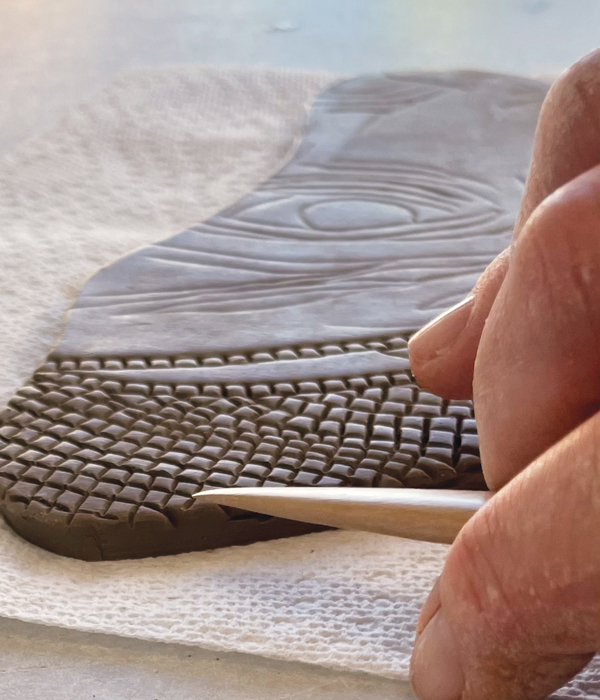 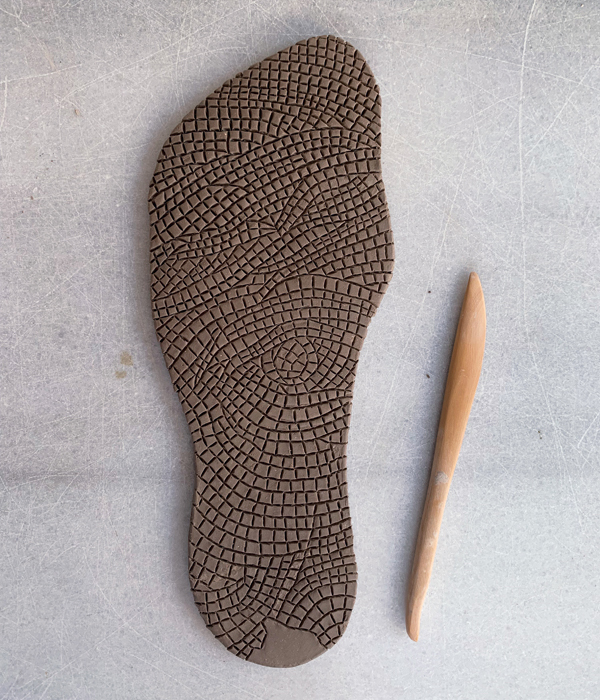 After bisque firing to 1742°F (950°C) (cone 06), dilute a wash made with chromium oxide, brush it between the grooves (7), and wipe it away using a damp sponge (8). That way, the stain remains only in recessed areas. This gives a clear visual sense of separation between the small pieces, and accentuates the patterning of the groove lines. After that, I paint each small piece with a white opaque glaze (9). I also glaze the small parts on the sides of the slab (10).
I add color with ceramic stains and oxides (11). And finally, I fire the piece to 1832°F (1000°C). 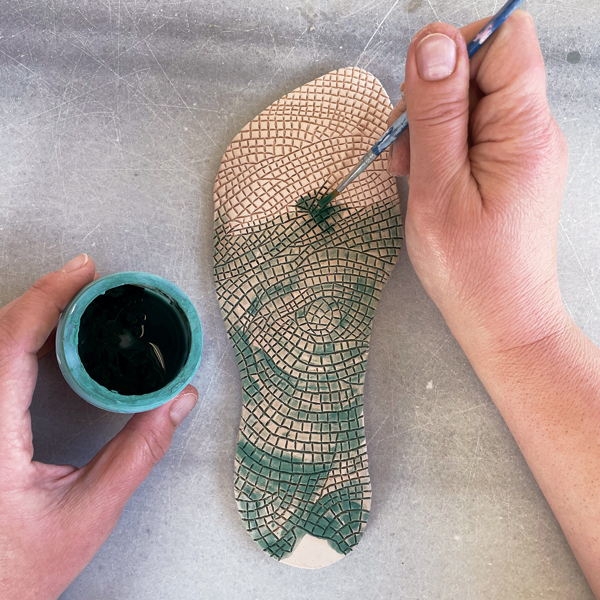 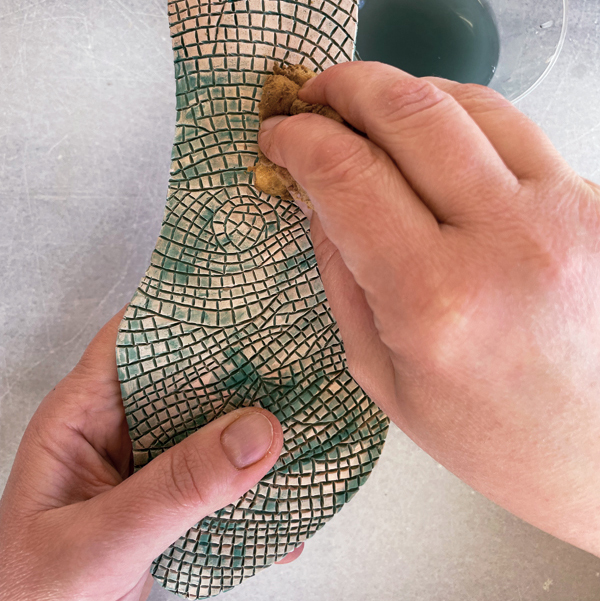 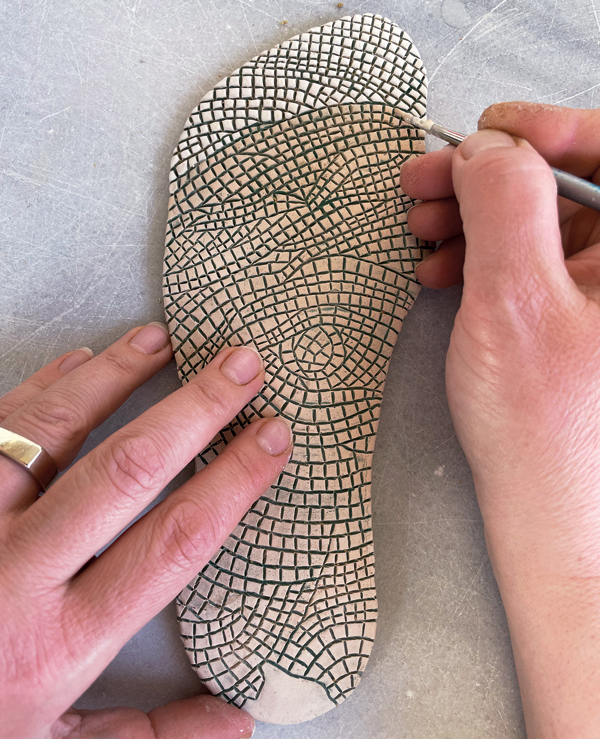 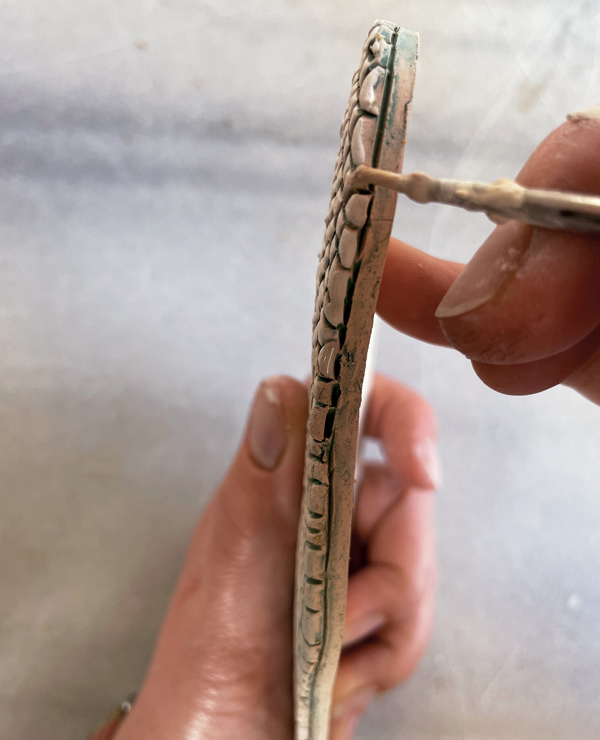 The firing temperature of in-glazed decorations can vary between 1742°F (950°C) and 2516°F (1380°C), depending on the body and the glaze condition. It can be applied to any clay body. The important thing here is not the clay body used, but the glazes  used. For example, when red clay is coated with transparent glaze, the decoration applied to it will not be seen clearly after firing due to the color of the underlying clay. For this reason, red clay should either be primed when wet using a light slip color or a covering glaze should be used. To achieve crisp definition to the motifs when using in-glaze decorations, the clay body does not always need to be glazed with covering opaque glazes. Sometimes applications can be made using transparent or artistic glazes. Note: Do not use fluid glazes because when applying in-glaze decoration on flowing glazes, patterns can distort completely during firing due to the movement of the glaze. 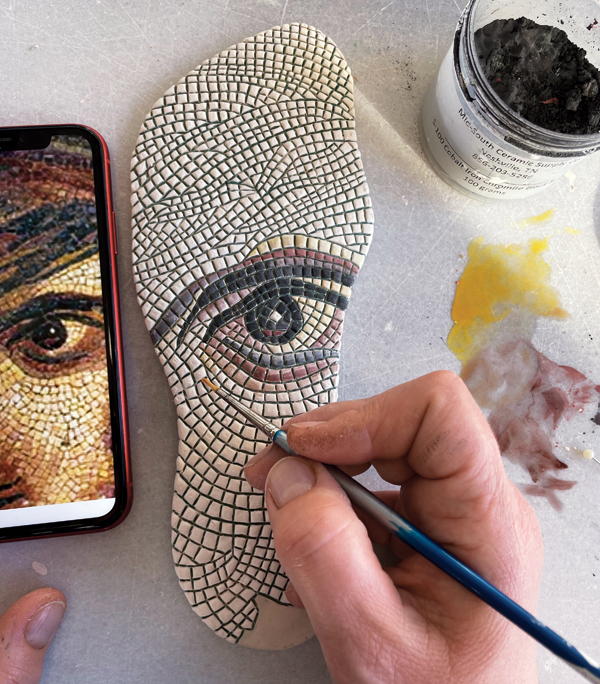 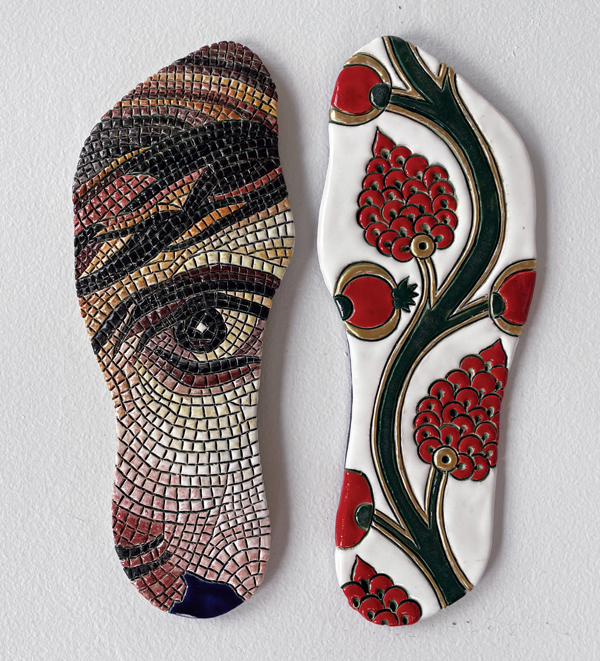 The durability of in-glaze colorants used for glaze decoration depends on the composition of the colorant or stain itself, the firing temperature of the glaze, and the kiln atmosphere. For example, since the glazes used in porcelain decorations will be fired at a high temperature (2282–2516°F (1250–1380°C)) to vitrify the clay body, use colorants like cobalt blues, chrome greens, and iron browns. Colors such as selenium oxide red and pink cannot be used because they burn out at high temperatures. These types of colorants can be fired to temperatures of 1652–1742°F (900–950°C).

When creating in-glaze decoration, almost all techniques (brushing, sponging, stamping, airbrushing, stenciling, carving, and sgraffito) used in surface decoration methods can be used. Apart from these techniques, sieve or screenprinting (direct printing) methods can also be used on flat surfaces.

The most important and special examples of the in-glaze decoration technique known in history are majolica. I find it useful to explore historical and contemporary majolica techniques.

What we experience, see, hear, and read shapes us. Our perceptions, interests, and abilities also make us who we are. During these last two pandemic years, I turned to the character Medusa. My view of Medusa has changed since I read the works of the 1st-century Roman writer Ovid. I can understand how the anger on the outside is compounded by the broken heart on the inside. I am preparing for my next exhibition with the excitement of my new work that will emerge when my drawings on paper are combined with ceramics and fire.

the author Gökden Alpman Matthews received her undergraduate and graduate degrees in ceramics from Faculty of Fine Arts Ceramics Department at Anatolia University in Eskişehir, Turkey. She has worked at numerous ceramics factories as a designer and as an independent artist. Her works have been shown in numerous exhibitions in Turkey and internationally. Learn more on Instagram @gokdenalpmanmatthews_art.