Sometimes the glazes we use are good for one purpose, but not so good for another. A glaze might perform well when dipping or pouring, but dry so quickly when brushed that it's nearly impossible to get an even coat. Ceramic glaze additives are the secret ingredients that can help remedy these problems.

CMC gum is a ceramic glaze additive that can be used to help improve brushability in glazes that are mixed for dipping. Not only can CMC gum help improve brushability, but it can also help potters get better results when stamping glazes. In today’s post, an excerpt from her video Mix & Match: Surface Techniques (a follow up to Mix & Match: Forming Techniques), Brenda Quinn explains how to add CMC powder to glazes to get great stamped surface effects. We also included a Pottery Making Illustrated archive post in which our own Jessica Knapp puts some other ceramic glaze additives to the test. –Jennifer Poellot Harnetty, editor

This clip was excerpted from Mix & Match: Surface Techniques with Brenda Quinn, which is available in the Ceramic Arts Network Shop.

Using Additives Such as CMC Gum to Beef up your Glazes

Glaze additives are the secret ingredients that make average glazes great. Sometimes the glazes we use are fine for one application method, but disappointing for others. A glaze might perform well when dipping or pouring, but dry so quickly when brushing that your brush sticks to the pot. Commercial glazes might have the opposite problem, brushing easily, but having a consistency that’s too thick for pouring or dipping applications.

There are several glaze additives that help solve these various shortcomings, by conditioning your glazes for brushing, dipping, or pouring. They fall into the categories of suspenders and binders. According to Dave Pier (a ceramic artist who is well versed on glaze additives and has even developed one), most glaze additives do a little of both, fixing suspension problems while also enhancing the bond between bisque ware and the raw glaze.

Some, like CMC Gum, Magma, and Spectrum Brushing Media, are organic, while others, like Spectrum Suspender, bentonite, Veegum-T, and Bentone MA/Macaloid, are clay-like materials. Spectrum’s Glaze Thinner is a sodium hexamethaphosphate solution, and Apt-II Ceramic Enhancer is an acrylic emulsion additive. The organic materials and products are great binders, and also help with suspension. They need to be used in small glaze batches, or if added to larger ones, a preservative needs to be added as well to prevent them from rotting. The materials listed are best at keeping a glaze in suspension, but also help somewhat in binding. 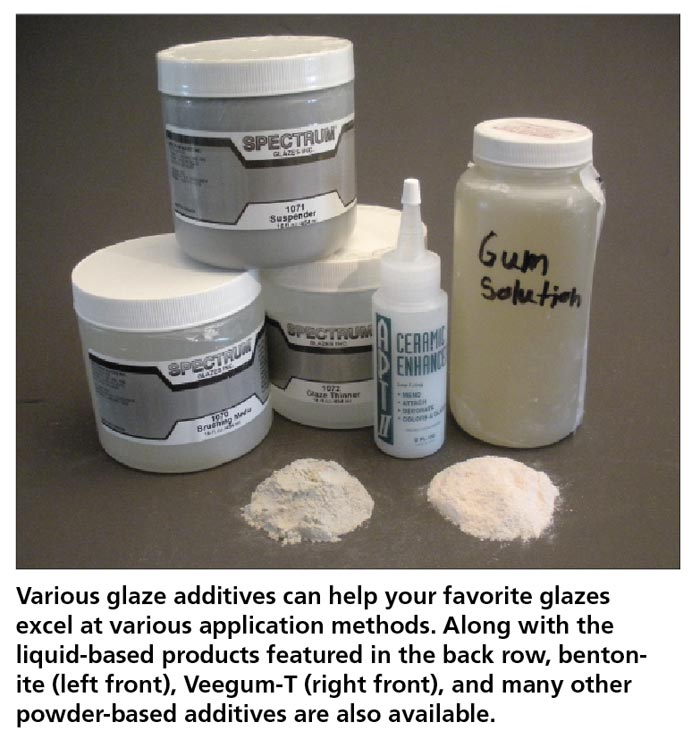 To test various additives, I used a transparent clear base glaze to which I added different Mason stains as colorants to differentiate each one. For the manufactured liquid products, I followed the instructions on the label for how much to add to a specific volume of already mixed glaze. For the dry materials, I used 20 grams of suspender/binder added to 100 ml (100 grams) of water. I allowed the dry material to absorb the water overnight, then mixed it thoroughly. I added it to the glaze at a volumetric ratio of 1 part binder to 8 parts glaze. Some suspenders are more potent than others, so as a general rule use between 0.5% and 2% by weight (of the dry ingredients). Testing is key for figuring out the ratios that work best. For really small quantities of glaze, add the suspender by the drop until it has the desired consistency.

Bentonite and Veegum-T are not as beneficial for brushing applications as they don’t really change the rate at which the glaze dries. The brush still tended to stick and drag across the surface. CMC Gum, Apt-II, Spectrum Brushing Media, and Magma all improved the glaze’s brushability. They slow the drying time, allowing for more movement of the glaze before it soaks into the bisque-fired pot, and reduce the surface tension of the glaze so that it’s more willing to flow rather than just stick to itself. Once the first coat of glaze was dry, a second coat could be brushed on without disturbing the first coat.

Tip: If you don’t have any of these materials on hand, a few drops of liquid dish soap added to a glaze can improve brushability by reducing the glaze’s surface tension. It won’t affect the durability of the dry glaze surface though. When brushing colored glazes over a raw base glaze, I found that CMC Gum, Apt-II, Spectrum Brushing Media, and Spectrum Glaze Thinner helped, as they dried more slowly and flowed smoothly.

Bentonite and Veegum-T work well for dipping and pouring, as do Spectrum’s Glaze Thinner and Suspension Agent. The glazes required less stirring before use, and adhered well to the test tiles. For the glazes tested, CMC Gum, Apt-II, Spectrum Brushing Media, and Magma allowed for thicker glaze coatings when dipping. Glazes with Magma added to them can be built up into very thick coatings without chipping. All of these products are also suited for techniques that call for carving away glaze. Since they improve binding qualities of the raw glaze, the glaze coating is harder, and therefore the carved lines can be very precise.

Magma, CMC gum, and Spectrum Brushing Media helped when attempting to re-glaze an already glaze-fired piece. They worked even at room temperature; however, as they take a little while to dry, the process took longer and the coats tended to be thin. Glaze material did build up on the surface though, and so when pieces were pre-heated, the re-glazing process went faster and was an improvement over results without additives. Apt-II was the only product that enabled a thick layer of glaze to be applied in one coat to the surface of an already glaze-fired piece without pre-heating the piece. It’s an acrylic-based medium and so has different properties than the other three products tried, which are organic gums.

If you apply your glazes in a variety of ways, the best thing to do is to have a large container of your base glaze and pour some into smaller containers then mix in the appropriate additive for this smaller amount. If the larger glaze batch doesn’t behave well, you can then add a suspender/binder (and preservative if using an organic binder) to the mix.

We would like to thank Apt-II (www.apt2products.com), Brackers Good Earth Clays, supplier of Magma (www.brackers.com), and Spectrum Glazes (www.spectrumglazes.com), for supplying products for testing.