Time to Warm Up! 5 Red and Orange Glaze Recipes Brighten up your glaze palette! Linda Bloomfield

With the warming summer temperatures, I thought I would share some red and orange glaze recipes to brighten up your glaze palette.

Today, in an excerpt from her book Colour in Glazes Linda Bloomfield shares some glaze recipes for lovely red and orange hues.- Jennifer Poellot Harnetty, editor

Producing a good red or orange glaze is no longer difficult, in fact it’s quite easy and a wonderful range from deep reds to pinks and corals through bright orange to pale peaches can be achieved.

During the late 19th century and early 20th century, radioactive oxides were used to make bright colored glazes. For obvious safety reasons, these oxides are no longer readily available, and are not considered safe.

Stains for coloring clay and glaze are now made by a few specialist companies (Mason, Cerdec), which do not widely publish their methods, although they reveal the materials and systems used to make the stains. For example, cadmium-selenium stains were developed to provide reliable reds, oranges, and yellows. Cadmium sulfide with the addition of increasing amounts of cadmium selenide gives oranges and reds. A cadmium-selenium red orange stain can be fired to high temperatures when the stain is incorporated in a zirconium-silicate-crystal matrix; however deep red is only possible at earthenware temperatures. 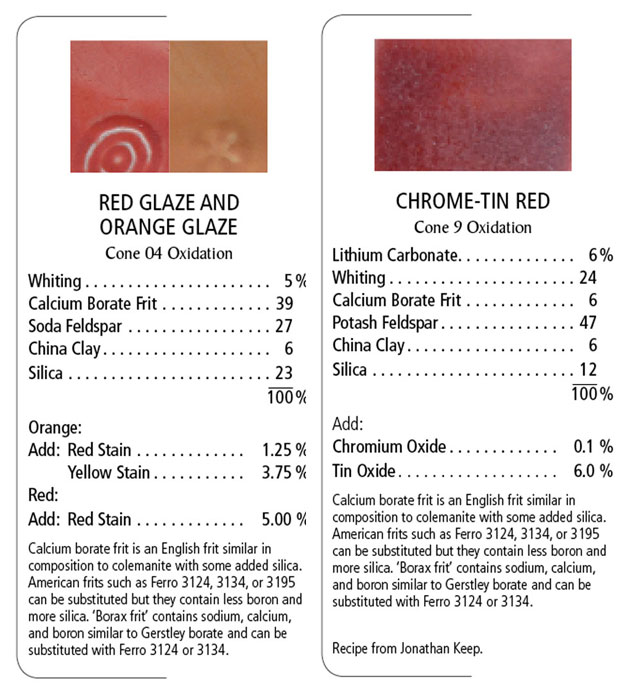 Copper red can only be obtained in reduction, and the color depends on glaze thickness, kiln atmosphere and position in the kiln. The best reds occur in runny, alkaline glazes containing less than 1% copper carbonate and 5% tin oxide. The oxblood red color is often streaked and mottled, and is caused by colloidal particles of copper metal suspended in the glaze. Local reduction of the glaze is possible in an electric kiln if very finely ground silicon carbide is added to the glaze. The silicon carbide reduces the glaze but not the clay body.

Orange is often obtained in wood, salt, and soda firings by using a flashing slip containing clay and nepheline syenite. Thinly applied shino glazes (thick white glazes made from feldspar and clay) are often orange-red when wood-fired. The iron in the clay reacts with the sodium in the glaze or kiln atmosphere, and turns orange-red if it is reduced and then re-oxidized on cooling. 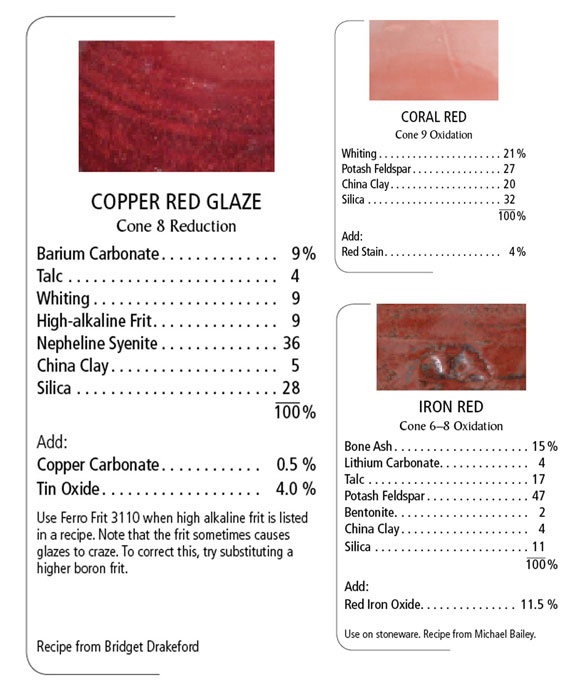