Raised in Clay: A Potter's Daughter Muses on Growing Up in a Pottery Family Hannah Marshall 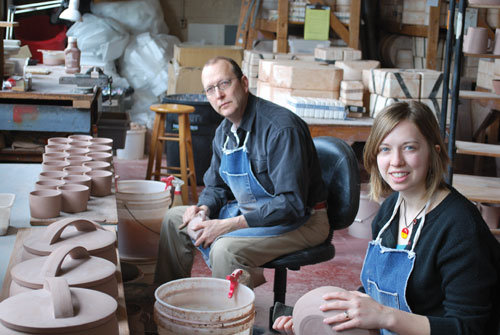 Since it is Thanksgiving tomorrow, and many families will be coming together to reconnect, share a meal, and tell stories about holidays past, today I thought I would share this lovely article from Hannah Marshall, which was originally published in Ceramics Monthly.

The daughter of potter Paul Eshelman, Hannah reminisces on growing up in clay. The Eshelman pottery was truly a family affair with all members contributing in some part of the production schedule. Though it may sound like the ideal lifestyle to many of us who discovered pottery later in life, Hannah explains that it took a lot of blood, sweat and tears, but I don't think she would have had it any other way. - Jennifer Poellot Harnetty, editor

In the fall of 1990, Dad, Mom, and my oldest brother Eliot lugged cardboard lettuce boxes full of equipment, a kiln, dry clay materialsâ€”feldspar, pyrophyllite, Red Artâ€”boards, carts, and plaster molds across town from an old Molo Oil station to a drab but hopeful building on the small stretch of Highway 20 that ran through the farming community of Elizabeth, Illinois. When my family first moved my father's business to the studio, I was three, and Alec was five, so we watched our lives resettle in the new space. Two-thirty-eight North Main consisted of three rooms: two rooms with plaster walls, measuring about one by two Ford pickups, and one open space about four times as large with cement walls and floor, large windows, and pipes running crisscrossed like three-dimensional highways. Once an auto shop, then a newspaper printer, it would now house my dad's slip-cast creations, the livelihood of our family. The studio is always frigid in winter and sweltering in summer. NPR buzzes on the radio, the glaze smells like rotten Chinese take-out, and a bucket of clay water wafts the smell of mold through the air. This place wakes me up.

The pots my dad makes are so unlike the shifting brown world from which they emerge. The clean, geometric shapes of his work are architectural, influenced by Shaker design, Yixing teapots, and Russell Wright. His place settings are multi-functional, fitting together like pieces of a puzzle: salad plates fit against dinner plates, serving bowls nest closely and beautifully for efficient storage.

I am connected to my father's workâ€”his daughter, part of his DNA and his thought process, a member of the workshop and the family. Though friends and cousins and apprentices came and went, my five family members together worked the slip and dried potsâ€”it never felt individual, like the work was our father's only. My dad could of course do anything in the studio, but most of his time was spent glazing pots, a job he didn't entrust to any of us. My mom usually sat in the side room we used as an office, her creative-scientific brain shuffling through W2 forms, phone numbers, and craft fair applications. My oldest brother Eliot was the â€œcast-master,â€ lifting 40 lb. molds, trimming the edges of wet pots. Alec, the middle child, brought fresh molds of my father's forms from the cluttered and dank basement to dry in the sunlight, the plaster glaring like new snow. The place and the processes feel organic and cyclical, though the slip machine grumbles noisily so that Neal Conan on Talk of the Nation has to raise his voice five notches to be heard.

As for me, I can fettle bone-dry clay as well as any potter, holding the knife's round, wooden handle and scraping the blade fastidiously around thin, sharp rims. A board of square cups takes 45 minutes to work over; a board of teapots might take an hour and a half. Because I grew up with work in the studio, I didn't wonder what it was like to be in a factory or on a cotton plantationâ€”it seemed we had to push just as hard and work just as long. Lunch break is half an hour, unpaid. I mopped the floors and cleaned the bathroom to break up the work of scraping pots.

My dad makes buckets of slip from recycled and newly-mixed clay to pour into plaster molds that suck the moisture from the slip and form his clean-lined pots. The pots dry and are finished and fired, or they break and are recycled, and we rework the clay again and again until it is perfected. I watch this process of birth and death, destruction and rebirth: it is my life simplified.

A few months ago, I asked my dad what he enjoyed about this work. He said, â€œI like designing the pots; I like careful craftsmanship. And the hard work is how the craft is possible.â€

Craft is not romantic; creation is not mysterious. I could breathe eloquent words into the pottery studio and make you believe it was a dusty Garden of Eden, but it really is made of stone, brick, clay, sweat. It is reality. It reminds me of every day I liveâ€”wake up, take a run, eat breakfast, work or go to class. Creating beautiful pottery through a process of work is like creating a life where each physical day makes up profound and meaningful years.

We're all in this mess togetherâ€”it's family, it's personal. The work hurts because it is hard and tied to our happiness. But it doesn't seem so bad when we are all sweating there together.

When my dad fires a kiln, the air in the studio is different. If it is winter, we take breaks from dipping our sponges into icy water and smoothing the greenware to huddle around the kilns in a partitioned corner of the studio. The heat is dry, like the heat radiated off sand in Arizona. We bask for two minutes and thirty seconds, holding our hands close to the blazing body of the kiln. In summer the kiln seems angrier. Although we close the doors of the kiln room, the heat still permeates into the studio, and in mid-July we turn the air conditioner on, hoping we make enough money to get ahead of the electric bill. The water that, in winter, freezes the joints in our fingers feels tepid on summer days when a kiln is fired.

We churn out pots free from crawling glaze and pock-marks and warped lids. My dad has taught me to listen for the sound of a pot cracking, to check for perfectly circular rims and consistent thickness. 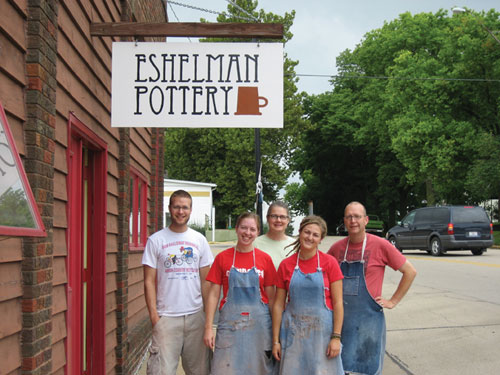 One night, when my mother was out of town, my dad worked into the small, dark hours, so my brothers and I slept on the floor of the gallery. I stared at the white ceiling before falling asleep, and as I think of that night, the ceiling looks painted like a cathedral ceiling, with images of our hands, of denim aprons and plaster molds, of glowing kilns. The work is deep in us; my family is the clay. We will be worked and reworked until we can finally find the shape for which we were intended. We grew in work, and that's what made each other real and important.

Years later, I watch snow fall annoyingly over suburbs of the Twin Cities. It is the first week of April. My mother is on the phone; she says, â€œDad is over firing a kiln tonight. He won't be home until late.â€ Tomorrow, they will work at least nine hours, just the two of them to fill the space. I think about how, soon, the long summer will swelter through the studio while I sit at a computer desk in an air-conditioned office.

It will be the first summer I have not worked at the studio in eight years. Three-hour shifts became 40-hour weeks, and now my dad must look for someone to replace his daughter's seasoned hands.

I am afraid that the threads of our family were too closely woven around the work of the studio. We have moved away now, Eliot to Boston, Alec to Michigan, and me to St. Paul. Still, if I imagine all five of us coming together again, I see a long day of summer work in the studio, creating the pottery that breathed life and strength into our family. The work shaped us, and even now each of us sees life through the light of those years.