Quartz Inversion and Other Important Stages of Firing Pottery What Happens when Firing Clay: From Quartz Inversion to Cooling Cracks Richard Zakin and Frederick Bartolovic Clay undergoes a remarkable transformation when fired in a kiln, changing in molecular structure as the kiln heats up and cools down. Perhaps one of the most important stages is quartz inversion, which affects ware in the bisque and the glaze firings as the kiln temperature rises and cools back down. Obviously, these changes can be hard on ware so there are guidelines to avoiding problems that you can follow when firing clay.

Important Stages of the Firing

There are several important temperature ranges to be aware of during the firing. During the firing process the molecular structure of the clay is changing as the kiln heats up and then cools back down. These changes can cause great stress on the physical structure of the ware in the kiln and progressing through these stages too quickly can cause drastic results. Here are some guidelines.

Use your electric kiln to its highest potential!

Now is a great time to pick up your copy of the 4th edition of the classic book Electric Kiln Ceramics, which has been completely rewritten, reorganized, and expanded by Frederick Bartolovic. Loaded with new color images that highlight some of the most beautiful results possible with electric firing, the new edition features step-by-step instruction on forming and finishing pieces for electric firing, schedules for firing both manual and computerized kilns, and even glazing techniques and recipes to try out in your electric kiln.

Cristobalite is a form of crystalized silica which occurs naturally in some clays (particularly high iron non-vitreous stoneware bodies) when fired above cone 3. At 428°F/ 220°C during cooling these crystals rapidly contract and shrink 3%, potentially causing dunting or cooling cracks. Though the ware inside the kiln may not be composed entirely of cristobalite crystals, this is point where the ware (if cristobalite is present) undergoes a great amount of stress and needs to be cooled slowly. 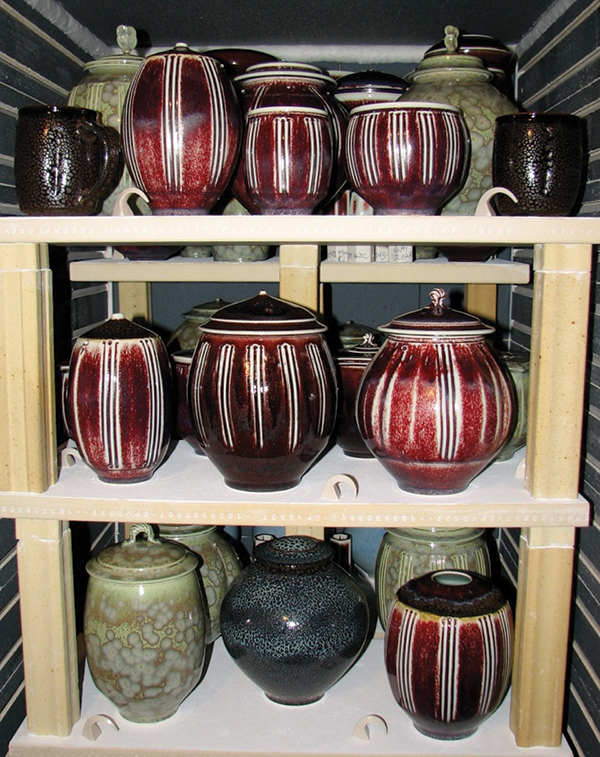 Cracks may be caused by an overly rapid firing cycle (especially during the early stages of the fire) or by rapid cooling. To deal with cracks that occur during heating, the kiln should be heated more slowly. To deal with cracks that occur during cooling, the cooling cycle needs to be slowed down. It can be difficult to tell whether cracks were formed during heating or cooling cycles. If possible look at the glaze around a crack. A cooling crack will usually be sharp like broken glass whereas a crack formed during heating will show signs of the glaze healing over and even possibly running or dripping into the crack.