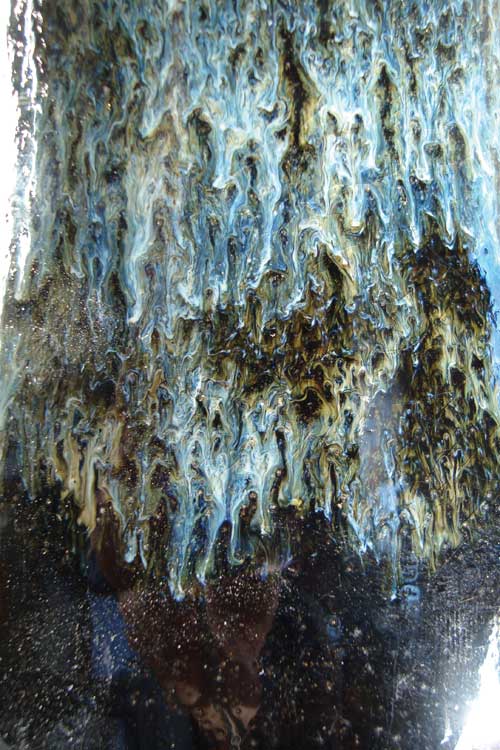 Oil spot and hare's fur glazes are beautiful and fascinating. In a nutshell, they are high-iron glazes that are applied in thick layers, which bubble up through one another and generate patterns ranging from metallic crystals to running streaks. These effects resemble, you guessed it, oil spots or the striated patterns in the fur of a rabbit. Of course, the explanation for how and why this happens is far more complex than that, so it's a good thing John Britt did his homework and explains it so well in this post! –Jennifer Poellot Harnetty, editor

The term Tenmoku is thought to derive from the Chinese characters for Mt. Tianmu (Mountain Eye of Heaven). Japanese monks regularly traveled to China during the Song Dynasty to study Buddhism where they first encountered some of these black glazed tea bowls. By the 13th century, Chinese Jian oil spot tea bowls became highly prized and large quantities were imported to Japan for use in the tea ceremony. White tea was dried, ground to a fine powder and whipped in a bowl to produce a frothy white drink (matcha tea) that the monks thought looked better in the black glazed tea bowls.

Today, most potters are familiar with tenmoku glaze in a reduction firing. But to get oil spot effects, stiff tenmokus need to be fired in oxidation. This relies on a very simple chemical principle that, once understood, can lead to many successful firings. Red iron oxide (Fe2O3) acts as a refractory in oxidation but it can easily be changed to a flux in the form of black iron oxide (FeO), in reduction. Most potters are familiar with this property but for oil spots, we are interested in iron's ability to self-reduce. At approximately cone 7 (2250°F or 1232°C), ferric iron (Fe2O3) cannot maintain its trigonal crystalline structure and rearranges to a cubic structure, magnetite (Fe3O4), which further reduces to become ferrous (FeO). This is called thermal reduction, and what this means in layman's terms is that, when it is sufficiently heated, the red iron oxide used in the glaze recipe will naturally let go of an oxygen atom. As the liberated oxygen bubbles rise to the surface of the glaze, they drag a bit of the magnetite with them and deposit it on the surface. A rough black spot is left on the glaze surface that is a different color than the surrounding glaze, due to the larger concentration of iron oxide in that small area and its subsequent re-oxidization during cooling. 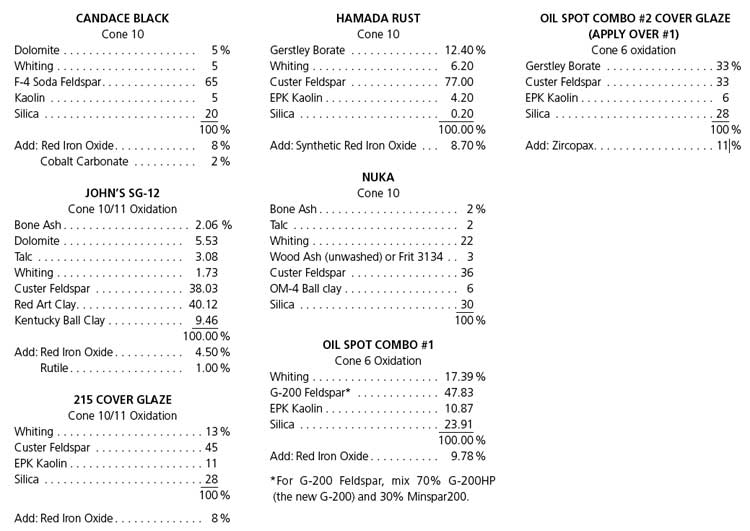 If glazes are your thing, you will love the Glaze Feature in every issue of Ceramics Monthly. Learn more here... 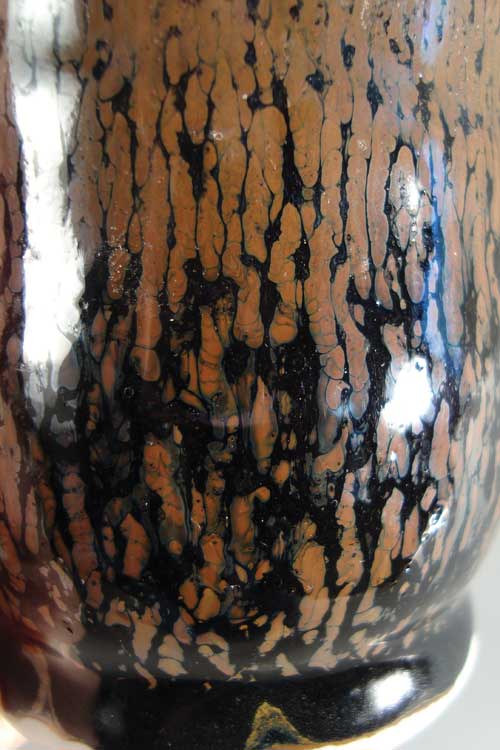 To achieve the oil spot effect you must first apply the glaze very thick (¼3?8 of an inch) and then fire it in oxidation to cone 10 or higher (though it can be done at cone 6, which we'll get to later). The glaze will bubble vigorously as the iron thermally reduces. A soaking period is helpful at the end of the firing to allow the bubbles to smooth over. This can be done in multiple ways, each resulting in subtle changes to the final look of the glaze. For example, some firing cycles slow the final climb from 2250° F to 2350° F to 50 degrees per hour or less, while others hold the temperature at 2350° F for an hour or so, until draw tiles reveal the maturation of the glaze. Still others fire to cone 12 or 13. There are several glaze types used to achieve oil spots. Most are stiff feldspathic bases with 5-8% red iron oxide. This will produce brown on brown oil spotting. Adding cobalt carbonate at approximately 2-5% produces a glazed surface with silver spots floating in a black field (see fig1). 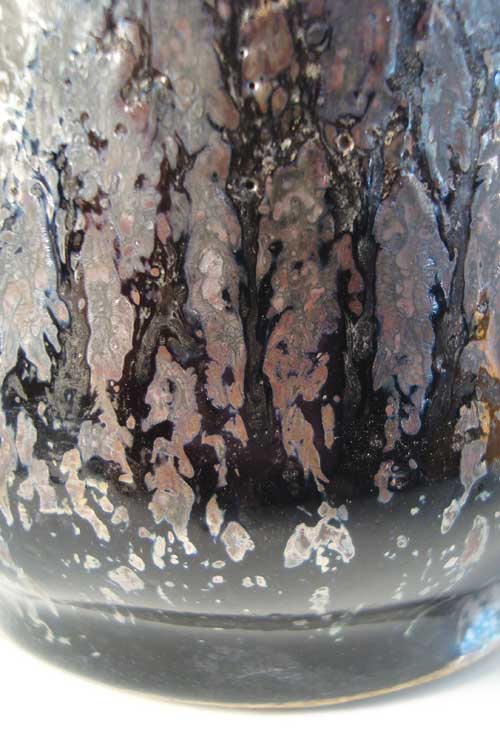 Another popular option involves a multi-layered glaze approach. Oil spots can be achieved using an iron slip under a tenmoku glaze. This should be more accurately described as an iron slip glaze under a temmoku glaze. John's SG-12, which is called a "slip glaze"because it contains a high quantity of slip clay, (like Albany, Alberta, Redart, shale, etc.) is applied first. A cover glaze is then applied over it. In this case, the 215 Cover Glaze is used. The John's SG-12 is still applied thickly (three coats) and then the cover glaze is applied in one or two coats. Hare's Fur is named because it is said to resemble the fur of a hare. It is a specific type of oil spot glaze that is black with delicate brown streaks. Another form has silvery streaks floating in a black/brown base (also called Yuteki). An even more difficult form to achieve has iridescent streaks, which is why it is highly prized and commands a high price. (Also called Yohen, which means color-changeable. One way to achieve Hare's Fur is to fire the glazes very hot and have a long soak to allow the glaze to run down the side of the pot, causing the oil spots to run and melt together on the side of the pot, but an easier way is to use a more fluid cover glaze, like Hamada Rust, over the slip based glaze (John's SG-12). This causes the oil spots to run down the pot forming delicate streaks rather than stiffly holding the oil spotting. This running and streaking can be varied by using different cover coat glazes. You can use a kaki cover glaze to achieve more orange colors, or an iron saturate to give more iron spangles. 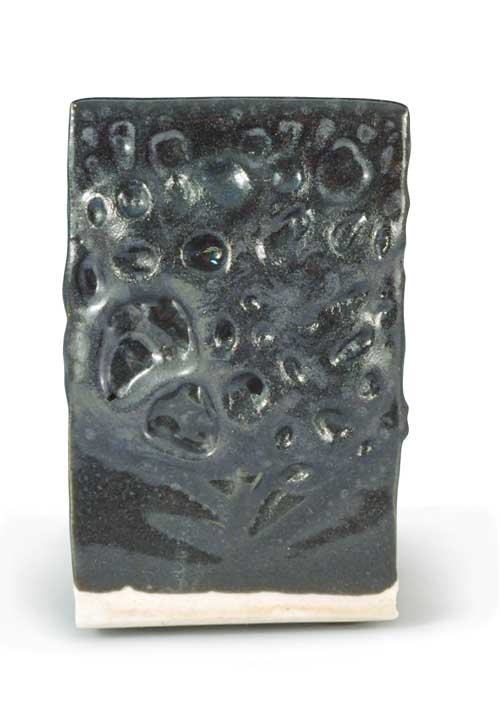 There is some confusion in describing Hare's Fur because some potters refer to all streaky, milky, runny glazes as hare's fur (e.g., Blue Hare's Fur). Technically this is incorrect. Streaky, milky, runny glazes could be caused by rutile or a Nuka glaze over another glaze, creating an effect similar to oxidation oil spot streaking. One example is a Nuka Glaze over Hamada Rust. Oil spots can also be achieved at cone 6 but since the process starts somewhere around (2250° F) the spots may be small. To improve the look you can soak the kiln beginning at cone 6, until cone 7 drops.

A frequent contributor to Ceramics Monthly, John Britt is the author of The Complete Guide to High Fire Glazes: Glazing and Firing at Cone 10. For further information, see www.johnbrittpottery.com Want more information about oxides? Learn about rare earth oxides.