It Slices, It Dices! Some Simple Glaze Tests Reveal a Ceramic Glaze That Can Do it All (well, almost) Kristina Bogdanov 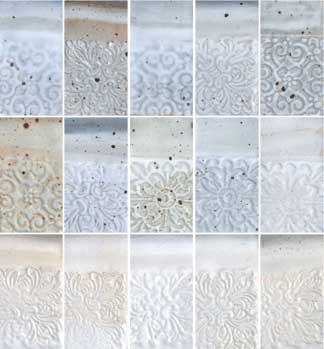 Imagine a ceramic glaze that fires perfectly at both cone 10 and cone 6, in reduction and oxidation, and in a soda firing, yet still produces a variety of exciting, stable colors. Kristina Bogdanov, who teaches ceramics at Ohio Wesleyan College in Delaware, Ohio, was intrigued by the possibilities when she realized that one of the class glazes seemed to fire well at cone 10 reduction in a gas kiln, cone 6 in an electric kiln, and cone 9 reduction in a soda kiln without any change in the recipe. So she ran the glaze through a battery of tests to see just how versatile it was. Today, which is now available as a free download, Kristina explains her testing process and the results. - Jennifer Poellot Harnetty, editor

The glaze that was tested in this project - Turner's White - consists of common inexpensive ingredients that are easy to find. Additionally, this glaze has very good properties: great viscosity but not runny; applies very well on bisque whether you spray, dip or pour; and doesn't settle out in the bucket over time so remixing is fairly easy.

Testing the Base Glaze

My students and I decided to take two directions with the glaze‚ - first exploring Turner's White by changing the ingredients within the recipe, and the second exploring color development. To explore the base, we made 500 gram test batches where we increased one ingredient by 100 grams and another test where we omitted the ingredient altogether. We did these two tests for each ingredient.

These tests did not require any glaze recalculation but gave the students a better understanding of what certain chemicals do in a glaze. For example, Turner's White's original recipe produces a nice matt white surface fired to cone 6 electric. Adding silica, Turner's White fluxed more, and at the same temperature gave a more glossy, white surface, but was still very stable. Adding Zircopax and firing to cone 6 electric resulted in a superb white semigloss surface, and omitting Zircopax, produced a nice, light beige. Adding dolomite or talc also made Turner's White flux when fired to cone 6 electric, but adding EPK yielded a more textured, rough surface, like a slip or engobe.

The second part of our project was to use Turner's White as a base, but just exclude the Zircopax (an opacifier). We added a variety of colorants: copper carbonate, cobalt carbonate, rutile, red iron oxide, Mason stains, and others that are not shown here. We fired the tests to cone 6 in both electric and gas reduction. The test results were both interesting and disappointing as they yielded colors that we expected or did not.

Copper carbonate gave light turquoise colors at 2% and at 4% it was dark green in electric firings. A combination of red iron oxide and rutile gave a buckwheat color when fired in electric. Adding 2% cobalt oxide and 4% manganese dioxide gave a nice purple both in oxidation and reduction. Nickel at 4% in oxidation gave a mustard colored matt surface but produced a chartreuse color and rough surface in reduction.

It is still a work in progress to find the "one glaze" for our studio. I wasn't keen on glaze testing until I stumbled upon Turner's White, which motivated me to explore the recipe. I encourage those of you who have one favorite glaze to try out one of the two directions and see what happens, maybe you'll discover some remarkable surface or color. In any case, you'll better understand the glaze.

Note: Tests 3, 4, and 6 were applied over the original Turner's White recipe above.

To learn more about Kristina Bogdanov or see images of her work, visit http://kristinabogdanov.com/ceramics.