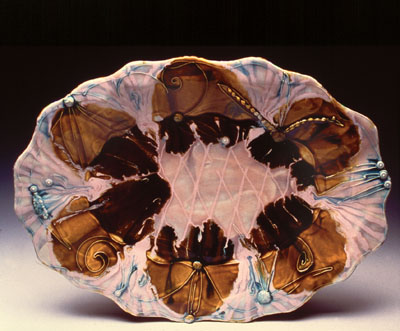 Greetings Ceramic Arts Daily readers! Well, I blinked and the next thing I knew it was time to shift my daytime focus from playing peek-a-boo and changing diapers to sending newsletters and updating web pages. Yes, my maternity leave has ended and I have taken back the Ceramic Arts Daily reins from Sherman Hall (thanks Sherman for doing my job these last ten weeks!). It was tough leaving my little one this morning, but the blow was softened by the fact that now I get to start thinking about clay again.

Today's feature is just the ticket to get me excited about being back at work. Ceramic artist Kari Radasch explains how she piles glazes with various melting points onto her handbuilt terra cotta pottery and lets gravity do its magic in the kiln. The results are luscious surfaces with luminous depth...just the ticket (I still miss my boy though)! - Jennifer Poellot Harnetty, editor

It is a shallow notion to insist that low-fire work lacks the glaze depth that stoneware and porcelains claim to have. On the contrary, it is as much the case that high-fire work lacks the glaze depth of terra cotta. There are many reasons for this misperception, but the most preeminent one, in my opinion, is that our low-fire vocabulary is not as developed as our high-fire one. We will begin to fix that right here.

Surface is more than a seductive veneer; at its best it engages the clay. My surfaces begin from the minute I touch the clay, with the rolling out of coils, the pounding out of slabs and the pinching of forms. I embrace spontaneous yet purposeful marks—brush trails, glaze drips and thinly applied slips. I try to embed as much information as possible in the making so that the glaze can respond accordingly. These marks have a huge impact on the finished glaze surface. They aid in building layers and provide a variety of terrain and textures to which the glazes respond. These marks are not only functional, but they tell a story. They recall motions and actions of the maker. This veneer adds another layer of surface and meaning. 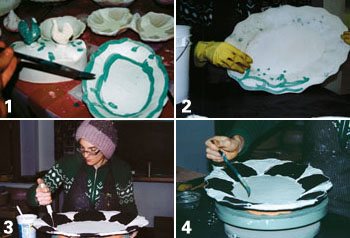 I work with a terra cotta to which I add 2–4% red iron oxide and burnt umber. I do this for two reasons: to encourage an active interface between the clay and glaze, and to make the clay rich and chocolaty. I use terra cotta clay because of its robust nature, its visual weight, the way it records a surface and the way it responds to my touch. I begin by making marks such as fingerprints, incisions, tracings, inscriptions and serrations from a rib. Next, I may emboss areas of the slab with architectural motifs reminiscent of decorative tile and tin ceiling panels. I then place a heavy white slip over the entire piece using a large mop brush, topping it off with a much thicker slip piped through a syringe. The final wet step is attaching candy like buttons made from a thickened version of the white slip.

One of my first important realizations was that I needed to use glazes with different melting points. Their differing viscosities gives them dimension and prevents them from looking too shiny or flat. After hundreds of glaze tests using several standard glazes (transparent gloss, satin white opaque and majolica), I began layering and floating glazes upon one another. I ended up choosing a majolica because of its thick, stiff marshmallowy-looking qualities, and two different transparent gloss glazes (one that is accepting of stains and another that is a barium-fritted glaze, reminiscent of those luscious lead glazes).

I also started paying close attention to gravity, watching how glazes move, melt and flow depending upon their mass, temperature and location on the pot. I have found two things that help my glazes flow better during application: I add both CMC Gum (0.6%) for brushability and Veegum T (1.6–1.8%, depending on how heavily the glaze is fritted) for suspension. I also have found that spraying each pot with a mist of water (aside from washing the bisque before glazing) not only lessens the pinholes but acts as a provisional vehicle that assists in achieving an even, flowing first glaze coat. I have no doubt that the most consistent method of firing is to use pyrometric cones. I have learned this through experience. Firing with cones ensures that your results will be as true as possible. However, some of my more important aesthetic decisions have been based on firing mistakes. One of these mistakes led to my decision to fire to a soft Cone 02. Raising my firing temperature is the final step in encouraging my glazes to move more than they would at Cone 04. The added benefits are a stronger clay and glaze interface, and a more vitreous clay body

TIP: When approaching a glaze cycle, I clean my studio, especially my worktable and banding wheel, then I lay a large plastic tablecloth down so that glaze cleanup is minimal. I give my pots a sponge bath as I unload them from the bisque kiln, ridding them of any dust that could later create problems in glazes. Any pots that are not going to be glazed within the day, I cover with plastic.

After using a pencil to divide and mark the areas for the different glazes, I brush the bisqueware with a copper carbonate wash over all of the slip-trailed and textured surfaces. (figure 1). I wipe the copper carbonate off, allowing it to be trapped in the piped slip and sprigged buttons. Since it is a strong flux, it increases the melt, encouraging the glazes to run and pool over these slip barriers (figure 2). Glazes that run the most are brushed on, then stiffer glazes are piped out of a syringe. For example, two transparent gloss glazes—tinted to have amber and pink tones—are brushed into the demarcated pencil areas. Then pink majolica is applied (using a syringe) on top (figure 3). Finally, for added insurance, I encourage specific areas of glaze to melt by adding copper carbonate wash on top of the glaze (figure 4). This combination of stiff and fluid glazes, along with gravity, provide the effects I desire.

CAUTION:Limited exposure to copper is considered relatively safe; however, copper carbonate is a heavy metal, so to be safe, I always wear latex gloves when wiping off the copper wash. 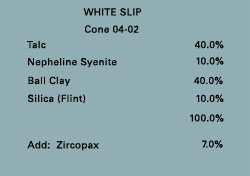 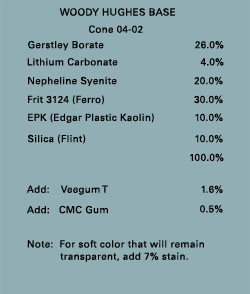 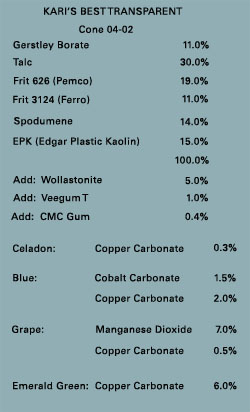 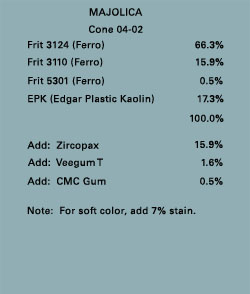 NOTE: CMC is an organic gum and will break down over time (not only will it stop working, but it has the potential to develop an odor). When left to dry, CMC creates a hard glaze coat, which is great if it is necessary to transport your wares, but when left in a brush, the gum will act like a glue—sticking the bristles together, making it tough to wash out.Kari Radasch received her M.F.A. from University of Nebraska-Lincoln. See her website: www.kariradasch.com