Marcia Selsor's Tips on Obvara Firing Enhance the effects of an obvara firing by texturing the surface! Marcia Selsor 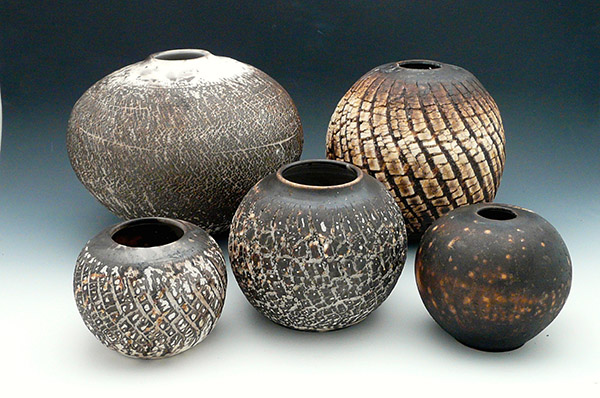 The obvara firing process, which originated in Eastern Europe around the 12th Century, involves scalding the finish on the pottery to seal the porous surface. Similar to the raku pottery process, a bisqued pot is heated, in this case to 1650°F (899°C) and removed from the heat. The difference is that the pot is then dipped into a specific obvara yeast mixture before being dunked in water to rapidly cool the piece. The effects are quite stunning.

In this post,  an excerpt from her video Raku Firing: Expanding the Potential of the Raku Kiln, Marcia Selsor shows how to enhance the effects of an obvara firing by texturing the surface and then shows the exciting process. - Jennifer Poellot Harnetty, editor 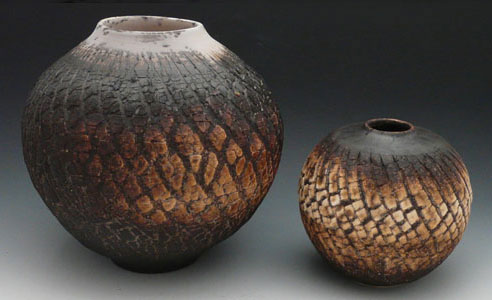 (From Marcia Selsor's website): It is mixed three days in advance of firing. Pieces are made and bisqued before the final firing. Using a raku kiln, fire a batch of pots to 1650 degrees F. Pieces are removed one at time, dunked into the brew and then quickly into water. Then they air cool. The brew burns quickly on the surface of the piece before going into the water. The water stops the burning and color change. The obvara firing technique is a technique originally used to seal low fire pottery. It is believed to have originated in Eastern Europe during the Middle Ages. There is a revival of the process underway in Ukraine and the Baltics. It is nicknamed "Baltic Raku." The solution which I call the "brew" is a mixture of flour, yeast, and water. If the kiln gets below 1500F before al the pots are processed, turn the kiln back on and take it back to 1650F. It the piece is too cool the obvara firing process doesn't work and makes a slimy mess.

To learn more about Marcia Selsor or to see more images of her work, please visit http://www.marciaselsorstudio.com/.