Chartreuse, pink, and purple are not colors you would typically associate with a wood firing, as these colors tend to get washed out in a high-fired wood kiln. For Richard James, the process of wood firing was central to his work, but he was often disappointed by the surfaces.

So he adapted the process to fit the low-fire earthenware aesthetic he preferred. Now he finds he can retain the spontaneity of traditional wood firing, but also open opportunities for color and a more detailed surface. In today's post, he shares his techniques. -Jennifer Poellot Harnetty, editor

A couple of years ago, I came to a decisive point with my work. The results of firing with wood were coming into direct conflict with the surfaces I wanted to achieve. I found excitement in the texture of the unfired clay, only to see those details covered by ash and the overall form softened. What I wanted was to get back a balance that I saw in a green pot—crisp and set, yet still somehow on the verge of malleability. At the same time, though, I was unwilling to give up something as central to my process and studio practice as wood firing.

I have found the use of earthenware to be a good answer, with the possibility to be a great one over time. This change in material and method retains some of the spontaneity of traditional wood firing while opening up the opportunity for color and a more detailed surface that I had been searching for. There is also the added benefit of saving time and resources, both of which are becoming more treasured as I get older. I see many possibilities in using this method, but only if some basic notions of wood firing aesthetics are allowed to go on holiday. There is no melted ash or dramatic flashing, no complete metamorphosis of the object, and, to the experienced wood-firer, an unfinished look. My technique is dictated by aesthetics, but is also searching for a place in a many-thousand-year-old tradition where aesthetics have been shaped by the firing method. 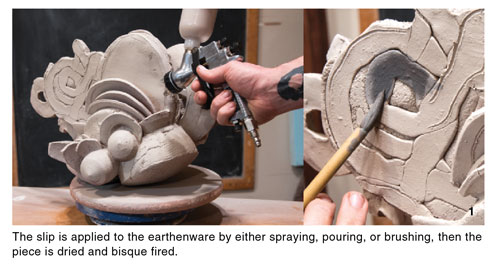 I use a wide array of slips and underglazes in combination with terra sigillatas—some are sprayed on and others are painted on thickly with a brush (1). The square patterns are laid out with graphite and a ruler (2), then painted with underglazes and terra sigillatas to resemble a heavily pixelated photo (3). These pieces evolved from a previous body of work that was investigating the visual and symbolic functions of headdresses. I still like to keep some aspect of an abstracted head woven into the form, in addition to the notion of the world as we see it being constructed inside our heads.

Also, almost all we know of the cosmos comes from spectrometry, which imparts information through color. Each square contains its own packet of information that is still to be unpacked. Visually, the squares help to balance out the bulbous and expanding movement of the piece. I treat some areas with a watered-down black underglaze and then wipe it off with a damp sponge (4). This accentuates the forming marks and reveals the edges and curves in the form. 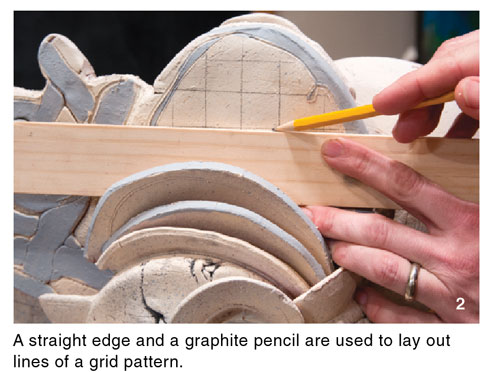 I have two chalk-line boxes (primarily used in carpentry/construction) that I have filled with a mixture of Ferro frit 3110 and a Mason stain (5). I use them to go back over the marked square patterns and snap lines where they are needed visually (6). It is very helpful to have a third hand here to either hold the line tight or snap it in place.

Thanks to the frit, the resulting colored lines are stable after the firing while still retaining a powdery look. This change in texture helps to define the line on an intuitive and visual level. Plus, I enjoy the idea of these boundaries looking porous and unstable.

After the piece is colored and slipped, I go over it with a mixture of Ferro frit 3124 to encourage fluxing in parts of the piece that I think will help balance the form visually (7). 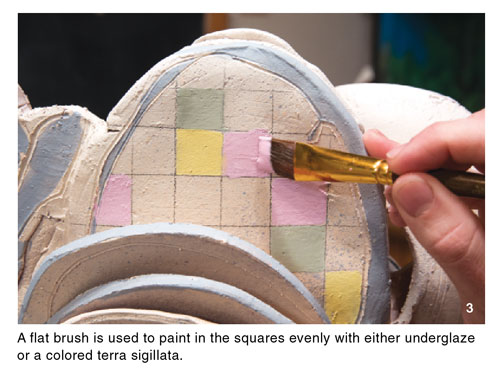 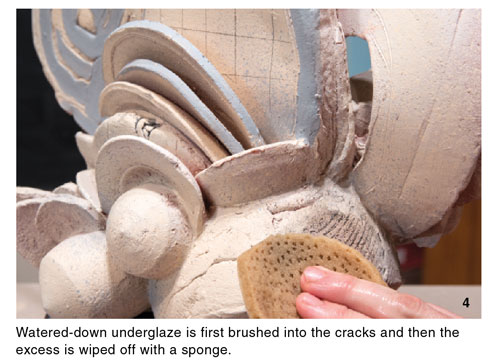 I originally sought an alternate firing method to address several issues dealing with form and surface. Here are som e benefits I have found while pursuing this technique: 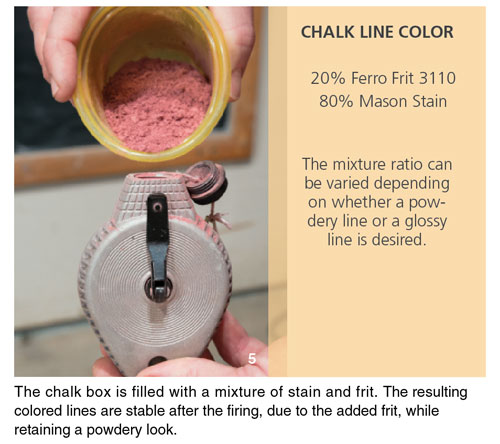 1. Firing non-vitrifying clay means less slumping and relaxing of the work during the maturing process, something that was negatively affecting my forms.

2. Ash not melting on the clay has several advantages for my work, most importantly, the pieces retain a crispness that shows tool marks and folds in the clay.

3. Firing to cone 01–2 allows me to retain a broader spectrum of colors, using terra sigillatas, stains, and underglazes that typically get washed out at higher temperatures.

4. Working in the field of ceramics is a costly endeavor with both time and resources. Firing to cone 1 can cut the firing time almost in half and the wood consumption by 40–60%.

In addition, this practice is not quite as dependent on the type of wood being used. Heat gain here is much less difficult than the last half of a cone 10 firing, where the BTU ratings of specific woods become more crucial. Less wood being used, less gas for splitting wood, and less time spent stacking wood all equal less of a carbon footprint and less backache.

There is no such thing as a free lunch, and this is no exception. Firing to earthenware temperatures is simply not the same transformative process as a cone 10 firing and contains a different, but not diminished, type of magic. I’m much more reliant on slips and applied colorants to keep from having a very dry and untouched surface. A trap that I had fallen into time and again was waiting for a wood firing to fix a sub-par pot—this method takes that option off the table. The results are less surprising in the final stage, but that is a trade off I am willing to make. 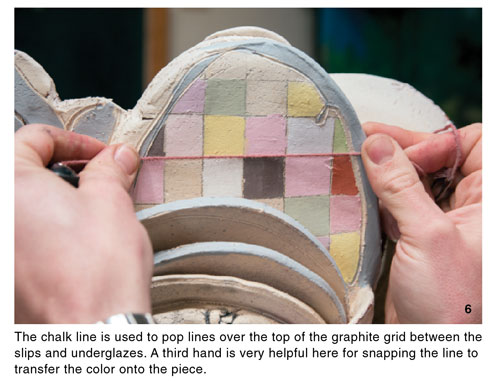 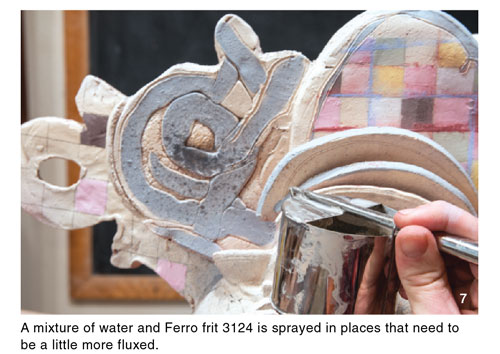 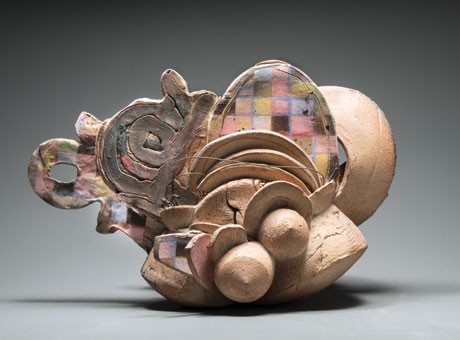 I feel it is of utmost importance to not see this method as a way to sidestep the labor-intensive aspects of a cone 10 wood firing. This is neither an attempt to imitate the effects of another process nor is it a rejection of previous conventions. It is simply an addition to the vocabulary that a wood kiln can produce.

Accordingly, it would be a misstep to continue using the same old rubric. True, some conventions will carry over, even some of the basic aesthetics. It would be unreasonable to expect otherwise, but I feel this is an opportunity to explore a different set of aesthetic values than the ones that have been handed down in tandem with wood firing. And ultimately, the shedding of comfortable paradigms is the biggest trade-off here.