A few years ago a friend of mine had us over for dinner and served one of the most delicious dishes I had ever had. It was a tagine (traditional Moroccan dish named after the ceramic pot it is cooked in), and my mouth waters just thinking of it. Since my husband is an excellent cook, I have often thought about making a tagine for him.* And after flipping through our book In the Potter's Kitchen, I might just get around to it sooner rather than later.

Today, I am sharing the excerpt from In the Potter's Kitchen that is inspiring me. Plus a recipe for a Shrimp Tagine that will make your mouth water! - Jennifer Poellot Harnetty, editor

*I know, I know. A tagine is a self-serving gift, but I swear he would love it too!

A tagine is a traditional Moroccan pot, much shallower than a bean pot, with a tall conical lid. Traditionally this pot is made from earthenware clay, glazed or unglazed, although it can be made from flameware or micaceous clay as well. Tagines can also be made from stoneware, but in that case they can be used in the oven only. This form is traditionally used to cook meat and vegetables to serve with couscous, but enthusiastic cooks have tried a wide variety of dishes in this style of pot. 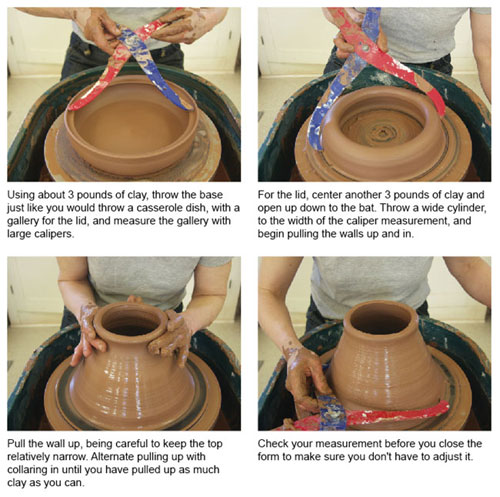 An earthenware tagine is suited for long slow cooking, with no high heat techniques such as sautéing. While modern Moroccan cookbooks frequently suggest cooking vegetables in oil in a tagine as a first step, traditional Moroccan cooks are more likely to layer everything in the cold tagine, allow it to come to a simmer, and add oil or butter towards the end of the cook time, for flavoring. A tagine can be used either on the stovetop or in the oven, although a large tagine may be too tall to be conveniently used in most ovens.

Tom Wirt, who makes flameware tagines, says “The secret to the tagine is that as it simmers on the stovetop, the moisture condenses on the lid and bastes the dish constantly. The shape of the lid is to accommodate the traditional chunk of meat or large vegetable in the center.Vegetables cut in long strips are then stacked around that center and are more braised than steamed in cooking. Relatively little water is used in cooking the dish.”

Traditional Moroccan tagines often have a hole in the lid near the knob; this hole is not necessary and seems to be purely decorative. According to chef Emily Swantner, “The top of the tagine is a bit removed from the flame, which allows steam to gather at the top of the pot and drip back down on the food, which keeps it from drying out. So, you DON’T want the steam to escape, just the opposite.”

In fact, if the lid has a hole, some cooks stuff the hole with a bit of vegetable. 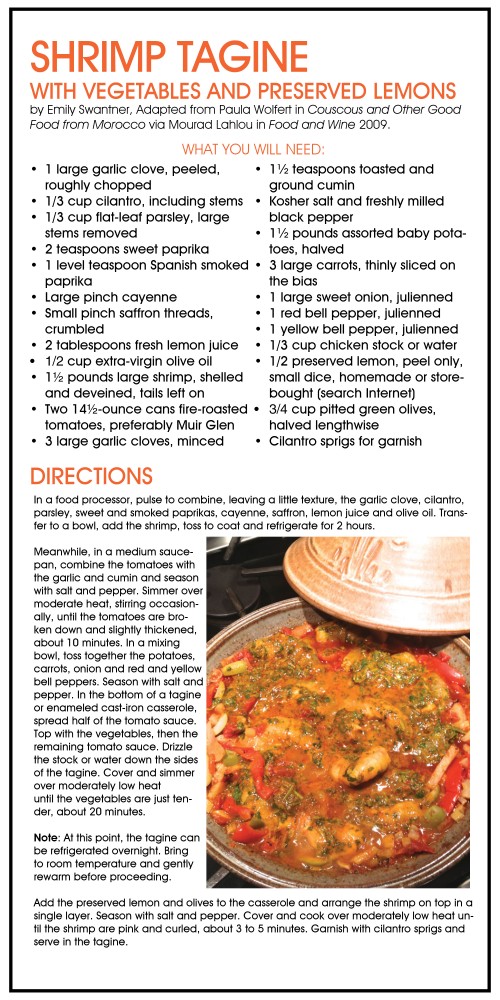 Curing a Tagine (from www.tagine.com)

1. Submerge the tagine in water for at least 1 hour. If you can’t submerge it, place it in a clean sink and slowly fill the base of the tagine with water until it stops absorbing it. Place the tagine lid upside down inside the base and fill it as well. Let stand for at least an hour to allow full absorption of water into the clay. An overnight soak is even better. Empty excess water and allow to dry for 5 minutes.

3. While the tagine is still wet with the oil, place it in the oven and set the temperature at 350°F and leave for 45 minutes. The evaporation of moisture creates a vacuum effect to pull the olive oil into the clay to seal it. Then leave the tagine in the turned off oven to cool down.

Want more tips for making pots for the kitchen? Learn how to make a lightweight Japanese teapot, a square baking dish, and a microwave baker!