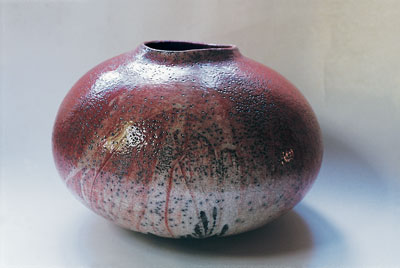 Nesrin During shows us how to combine wood firing and raku firing. As you'll see, wood firing isn't just about high firing. You can build a simple raku kiln and fire your work with wood to get stunning results. So, check out Nesrin's post today!  - Jennifer Poellot Harnetty, editor.

Texel is a small Dutch island on the North Sea. It is an island of sand dunes, natural lakes, sheep, tourists, wind and rain. In these quiet surroundings, I have been making ceramics for over 20 years. Some of my work is wood fired in a simple, self-built raku kiln. It is simple because it is actually made of stacked bricks and sized to fit what I'm planning to fire (sometimes I start firing small objects, then aggrandize the kiln by adding another one or two rows of bricks for the bigger objects). 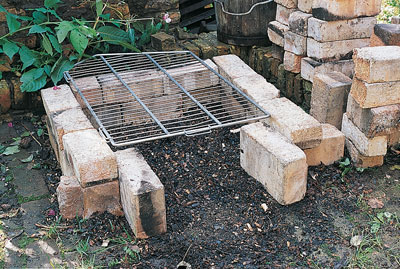 These kilns are built wherever I want them to stand, taking into consideration the direction of the wind. The day after I've finished firing, I put away the bricks, out of sight under a roof or in a shed to keep them dry until the next firing.

To begin, I level the surface with a layer of dirt; it will also protect what is beneath (concrete, for example, can crack with the heat). I look at the direction of the wind and accordingly build the firemouth to receive the wind. 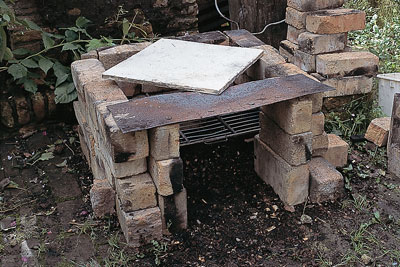 Depending on the size of the kiln shelf (it's going to diagonally span the walls), I lay two courses of bricks to establish the back and side walls. Upon these the grate is placed so that the ashes can fall through. (My iron grate was salvaged from a dump; one could also use a kitchen stove grate, which would last a few firings).

Then another two rows of bricks are laid, and the kiln shelf placed diagonally so that the walls support three corners. A piece of sheet iron (also salvaged from the dump, but you can also use a piece of angle-iron) across the front of the kiln supports the fourth corner. 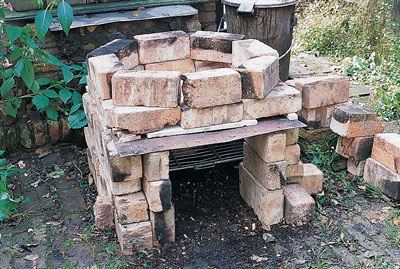 Because some of the bricks in the following course will stand on the kiln shelf, I have to raise the others to the same height with pieces of broken shelves. After this leveling course, a couple of rows are laid in a diminishing circular pattern. I also partially close the top of the kiln with broken shelves, leaving a central hole to function as a chimney.I fire this kiln (alone or with the help of students) with scrap wood. 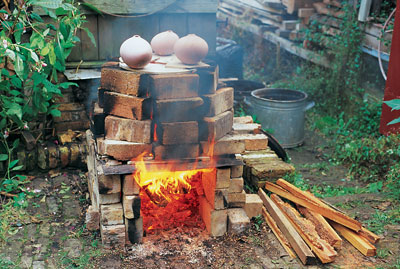 Make sure the wood should be dry and thinly split. I start with some newspaper and thinly split wood. The fire is well fed in the beginning in order to get the bricks to temperature, but after the first load is done, I fire with less wood and rake the fallen ash from underneath the grate to ensure the fire has enough oxygen to burn well. Because the kiln is so loosely stacked, I can easily create new openings in between bricks to manipulate the flames toward a certain direction, causing interesting effects on pots. 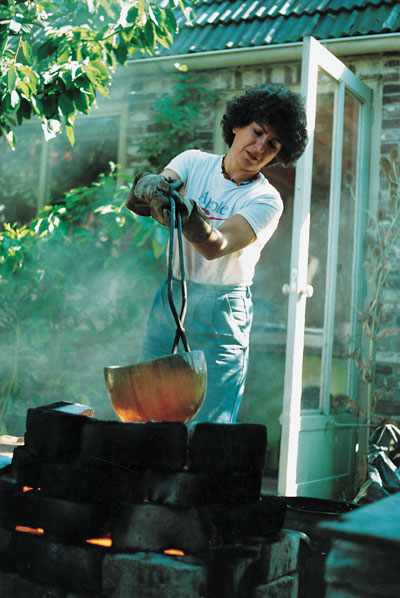 The pots intended to go into the next firing are placed on top of the kiln to dry. When the glaze on the pots inside the kiln is shiny and molten, I remove a few bricks from one side of the top to facilitate taking the pots out; the pots are then placed in a metal bin containing sawdustNesrin During removes a pot from a wood-fired raku kiln loosely constructed from brick. A typical kiln is built from about 50 insulating bricks (IFBs), a square kiln shelf (size depending on what to fire), a metal grill for a grate, a piece of sheet metal, and some broken shelf pieces. It takes about 45 minutes to build, and fires to about 1650°F in about 45 to 60 minutes for the first firing; thereafter, every load takes 15 to 20 minute.