We all know what reduction firing is, right? Or do we? The science of what happens in a reduction kiln and the resulting color palette might not be exactly what you think it is.

When I read Ryan Coppage’s article on reduction firing in the Ceramics Monthly archive, I realized that I didn’t have the definition exactly right. So I thought I would share an excerpt from the article in this post. After all, really understanding what’s happening in the kiln can only lead to better results! - Jennifer Poellot Harnetty, editor 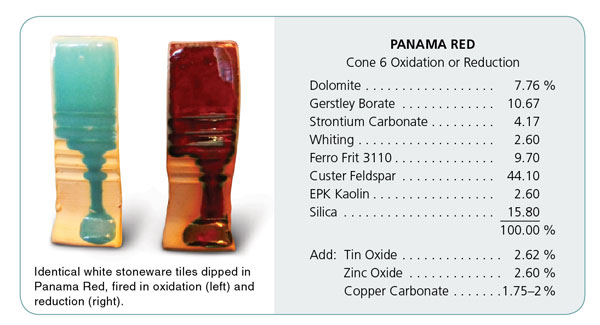 With access to enough oxygen to efficiently burn your fuel, you are almost exclusively producing water vapor and CO2, which will cause oxidation of your ceramic surfaces. This is the clean-burning, efficient, blue flame, which is why easy temperature gains are synonymous with oxidation atmospheres. Upon limiting the amount of oxygen access to the inside of your kiln via vents, flue control, or passive dampers, you are no longer producing purely CO2 from your fuel; you are now producing carbon monoxide (CO) and carbon black in the form of soot and char (C:H compounds in the ratio of 8:1 or so). Your flame is bright orange (1A) and you can see smoke and soot often rolling up and out of the kiln. Conversely, a fully oxidative flame is bright blue (1D), with transitionary flame compositions between the two (1B, 1C). CO and soot both deliver electrons to the surface of your pottery in the kiln. CO reacts with oxygen at the surface and forms CO2, leaving electrons behind. Soot will flow and adhere to the surface of whatever it touches in the kiln as incredibly small, free-radical black carbon particulate. As small carbon particulates build up on pottery surfaces, they begin to aggregate as soot and oxidize, causing a small flow of electrons into the ceramic surfaces.

These processes result in the metals in your glazes gaining electrons, which means the net charge or oxidation state is reduced. Potters take advantage of this atmosphere for reducing oxidation states of metal colorants, soot production in carbon trapping, and more specialized glaze effects via soaking.