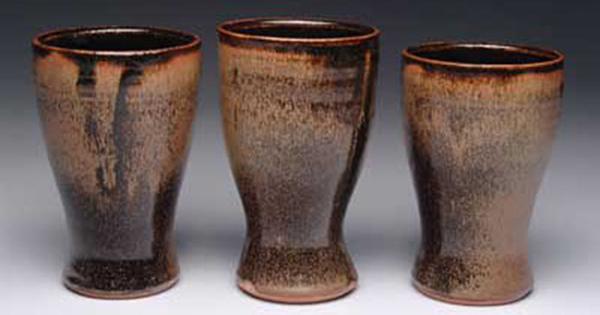 As I have mentioned before, ceramics is not the greenest of art forms, but it is nice to know that, with a little effort, potters can reduce their carbon footprints. One way to do this is to reduce your firing temperature.

But what if you are hooked on high-fire reduction firing? Erik Haagensen and Luba Sharapan had started to fire cone 6 reduction because of a defect in the kiln they'd purchased, but after seeing the results they had no reason to change back, even after the kiln was repaired. As John Britt points out in the following excerpt from Ceramics Monthly, firing to cone 6 is cheaper, faster, and the results are almost indistinguishable from high fire. - Jennifer Poellot Harnetty, editor

There seem to be a few obstacles in getting potters to convert to the idea of mid-range firing. First, there is the inertia of their current practice. Change is hard in spite of the obvious benefits, especially if you have been doing the same thing for 20 years and it is working.

Also, there is an underlying belief, although it is completely incorrect, that cone 10 is superior to mid-range or low-fire, and changing this mind set is an educational challenge. I think that this comes from the long historical European search to imitate Chinese high-fire porcelain. The goal was always to achieve high fire, so it gained the psychological high ground.

And finally, when you mention firing to mid-range, potters immediately want to change or convert their cone 10 glazes to this lower temperature. This is perceived as a significant challenge because it means that they will have to learn a glaze calculation software and unity molecular formulation. Most just want recipes that work. They know it will take time and effort to learn to convert all these recipes and they just don't want to spend their time doing that.

I don't recommend converting glazes to the lower temperature, because when you lower the firing temperature of a glaze you are using different fluxing oxides that have different color responses. So although it is possible to convert your glaze to the lower temperature, you will end up with a different glaze anyway. It is better to use the many tried and true mid-range glazes already in use and test them in your cycle. This is the same way potters find high-fire glazes; they get glaze recipes from books or from friends and then vary the colorants and opacifiers.

Although change is hard, potters should focus on the benefits of firing mid-range reduction. First, as stated above, it saves fuel, reduces your carbon footprint and costs less. Second, it saves time. It may take 2-4 hours to get the extra temperature of cone 10 and maybe longer depending on the size of the kiln. So rather than firing for 10-12 hours you will be out in 8-10 hours. Firing to mid-range also reduces the wear and tear on your kiln, which means that it lasts longer. Finally, and most importantly, you get great results!

After all this testing, we discovered that the methods used to test high-fire glaze types also apply to mid-range types and, as a result, we found some very nice glazes. Erik, Luba and the potters of MudFire Clayworks are proof of that. Hopefully, this will help other potters get started firing to mid-range reduction.

Glazes contain alumina and silica, which both melt at very high temperatures, so getting them to melt at mid-range temperatures requires different fluxes than at high-fire temperatures:

Sodium Oxide (Na20) is a strong alkaline flux and creates brightly colored glazes. It has a melting point of 1652°F (900°C) and a high expansion/contraction rate, which will often cause crazing in glazes. It is often found in association with potassium oxide in feldspars. Common mid-range sources include sodium feldspars (nepheline syenite-actually a feldspathoid-is the lowest melting feldspar and so it is often used at midrange. It is high in sodium and lower in silica than other feldspars and melts around cone 6.), soda ash, wood ash, borax, frits and Gerstley borate or its substitutes.

Lithium Oxide (Li2O) is the lightest weight, smallest particle size and most powerful of the alkaline fluxes with a strong color response similar to sodium and potassium oxides. It has a melting point of 1472°F (800°C) and has a low expansion/contraction rate, which can cause shivering in glazes. Sources include lithium feldspars and lithium carbonate.

Zinc Oxide (ZnO) is an auxiliary flux in oxidizing atmospheres. It has a dramatic color response, both good and bad, depending on the colorant. It can heighten colors with copper and cobalt oxides, but produces dull colors with chrome oxide. It has a melting point of 3587°F (1975°C), but if it is fired in reduction it will change to the metal zinc and volatilize at 1742°F (950°C). It has a low expansion/contraction rate, so it can help to reduce crazing. Sources include zinc oxide and calcined zinc oxide.

Boron Oxide (B2O3) is a glass former and a flux with a molecular structure similar to alumina. It melts at 1292°F (700°C) but begins melting at 572°F (300°C). It has a low expansion/contraction rate and produces good color response in glazes, with characteristic bluish, milky streaks and cloudy effects. Sources include Gerstley borate (or its substitutes like Gillespie Borate, Murray's Borate, Laguna Borate, etc.), borax and frits.

NOTE: Frits come in a wide range of types. They are used by industry as reliable and consistent sources of fluxing oxides in relatively insoluble form. They are relatively low in alumina and silica and are active melters, but they can settle rapidly.