Creating the Layered Look with Commercial Glazes and Underglazes Base Coating in Layers! Nancy Gardner with Burt Isenstein

Nancy Gardner loves commercial glazes and underglazes because the color choices are virtually unlimited. And she has no qualms about using commercial products instead of mixing her own.

In this article, she shares how she layers underglazes to create bright and beautiful floral designs on her pottery. - Jennifer Poellot Harnetty, editor

When the form is completely dry, begin the painting process. Hake brushes are best for the initial coats of underglaze (figure 3). They come in many grades but it’s best to splurge a bit as the cheap ones fall apart and leave bristles all over the work. Because red earthenware is so dark, it takes several coats of underglaze to get good coverage.

Particularly with brighter colors, apply 3 to 5 coats. It’s a good idea to slightly vary the colors in each layer for this initial stage; for a red bowl, paint one coat with a light red, then a coat of red mixed with salmon, then apply a red-orange mix, followed by two layers of red for the final coats. This gives the surface some depth along with good coverage. You can experiment with how thick to make each coat. If you go thinner, you might get some iridescence from the layering, especially from the blues and greens. When working on greenware, the underglazes dry almost instantly, so you can go from one coat to the next without much waiting in between. 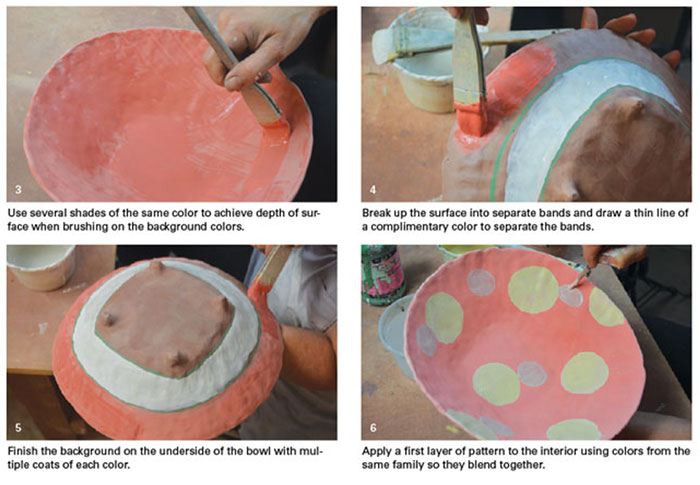 The next step is to initiate additional design elements. This can be stripes, dots, or splitting the surface into other areas of color. The bottoms of my bowls are striped. I use the width of the brush to establish the thickness of the stripes (figure 4). The outer stripe nearest the rim is the same as the interior color, followed by a contrasting color. I leave the area surrounding the feet bare and separate this area and the stripes with another contrasting color (figure 5). This same contrasting color is applied around the bowl’s rim in a thin stripe.

When adding pattern or decorative elements to a red piece, it’s a good idea to choose warmer colors—yellows, oranges, or lighter reds to give some liveliness to the pattern. Watercolor brushes work well for this, starting with larger ones and getting progressively smaller as the detail work demands. The decoration usually consists of two or three repetitive elements. Start with large yellow circles followed by smaller pink ones (figure 6). Then add white flowers that overlap and intersect with the circles. The overall pattern appears to go beyond the boundary of the rim, similar to wallpaper or fabric, which brings the viewer’s eye around the piece (figure 7).

Depth in the Details

Next add green stems and leaves to the flowers (figure 8) and thin, blue, graphic elements to the petals and surrounding area to fill in any overtly blank areas (figure 9). The stems act as connectors for the bigger flowers, while the blue graphics add depth. For inspiration, I look at all kinds of art that involves pattern, including fiber, painting, folk art, and botanical illustration. Large elements lead to details, sometimes black outlines for emphasis, sometimes just a shadow line. Often the back is split, with a different pattern on the bottom half or third (see figure 11). The last bit of detailing is painting black checkers on the green stripe around the rim (figure 10), then adding thin black lines over the white band around the foot followed by more tiny black checkers (figure 11). I also paint on my potter’s mark in the center of the foot. 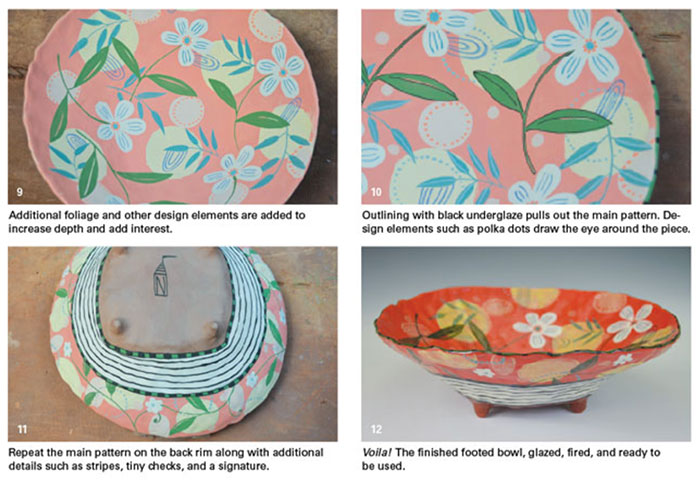 Bisque fire the bowl to cone 04. A slow bisque is important for success with low-fire clay bodies as it completely burns out and eliminates carbon and impurities that will cause glaze flaws. I use Amaco Clear Gloss glaze over the unpainted areas of my pieces. My general rule of thumb for glaze application is to brush several thinner applications using a soft, wide, watercolor brush. I thin the glaze with water so it covers the ware evenly, but I can control the thickness. It’s critical that the glaze dries thoroughly between coats to maintain an even thickness. If glaze is applied too thickly, it tends to bubble or crawl.

I use Duncan Satin Clear glaze over the painted areas. Satin glaze must be applied in three thin coats. If it’s too thick, it goes milky and obscures the color and detail underneath. The satin glaze opacity interferes with dark colors, like red or black, and I usually mediate the satin glaze opacity (on dark colors) with an initial thin coat of gloss glaze, then two coats of satin on top. I fire glaze ware to cone 05 with a 15-minute soak period at peak temperature. My glaze firing takes approximately 7½ hours. As anyone who has worked with clay for a while knows, a production formula that works for one potter may not work for another potter. One always has to be prepared to experiment with materials to develop and maintain an individual process and style.