Mixing ceramic stains into a clay body to color clay is an exciting way to create interesting surfaces on your pottery. Over the years on Ceramic Arts Network, we’ve posted a number of articles on these colored clay techniques–sometimes called neriage, sometimes called agateware, sometimes called murrinis. Yet, I am still discovering artists who are doing innovative things with the techniques!

In this post, an excerpt from the Ceramics Monthly archive, Cory Brown shares how he wraps thin sheets of patterned clay around a cylinder and then throws from the inside to create the shape. Super cool! - Jennifer Poellot Harnetty, editor

I began working with clay as a potter. As I learned more about the material, I opened up to the variety of ways in which clay can be manipulated. Colored clay initially came into my practice as a solution for working with beautiful, but difficult to use, native clay. My intention was to make an object using native clay from the Cub Creek Foundation in Appomattox, Virginia, where I was a resident at the time, and combine that with native clay from North Carolina that was processed at STARworks to make as a symbolic object bringing the two clay centers together through geology and a shared community. I started the project after a visit to North Carolina with fellow Cub Creek residents. Takuro Shibata, the director of STARworks, and his wife Hitomi—themselves former Cub Creek residents—hosted us, and we all formed a family-like connection. 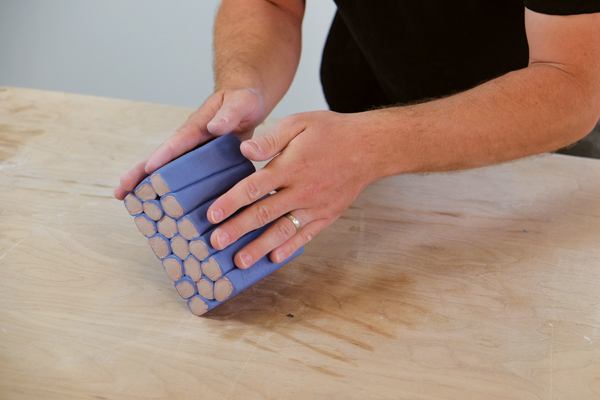 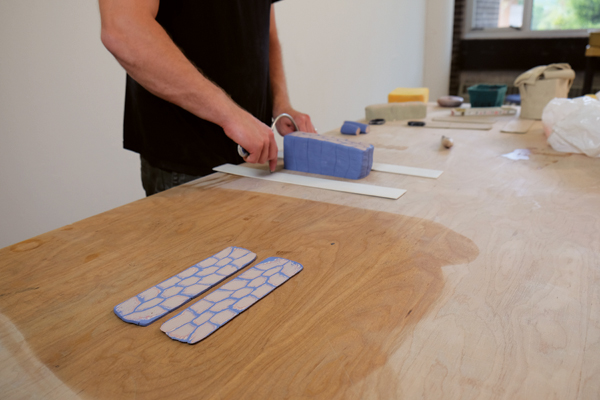 The attempt to make a quality piece at that time was a failure, but the effort opened up a door for me. Initially, I attempted to maintain the separate qualities of each clay. I paddled simple patterns of the Cub Creek clay onto more plastic slabs of the STARworks clay and handbuilt with them. I was attracted to the way the inlay would move and grow as I stretched and altered the slabs. It occurred to me that if I could do this on a thrown cylinder, I could achieve patterns of natural growth in the round. 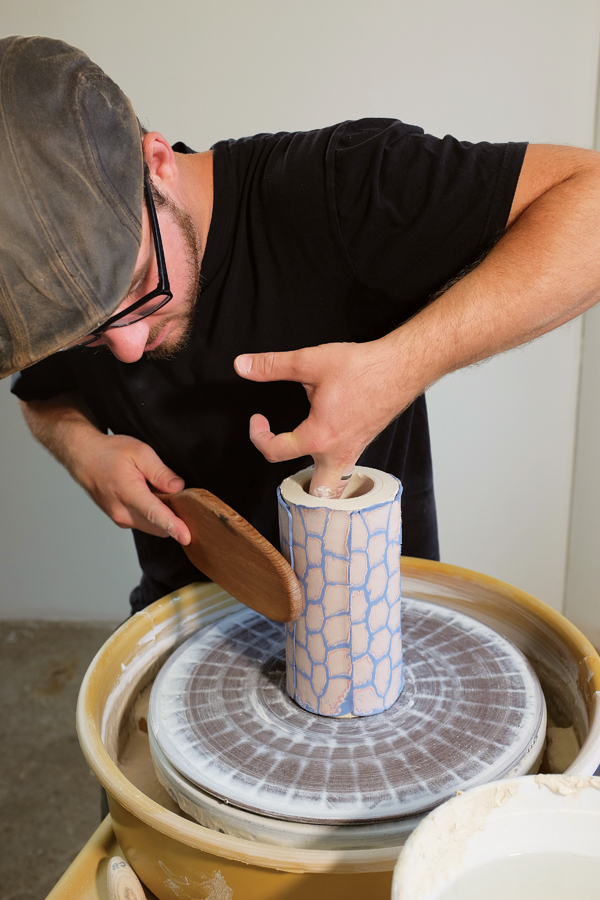 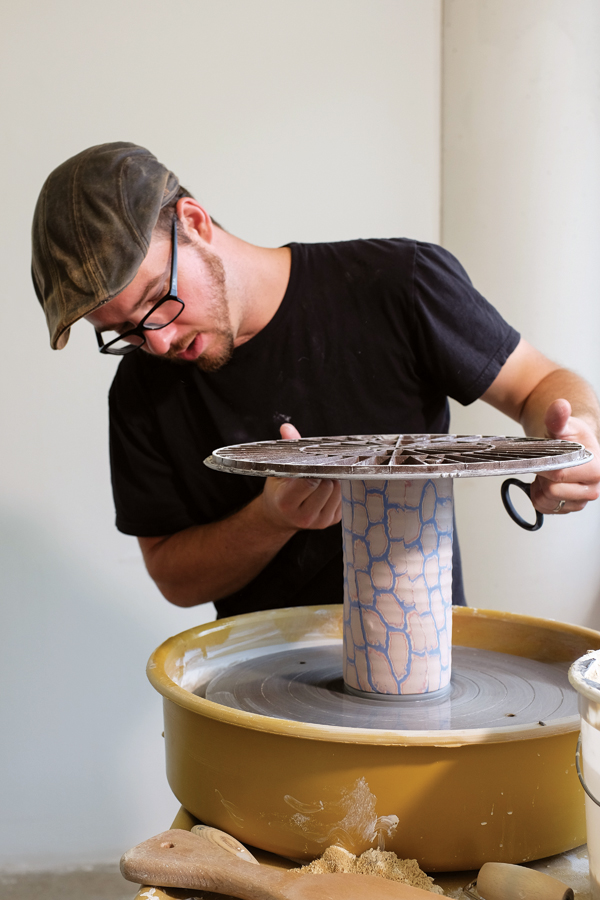 Of course, throwing with your fingers will smear and blur pattern on the outside of a form. To get around this, I first tried a four-part plaster mold wrapped around a cylinder on the wheel, pressing out from the inside to make the pattern flush. The technique evolved quickly as I was using a standard wooden roller (brayer) to fix the seams and to compress the clay as I stretched it out. The turning point was when I learned the initial cylinder needed to be up to an inch thick to accept the inlay. Then the colored clay could be paddled in, thrown thin afterward, and the final vessel formed completely using the wooden rollers on the outside.

After realizing the rollers’ potential, I customized them in order to achieve more complicated forms and maintain finer finishes. The rollers I use now are made with this purpose in mind;  I have developed a number of shapes and sizes to navigate the various forms I create (see 5, 6). The original rollers are lathe turned and have a hole with a binding post going through the center. Later rollers are outfitted with double-sealed stainless-steel bearings. 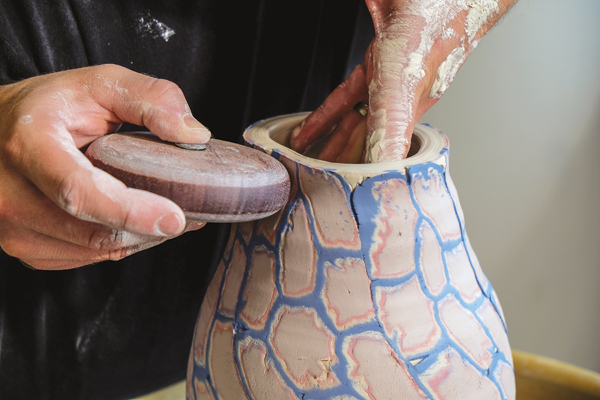 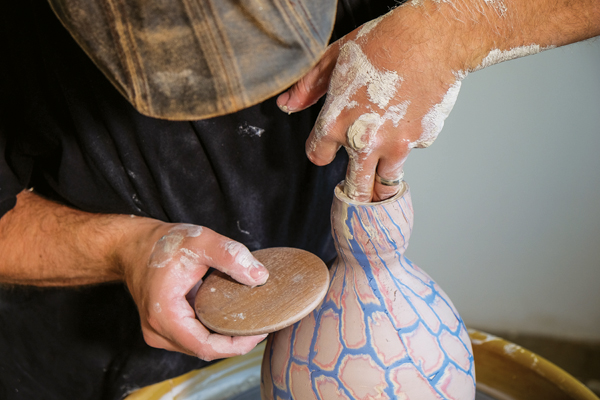 More recently I have been making clay cane for the inlay, which is similar to a Venetian glass technique called murrini, or the Japanese colored clay technique called nerikomi. I make colored clay coils and wrap multiple slabs of varying colored clay around that. Then this is stretched out, stacked, and formed into a block. Slices from the block can be applied directly to the cylinder. The outermost slab color ends up appearing like the background color. There are limitless opportunities to play with pattern and color relationships within the cane itself. This technique allows an element of chance into my work. The color and patterns grow into their final form, taking a simple pattern and adding life to it. I do have some control if I want the pattern to move more or less. However I typically choose to allow the demands of form to dictate the surface. 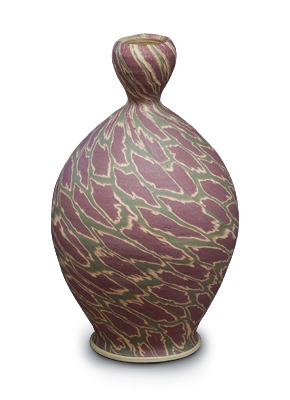