Ceramic Sculptor Ben Ahlvers Explains How He Balances a Full-time Job, a Studio Career, and Being a Father to Three Boys Ben Ahlvers

Ben Ahlvers is a busy guy. As a father to three boys, the director of exhibitions at the Lawrence Art Center in Lawrence, Kansas, and a ceramic sculptor selling and exhibiting his work in a handful of exhibitions per year, one might wonder when he finds time to eat or sleep. But he manages with his strong work ethic and by staying active and engaged in all three areas.

To say the very least, as a mother of ONE small boy with a full time job and a strong desire to make work, I am pretty much in awe of Ben. In today's post, he explains how he manages to make it all come together (without completely losing his mind). I am going to try some of his strategies to make it all work (without completely losing my mind). –Jennifer Poellot Harnetty, editor

Generally speaking my studio needs are simple. In the last several years I’ve worked in a garage or a basement space. I currently work in the basement of the building that I live in, which was originally a beauty salon. The working space is approximately 20×40 feet. With all of the time sensitive qualities clay has, it is nice to have the studio in the basement. My three boys occasionally work in the studio with me and we have collaborated on a few things over the years. 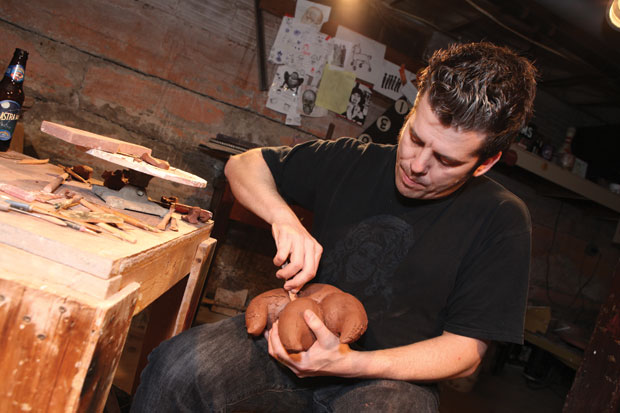 My construction process echoes a straightforward aesthetic, utilizing pinch and coil forming techniques. I occasionally use molds or slabs. There are usually several pieces in process at one given time. I do not have a kiln in my studio, so all of my pieces are bisque fired to cone 04 and then glaze fired twice to cone 05 at the Lawrence Arts Center, where I work. I glaze fire twice to enhance the texture within the clay and surfaces that the glazes create. I use underglaze and oxides for color and a few other glazes to achieve a variety of surfaces.

Since graduate school, I have learned that most of what I need to create my work fits in the tool box I’ve had for 14 years. I use a variety of wooden tools with different tips, a couple of well-worn knives, handmade paddles, ribs, and found and self-made texture tools. I have found that having several clamp lights available helps me, as I often work on pieces of different sizes. Constants in my studio are music, sketch books, and sometimes a kid or two.

My studio time is very precious to me. I’m very conscious of what I’m making and why, and I try to avoid becoming dictated by deadlines. I find it very useful to have a calendar of goals, like an exhibition or commission, and I try to be in the studio daily or at worst several days out of the week. I constantly want more time in the studio (as most artists do) so I have to be disciplined about what I’m making. 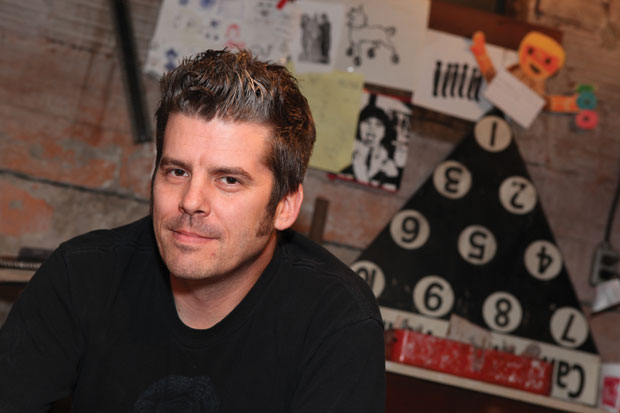 The challenge of being a father of three boys, and having a full-time job, and keeping the studio humming is never ending. I don’t often stop and think about the many facets of my life. I’ve been asked in workshops about how I balance all of these things and I’m not really sure what to say other than staying active in all these areas seems to work. I’m convinced that being raised in a blue collar steel town, working my way through school in a variety of industrial jobs, becoming a father at 20, and attending the schools that I did have formed my attitude on hard work and the benefits it provides. I take a great deal of pride in all three of these aspects of my life (children, studio, work) and when any of them are out of line or lagging it will upset the other areas in some way.

I received my BFA from Southern Illinois University, Edwardsville in 1998 and an MFA from Ohio University (OU) in 2004. I spent the three years between schools working as director of an arts center on a military base, teaching sixth grade, working as a production potter, and a printing assistant. One constant during that time outside of academia was making art and showing art. My former undergraduate professor, Dan Anderson, invited me to fire with him in his anagama. His mentoring, encouragement, and generosity during this time is something I’ll always be grateful for. During those three years, I was determined to prove to myself that I really wanted to pursue this art-making career path. Up to that point, my art had been created in the confines of an academic setting and I was aware enough to know that outside of school there are many other challenges. Not having a support system of classmates and faculty, and access to the ceramics facilities, plus the financial responsibilities of being an artist all concerned me. Confirming that I could deal with these challenges during my time outside of school was vitally important early in my career. 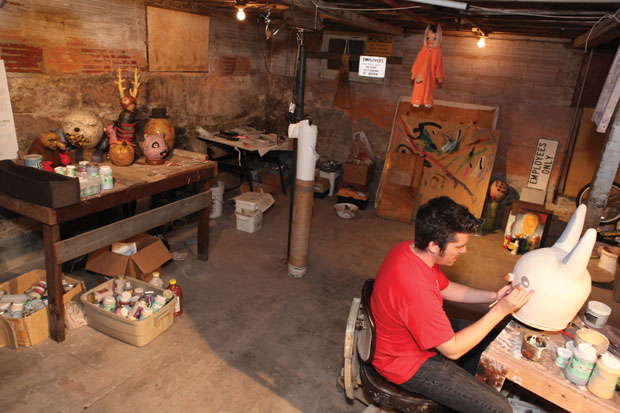 When looking at graduate programs, one element that was important to me was what alumni were doing, and what they had to say about the program. Choosing OU was easy after researching and talking with alumni, visiting the facility, and meeting with the professors. The MFA program challenged my studio work ethic and ideas and eventually made them stronger. Beyond furthering technique and articulating ideas behind the art, I was given opportunities to exhibit and speak publicly about my work, which has proved to be very useful in my professional life. Since graduating from OU, I’ve been working at the Lawrence Arts Center in Lawrence, Kansas. I initially came to manage the seven visual arts studios and eventually began directing the ceramics program and helping to manage the residency program in both ceramics and printmaking. Two years ago I became Director of Exhibitions, overseeing five exhibition spaces with more than 20 exhibitions per year. I find this position very rewarding. I direct the selection of exhibits, marketing, and installing. Having the opportunity to work with incredible artists from around the country (including Roger Shimomura, Hong Zhang, Rolling Stone Photographer Baron Wolman, among many others), curating exhibits, and helping to put together publications is not something that was on my radar five years ago but is certainly impacting my art and practice. This is a full-time position, which obviously influences my personal studio time and finances.

My position as Director of Exhibitions is by far my main source of income; I do however manage to sell most of what I make through various galleries and museum shops. I aim to exhibit my work in solo or small group shows three times per year. This strategy keeps me active and engaged in the studio but leaves room for my other responsibilities. There are often group show opportunities that arise throughout the year that I send one or two pieces to. 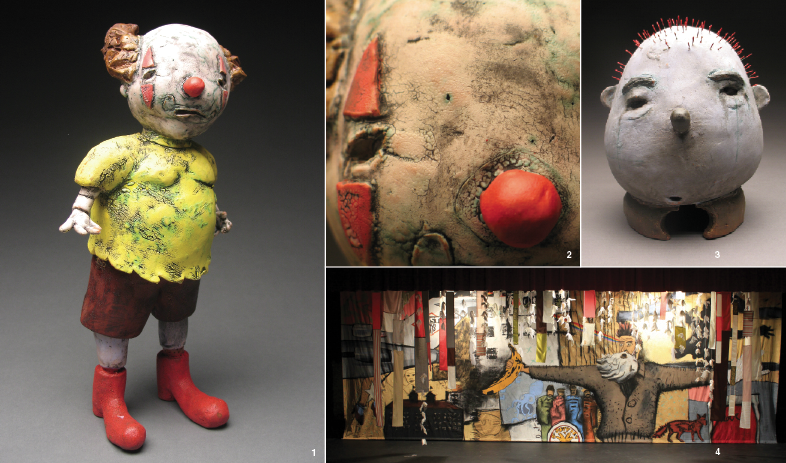 Recently, I initiated a concert series at the Lawrence Arts Center. This project encompasses my love of music and for Lawrence, Kansas. I designed and painted the backdrop that incorporated iconic imagery from popular music and Kansas history and culture. The challenge of tackling a 45-foot painting was very satisfying and took me back to my undergraduate days, when I focused on drawing and painting. The musicians and audiences have stunned me with their positive response to this particular project. The music series and my role as exhibitions director have provided me with many creative outlets that take me away from the ceramic medium and that has been surprisingly satisfying. Make no mistake that clay is where my heart is and probably the thing I’m best at.

I think it’s vital to stay active in all facets of life, and to be open to opportunities that present themselves.