Eliza Au combines both high-tech and low-tech methods to make her beautiful and complex ceramic sculptures that consist of repeating patterns. Inspired by spiritual artifacts from both the East and West (mandalas, rose windows, prayer carpets), Au sees her the symmetry and order in her work as a metaphor for finding inner peace.

Though she begins her process using three dimensional computer modeling and Computer Numerical Controlled milling, it all comes together in a good old wooden box. In today's post, an excerpt from the March 2012 Ceramics Monthly, Eliza shares her process and casting slip recipe and author Amy Gogarty tells us a bit more about the work. - Jennifer Poellot Harnetty, editor

Eliza Au loves pattern, symmetry, and order, finding metaphors for inner peace and spiritual healing in organized, repeating forms. In her work, she arranges linear ornaments around a central axis, a motif she identifies in spiritual artifacts from both the East and West including mandalas, rose windows, and prayer carpets. She points to attributes of symmetry and repetition in the cycle of life, DNA patterns, and the cosmos, with “its mathematical complexity, infinite repetitions, and compositions.” 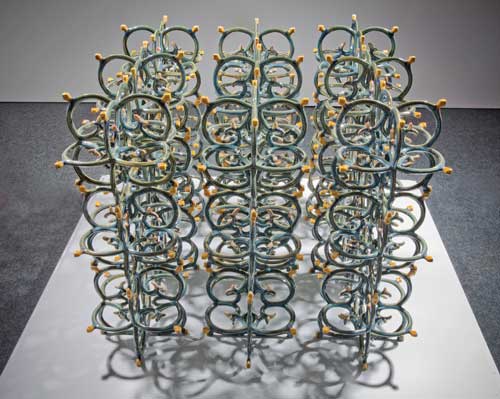 Au works extensively with molds to produce the large numbers of identical units required for her installations. Introduced to mold-making and casting processes when she took a class with Frank Bosco at RISD, she was drawn to a technique that allowed for perfect repetition, and she felt she had found her direction in ceramics. Unlike many who cast from nature or found objects, Au was never interested in replicating the everyday. Instead, she preferred to make conceptual statements based on complex interlocking structures, which required extensive planning and preliminary models.

Molds enable her to work across media. She is sensitive to the intrinsic qualities of her materials and allows them to influence each other through what she calls “cross-pollination.” Often, economic factors govern her choice of material. For example, a work that would take a long time to make in metal or ceramics can be made quickly from paper, something she discovered early on when using paper to mock-up an idea. She came to see the soft drape of the paper as something positive to be exploited rather than overlooked, and she brings a similar openness to the use of digital technology.

With the advent of CNC (Computer Numerical Controlled) milling and the Rhinoceros™ (Rhino) 3-D modelling program, Au is able to bring a project from concept to completion more quickly and with greater assurance. Rhino allows her to design a form, examine it from any direction, and evaluate different aspects of her model efficiently. She has used CNC technology to produce prototypes for glass projects, but she often prefers to make her original from Victory Brown microcrystalline wax using her Rhino drawing as a guide. For slip-casting clay, she begins with soft plaster, which she carves into a model and later casts to make a mold. In addition to plaster, she has worked with silicone and other materials depending on the requirements for the particular material she is casting. 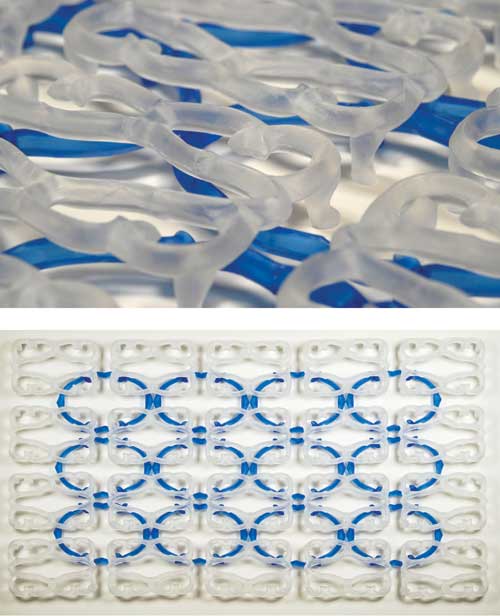 Au’s interest in spiritual and personal exploration is independent of any specific religious or philosophical system. Her use of ornaments and patterns from a variety of contexts reflects her placement in a multicultural society. The use of pattern and ornament to express the sacred has deep roots in many cultures. In Ornament: A Modern Perspective, art historian James Trilling writes that displays of luxury constitute an “almost universally understood metaphor for the sacred veneration made visible and tangible an offering up of that which is most demanding of effort, skill, and expense.”1 Although Au’s sculptures and installations do not make specific religious claims, they focus effort and skill toward suggestions of the sacred.

Axis consists of 27 modules arranged in a cube with nine columns, each stacked three modules high. Each module consists of twelve slip-cast stoneware components measuring six inches square when cast and slightly less when fired. The modules are assembled in layers inside a wooden box prior to bisquing (see Building in a Box below). The whole is spray-glazed a deep blue-green that breaks to yellow-green and bright blue at the edges. Tips to the curling forms are glazed yellow, making the overall construction rich and variegated. The cubic arrangement resembles a dense thicket or a cage constructed from Gothic tracery. The title was arrived at only after the work was completed and refers to the three axes (X, Y, and Z), that constitute the mathematical definition of three-dimensional space. From certain angles, the form is clear and easily read, while from others, the eye becomes lost in teasing out and following the complex, curving forms. 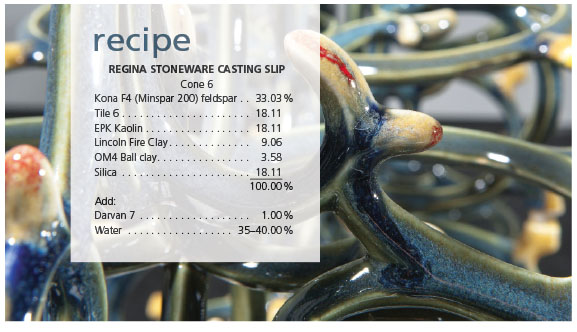 While Axis is strongly three dimensional, Au also produces floor- and wall-based works that recall carpets or textiles from the Middle East and Asia. The use of the prayer-carpet format suggests prayer and meditation, the creation of a sacred space. Au points to the combination of mathematical relationships, abstract vegetal forms, and potentially limitless repetition that were thought to represent the divine through replicating the underlying patterns of nature. She responds to the color, texture, and softness of carpets, and plays with dualities of hard/soft, rigid/flexible, and durable/fragile that emerge through contrasting ceramics, glass, and textile.

Building in a Box

In making Axis, I was faced with the problem of constructing and firing a complex form. After two failed attempts to make a casting mold of the entire piece, I discovered using a wooden box as a form when assembling the parts worked well as it allowed me to touch the piece as little as possible and to remove the form later without hitting or jarring the piece.

To create Axis, I used three book molds, each of which produces four components. In a book mold, both sides of a mold section are used to create two different pieces. When sandwiched together with two end cap sections, each mold is completed. A stoneware casting slip is poured into the book molds and allowed to set for seven to ten minutes (figure 1). Four molds for rectangular posts that will be used as firing supports are also poured at this stage. These supports are made from the same clay and will shrink at the same rate as the piece. After the molds are turned over and drained, they are left for 15–20 minutes for the clay to stiffen and release from the mold (figure 2). The individual pieces are then removed from the mold and placed on a sheet of foam to prevent deforming. They are allowed to dry another 15–20 minutes.

To start building the piece, the wooden box is placed over a Rhino drawing of the cross-section of the piece, and the rectangular posts are placed in the corners of the box (figure 3). For the first layer, four pieces are joined vertically at 90° to each other. For the second layer, four more pieces are joined at right angles to the first layer (figure 4). The corners of these pieces are supported by the rectangular posts. The last layer is joined vertically to the second layer.

The piece is left to dry slowly in the box to make sure the joints will hold. Two sides of the box are unscrewed (figure 5), and, after the piece is hard enough to pick up, the joints are smoothed and patched with clay. I dry the piece with plastic over it for at least one day and then covered with fabric overnight prior to putting it in the kiln. Green underglaze is applied where the piece will touch the rectangular posts and the kiln shelf.

The pieces are bisqued with the rectangular supports. After the bisque, the corners and points are taped to resist the glaze (figure 6). The piece is put on a banding wheel and sprayed with glaze. Places where the underglaze was applied are sponged to remove glaze. After this, the glazed pieces are put into the kiln with the rectangular supports and fired to cone 6 (figure 7).

To transport my work to the Gardiner Museum, I hired a shipping company to pack my work. They used rectangular foam with a cross groove cut into it to hold each piece in place in a cardboard box (figure 8). Axis was packed in three layers of nine boxes in a large wheeled crate for shipping.