All Mixed Up? Check Out Our Guide to Clay Mixers and Pugmills! Bill Jones In all studios, potters are faced with the dilemma of recycling scrap clay, and in many studio situations, it's essential to be able to mix custom clay bodies. Additionally, some studios require clay that is ready to use without any additional wedging, either because of time constraints or concern for wear and tear on the wrists. With the right machine, you can easily deal with scrap clay and mix custom clay bodies when they're needed.

Here, Bill Jones presents an overview and an explanation of the different clay mixers and pugmills out there. - Jennifer Poellot Harnetty, editor

There are four common types of clay processors on the market: the horizontal-shaft hopper mixer, the vertical-axis rotating-drum Soldner mixer, the pugmill and the combination mixer/pugmill.

Hopper Mixer This type of machine is simply an adaptation of the traditional commercial dough mixer and consists of an open or lidded hopper with a horizontal mixing shaft. In a hopper-type mixer, it's normal to add dry materials first, unless you're reprocessing scrap. Some hopper mixers are equipped with a reversing switch to allow you to reverse the direction of the blades several times to ensure complete mixing. When recycling scrap, clay should be in a slurry, meaning it should be slaked first (dried then soaked in water). Recycled clay requires adding more dry mix until the correct consistency is reached. Mixed clay is removed from the hopper by hand.

Soldner Mixer Named after its designer, Paul Soldner, this mixer consists of a chain-driven rotating reinforced concrete tub with stationary interior bars that mix and blend the clay quickly and effectively. The Soldner mixer works best when the water is added first. After dry materials are added, the mixture is rotated through stationary bars that chop and blend the clay until the desired consistency is reached. Many studios use the mixer as a slurry bucket. When the tub is half full, they turn it on, let it run for a while and then add dry clay mixture to it. When the mixing is complete, the mixer is unloaded by hand and stored. 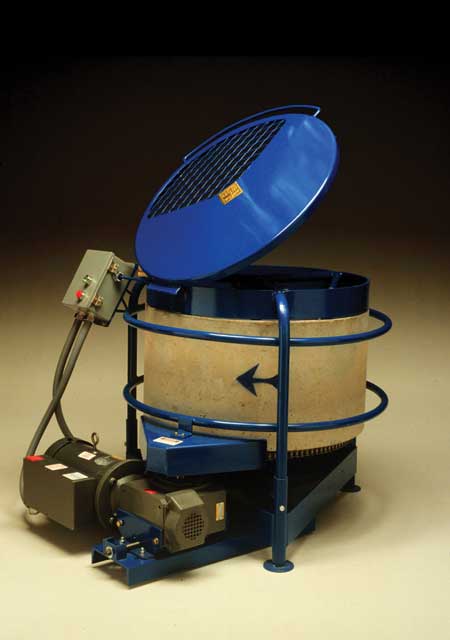 The simplest common analogy for a pugmill is an oversized meat grinder. Moist clay is fed into a hopper, forced through a horizontal barrel by a series of rotating blades, and, after blending, is finally extruded from a restricted opening at the end of the barrel. A pugmill equipped with a de-airing vacuum attachment can produce clay that is ready to throw without any further wedging. The pugmill is best suited for final blending of clay bodies, for processing clay mixed as slurry and stiffened to plastic consistency, and for processing slaked, stiffened and recycled clay. It can also be used for blending several clay bodies together, and is especially useful for adjusting the moisture content in clay.

As the name implies, the mixer/pugmill provides the features of two machines. Consisting of a hopper for blending dry materials or reclaim feeding into a pugmill, these machines are an alternative to buying two separate machines. Within this group of machines, the pugmill portion can serve in one of two ways-as a discharge unit for the mixer or as a separate, fully functioning pugmill. In the former case, clay constantly moves through the machine and has to be returned to the mixer after being extruded. In the latter type, a switch controls separate mixing and pugging actions.