Clay Culture: We Owe it to the River Claire O'Connor 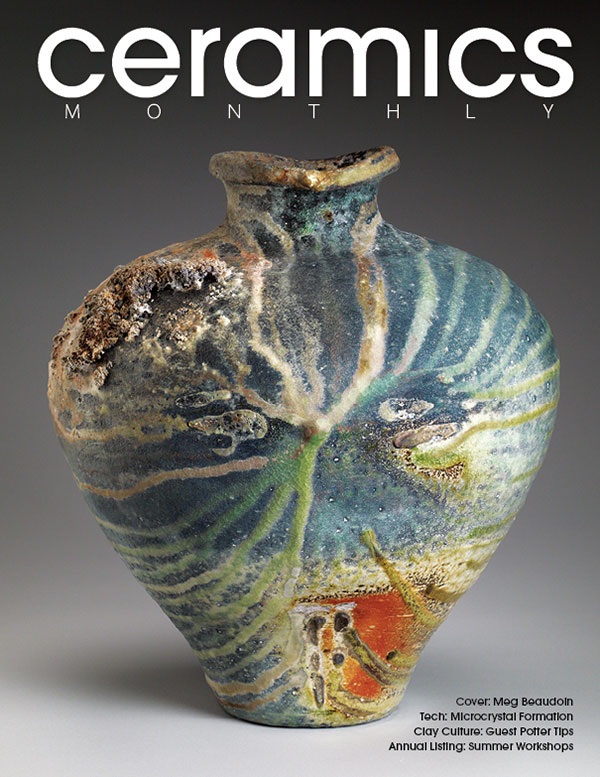 Cahokia represented one of the most complex and elaborate social and political structures of prehistoric North America. The pots and shards found on these ancient sites hold many clues to how earlier cultures lived and thrived in the fertile land in the present-day Midwest.

Cahokia was the largest and most ancient city in North America. Located across from present-day St. Louis, Missouri, at the confluence of the Mississippi and Missouri Rivers, Cahokia began as one of many small villages in the area, all depending on the life provided by the rivers. Starting about 700 CE the city began to grow until by 1050 CE it reached a maximum population of 20,000—more people than any European city of the time. At this maximum, the city covered about six square miles of today’s Collinsville, Illinois, East St. Louis, and parts of St. Louis, Missouri. It included about 120 man-made earthen mounds. The largest of these mounds, Monks Mound (1000×700 feet and 100 feet high) was similar in size to ancient structures in Mexico and Egypt. The city featured huge plazas for public gatherings, celebrations, and games. The site also includes remains of Cahokia Woodhenge—a series of large timber circles. Cahokia was North America’s first metropolis. 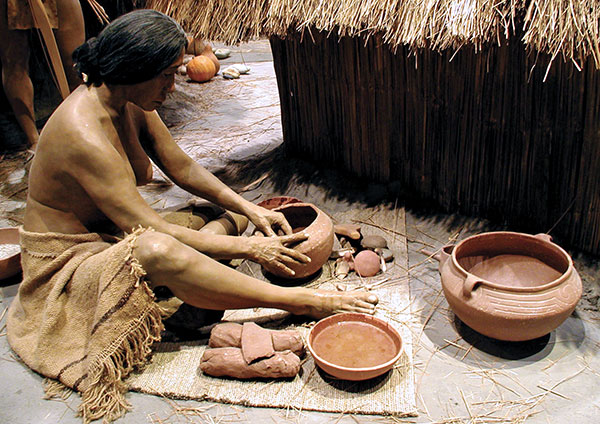 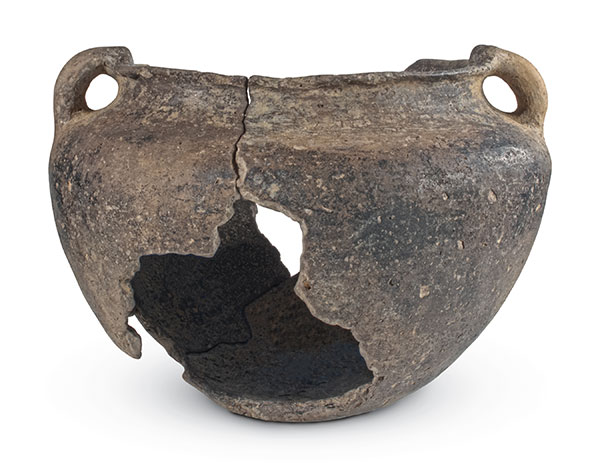 Cahokia is in the heart of the largest and most fertile area in North America. At its beginning, local hunting, fishing, and farming met the needs of Cahokia’s modest population. Cahokia owed a good deal of its success to the arrival of corn from Mexico. Corn is a very productive and dependable crop, and in Cahokia’s exceptionally rich bottom land and the warmer wetter temperatures, yields exploded.

Fewer farmers could now produce enough to meet the needs of an exploding population, leaving some to turn their attention elsewhere, producing weapons, tools, jewelry, clothing, and pottery and clay sculpture.

The mighty rivers and their hundreds of tributaries gave Cahokia everything—a central location with easy river transport and extensive trade routes (Minnesota to the Gulf of Mexico and Oklahoma to the Carolinas) along which to export and import goods, raw materials, and ideas. Further, the extremely fertile riverine soil produced an agricultural excess, which attracted a blooming population.

The clay provided for Cahokia by the magnanimous rivers was awful. Sticky, lacking plasticity, and with a huge shrinkage rate, it was later called river gumbo. Without help from additional materials, it was useless. But once again, the river provided, in the form of a dependable and abundant supply of mussel shells to temper the clay. The 10–15% shell temper provided calcium carbonate and a flocculant to this river-bottom gumbo. Vessels formed from this clay had stronger walls and bottoms, which were more tolerant of the varied shapes and prized round bottoms. The resulting thinner and stronger walls could better withstand thermal shock, and the smoother surfaces made cooking and cleaning easier, inviting more complex forms and innovative decoration.

Cahokia’s ceramic vessels provided the best ways to haul, store, and ship grains; the only way to cook corn, grains, and beans; and the ideal way to distill, ferment, pickle, brew, serve, pour, eat, and drink. In addition, the new clay filled the need for decorative and ritual sculptural items. Specialization and technological advancement made possible by the rivers resulted in high production, distinct and varied forms and design, excellent quality, innovation, and a competitive edge.

Archeologists suggest that women were likely the pottery specialists. Techniques included coiling, pinching, shaping, as well as making and assembling slabs. Working on the ground, a woman rolled coils, adding each onto the previous layer, turning the growing pot as she worked. She may have slightly pinched each coil to attach it to the lower coil. The pot was further shaped and then joined securely using a wooden paddle on the outside and a stone or clay anvil on the inside. It seems likely the next steps were a final scrape (inside and out) with (probably) a mussel shell and then the addition of the important and decorative rim and handles, which might include modeled and pinched animals or mythical creatures. 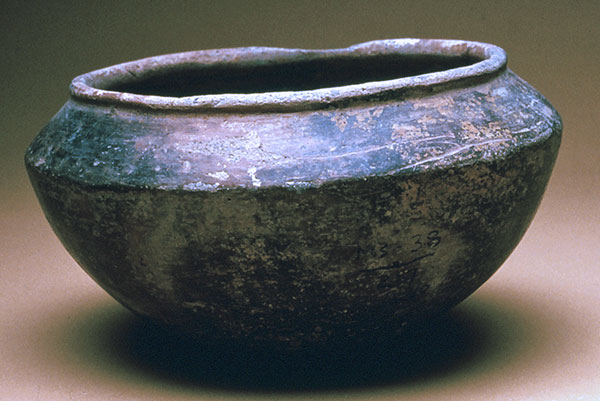 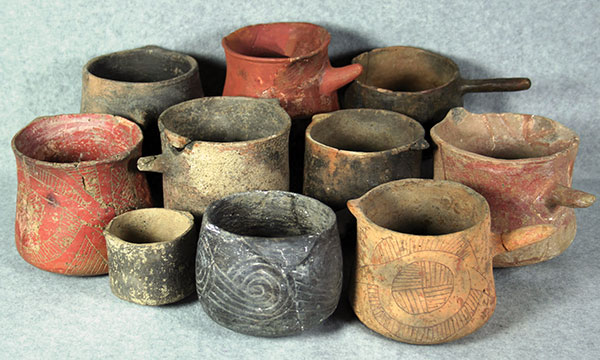 The most sophisticated pots, destined for local or foreign elite, might be painted with clay slips to further smooth the surface. To add color, galena produced white, hematite made red to purple, graphite produced black, ochre resulted in red to orange to brown, and various plant materials whose colors could survive the firing were also used (see figure 5). At this point, the potters’ choices included burnishing the surface, either before or after decorating, incising a design through the slip, as well as clay or slip inlay and clay additions.

Pit firing was most likely the predominant firing method. Starting with a shallow pit, pots were placed in a circle around a small fire and gradually moved forward toward the center as they dried and warmed. The fire would be brought to a roar. Pots could be fired to completion in that roaring blaze or covered with manure, clay, dirt, or sand to slow combustion and preserve heat. The target temperature would have been around 1500°F (816°C).

The rivers’ fertile bottom lands, silty clay, and river mussels are all still there. But for reasons not completely understood, people began leaving Cahokia around 1200 CE. By 1400 CE, the site was empty. With no evidence of violence, science looked for other explanations. There are many possibilities but the Little Ice Age is currently favored. Temperatures began dropping in the Northern Hemisphere around 1225 CE resulting in crop loss along with unpredictable hunting and fishing, which could lead to famine, competition, and conflict. And this time, the river provided a handy escape route. 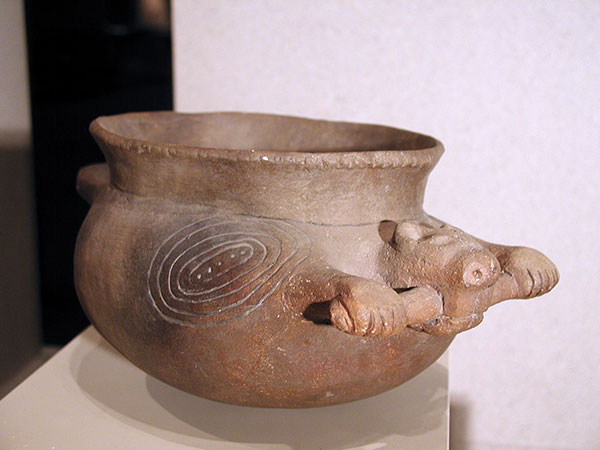 In 1600 CE a French explorer was the first European known to have visited Cahokia. Over the following 400 years, others followed—conquerors and colonizers, settlers, farmers, opportunists, and finally scientists and visitors who wanted to understand, learn, and appreciate.

It took centuries for Europeans to accept and respect that Cahokia was a valuable Native American achievement. By the time state, national, and international forces stepped in, many of Cahokia’s sacred and secular places were lost or destroyed. Today, those portions are covered with light industry, housing developments, urban waste, and interstate and local highways. The portion that survived is located in Collinsville, Illinois. This site is legally protected and with state and national funding is being studied and restored.

the author Claire O’Connor is a potter and pottery teacher in Minneapolis, Minnesota, and a studio artist at Northern Clay Center.