Appears in the Nov/Dec 2018 issue of Pottery Making Illustrated. 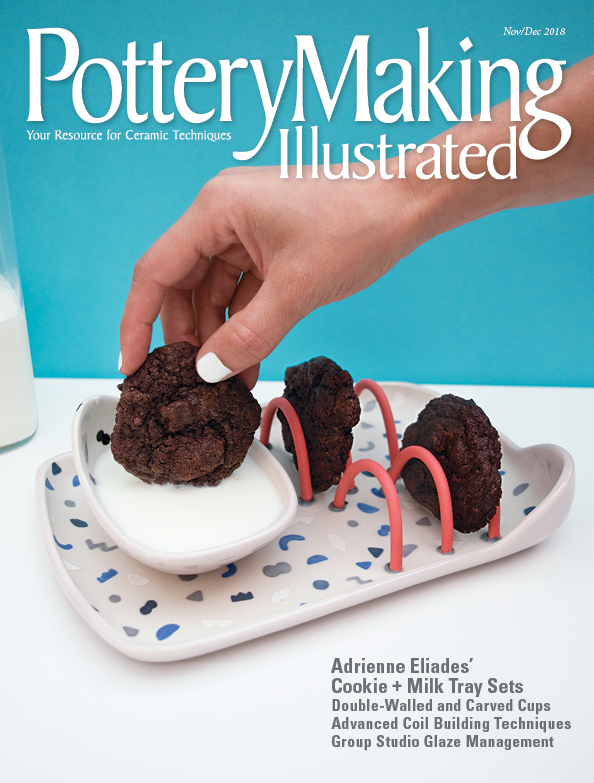 The coloring oxides are the transition metal oxides vanadium, chromium, manganese, iron, cobalt, nickel and copper. Transition metals can combine with different numbers of oxygen atoms to give different colors. They often change color after firing, and the color depends on the type of base glaze and whether it’s fired in oxidation or reduction. In electric kilns, there’s sufficient oxygen for the metals to form their highest oxidation states, so iron will form ferric oxide (Fe2O3), which is rust brown. In reduction in fuel-burning kilns, the fuel is starved of oxygen and draws it from the clay and glaze, reducing iron to ferrous oxide (FeO), which is black and acts as a flux. Iron oxide (FeO or Fe2O3) in very small quantities in glazes (1–2%) fires yellow in oxidation.

Coloring oxides are usually added to glazes in small quantities (less than 5%), although iron and manganese can be added in larger amounts (up to 25%). Carbonates can also be used, but they are slightly weaker colorants and break down to form oxides, giving off carbon dioxide during firing. Soluble salts (chlorides, nitrates) can be used, but they are highly toxic. Solubility of colorants in glazes increases with firing temperature, and is aided by active fluxes such as alkalis (sodium, lithium, barium) and boron. Note: Many metal oxides are toxic. Wear protective gloves and a respirator when mixing glazes or stains/washes and make sure your kiln is well ventilated to avoid inhaling fumes from the firing.

When fired in oxidation, a small amount of iron oxide (1–5%) gives a honey- or amber-yellow color. Iron oxide in a barium glaze high in zirconium will also give a yellow color in reduction.  Vanadium and tin oxide are also used to make a yellow stain that can be used at higher temperatures than antimony, but which doesn’t give such a bright yellow. Cerium and titanium give a creamy yellow, as does rutile. A small amount of nickel (1–3%) along with titanium (10%) can produce a mustard yellow.

To obtain bright yellows, it’s necessary to use a commercial stain. Praseodymium oxide and zirconium silicate are often used to make yellow stains, although they aren’t as strong as cadmium-sulphide yellows, which are bright orange-yellow. Zinc sulphide is added to cadmium sulphide to make light primrose-yellow stains. Be sure to review which oxides are present in the stains you purchase so you can predict the intensity of yellow in your glazes.

Excerpted from Colour in Glazes by Linda Bloomfield, and published by the American Ceramic Society. Available on the Ceramic Arts Network Shop at https://mycan.ceramicartsnetwork.org/s/shop.