Appears in the Jul/Aug 2020 issue of Pottery Making Illustrated. 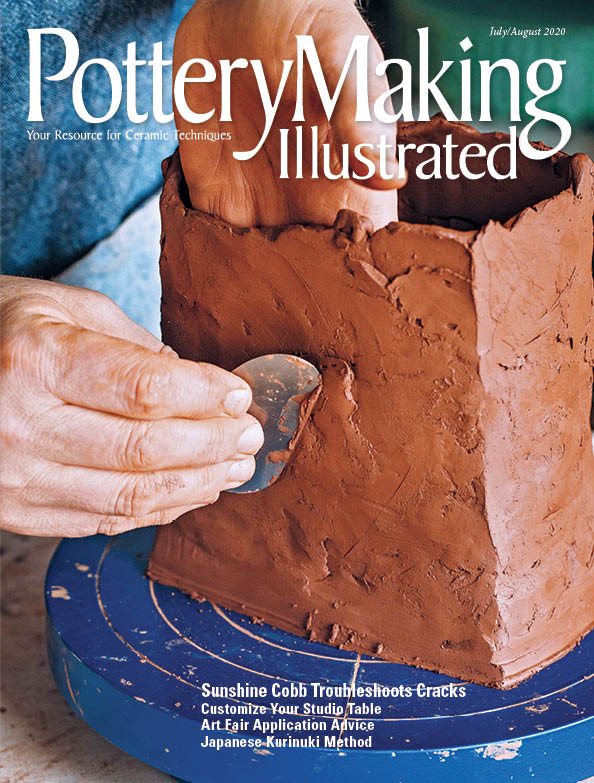 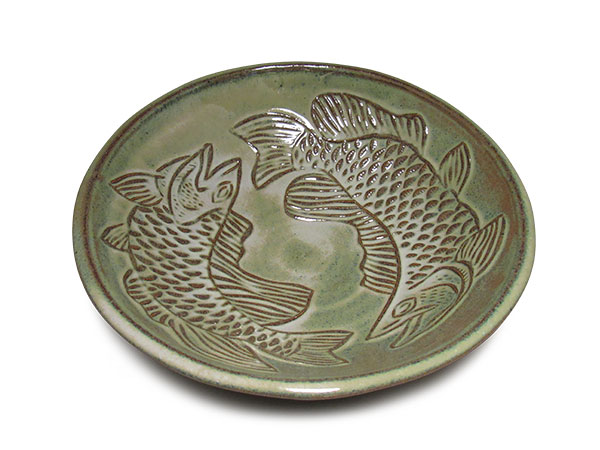 Several years ago, I discovered an exciting way to create bowls with raised relief designs by using bisque-fired bowl molds on the pottery wheel.

Begin by throwing a bowl on the wheel. Since it will be trimmed into a dome and carved, I usually prefer to use smooth clay with little or no grog. The walls of the bowl should be fairly thick—I want my mold to be durable for use after it has been bisque fired.

Consider the pitch when making the bowl. If the sides of the bowl are steep and the carved design is deep or elaborate, I often have problems releasing the bowl from the mold. When clay is pressed against the bisque mold, it immediately begins to shrink and constrict, which could make it difficult to remove from the mold, so I recommend starting with a fairly shallow bowl design.

After the bowl has been thrown on the wheel, attach a handle or knob inside the bowl on the bottom to help in releasing finished forms later on. Until the bowl is leather hard, leave it on the bat or wheel head, being careful not to distort the bowl or rim. It’s very important that the bowl is perfectly round and symmetrical, so that after the bisque firing it sits flat and can be centered on the wheel head. When the bowl has dried to a leather-hard state, flip the bowl over and trim it into a dome (1), then smooth with a damp sponge. 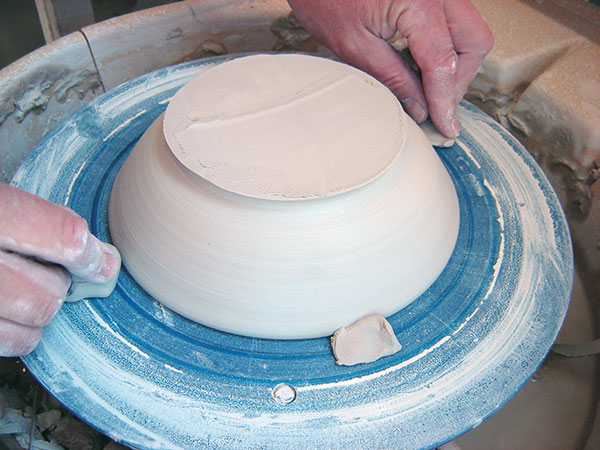 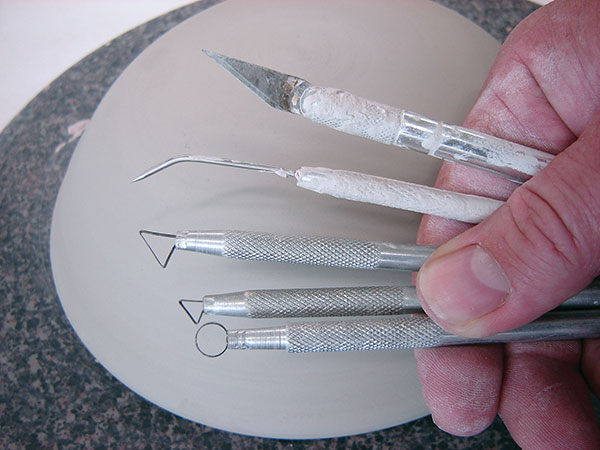 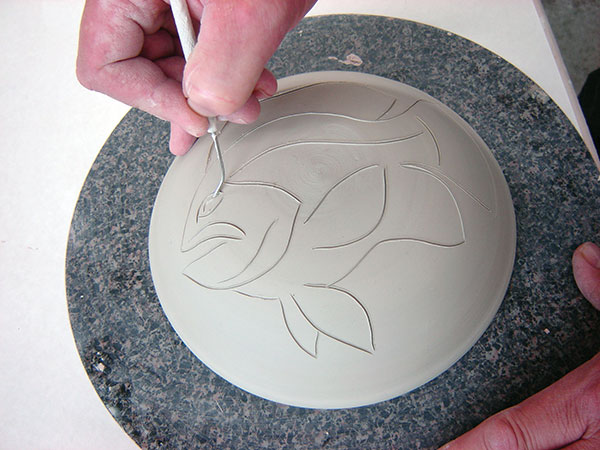 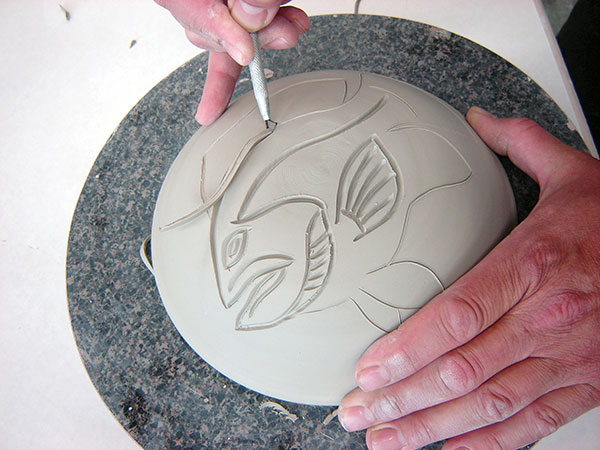 I love carving leather-hard clay that’s slightly softer than a chocolate bar. My tools of choice: an X-Acto blade (preferably new), a needle tool with a bent tip (use a blowtorch to heat the end of the tool before bending), and a variety of mini-ribbon tools (2). I also prefer to work on a banding wheel.

I often sketch my design lightly with the needle tool (3). The bent tip allows me to drag the needle without creating burrs or scratching the surface too deeply. The mini ribbon tools are great for carving designs (4), but surface textures can also be created by pressing the ends of modeling tools or other objects into the surface (5). I use my X-Acto blade to carve designs, although to remove clay I must make two cuts from opposing angles (6) and take care not to create undercuts. For each cut made with the X-Acto blade, the blade is held flat at approximately a 45° angle from the surface.

Sometimes I like to carve deep marks when the bowl is a softer leather hard, and then make more marks later after the bowl has hardened. I think a variety of textures and carved lines can add interest and dimension to the finished design.

When the bowl is dry, take some time to clean up any burrs or undercuts before bisque firing the mold. A stiff bristle brush helps soften any unattractive or harsh features. I bisque fire the bowl mold only to cone 06–08 so that the clay remains porous and will absorb moisture from the pressed clay slab. Next, center the mold on a bat on the wheel head upside down with the carved dome facing up. Tip: I’m terribly inept at centering pots, so I often cheat by first drawing concentric circles on my bat while it’s spinning, and use these lines to help me position my mold. 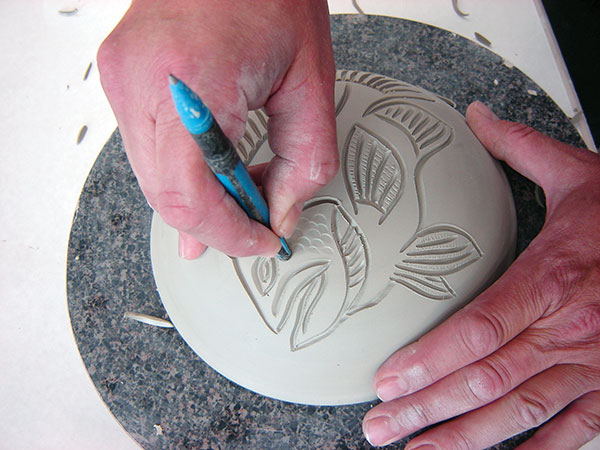 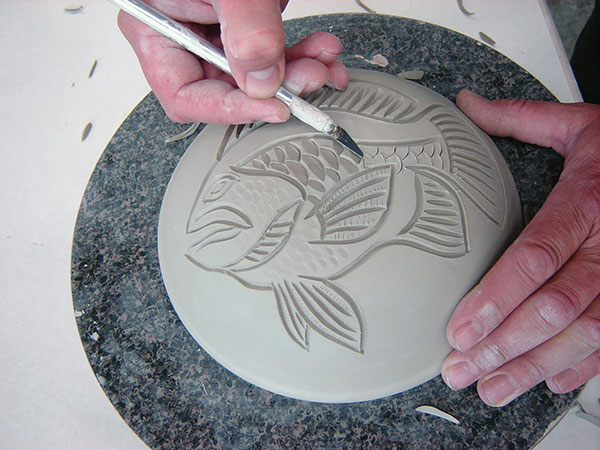 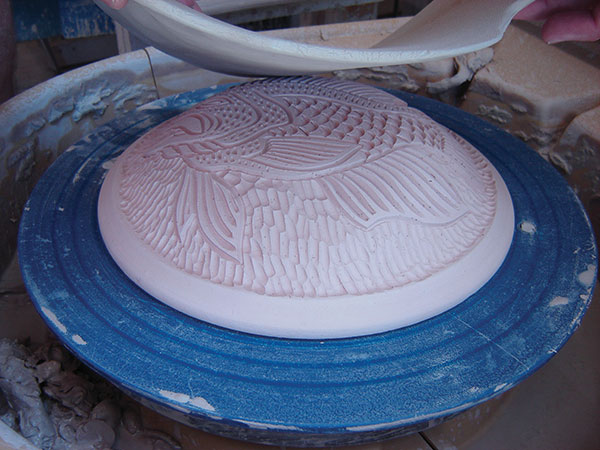 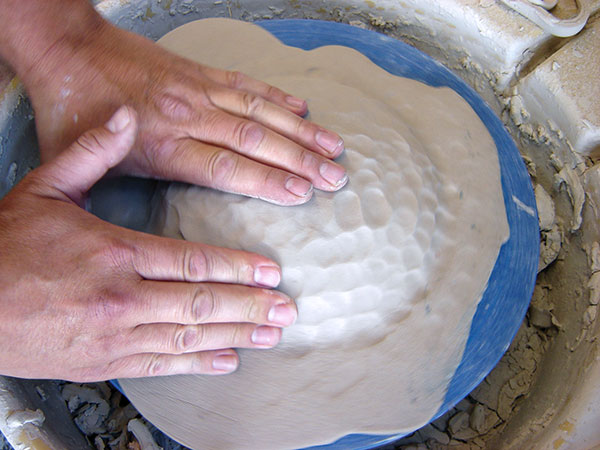 Roll out a soft slab to ¼–½ inch thick (depending on how heavy you want the bowl to be), smoothing out any blemishes or canvas texture with a damp sponge or rubber rib, and very carefully place it on the mold (7). Be careful not to move the mold while placing the slab. A flat slab doesn’t like to bend over a bowl, and this next step takes some practice (just accept that the first few attempts may look weird). Press the clay onto the mold, starting at the center and working down to the wheel head. Work in a spiral motion, moving the wheel head (by hand, don’t turn the wheel on) until the slab is firmly fastened to the mold, and the excess of the slab is pressed firmly to the bat. Make sure there are several inches of slab stuck to the bat; this will secure the mold to the wheel head when the wheel is finally turned on. Pressing the slab onto the mold correctly is important. Use fingertips to work the clay into the detail of the mold (8), while being careful to not move the slab once it has already been pressed into the texture. Any movement of the slab will create a tracer image (similar to a repeated pattern) effect. As I mentioned above, it takes some practice, so don’t be discouraged if your first few tries are less than satisfactory. Turn on the wheel to slow to medium speed, and use a sponge to compress the slab against the mold. Next, trim away some of the excess slab (9), leaving at least 2–3 inches. Make sure there is enough slab to cling to the plastic bat, so it doesn’t fly off the wheel.

Next, with the wheel on, compress the clay again with a damp sponge while creating a wheel-thrown effect on the outside of the bowl (10). Next, press a small ball of clay firmly to the top of the dome (11), and throw a foot on the bottom of the bowl—center, compress, and open up the ball to the desired foot width, and then shape the foot (12).

When the foot is finished, trim the excess slab to about ¼ inch away from the rim of the bisque mold (13), and compress this clay into a nice rounded edge above where the clay meets the bat. Then, take a straight needle tool and, holding it flat against the bat surface, press inward until the needle tool can be felt dragging on the bisque mold. I make sure my wheel isn’t going too fast—this is another great opportunity for your bowl to fly off of the wheel.

Now, take a small piece of plywood and set it on the foot. I disconnect the bat from the wheel head, place my hand flat on the plywood, then flip over the sandwiched bowl and mold as a unit. 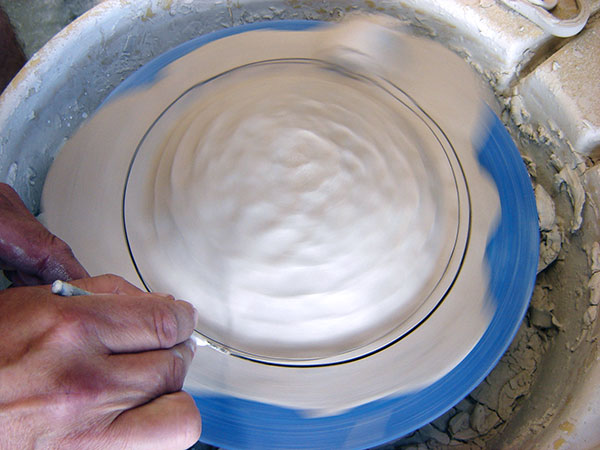 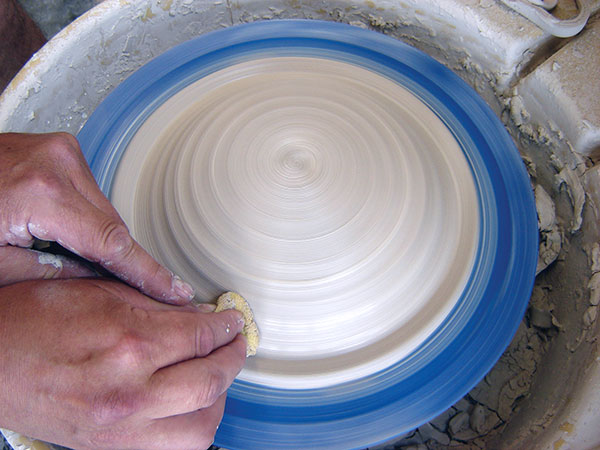 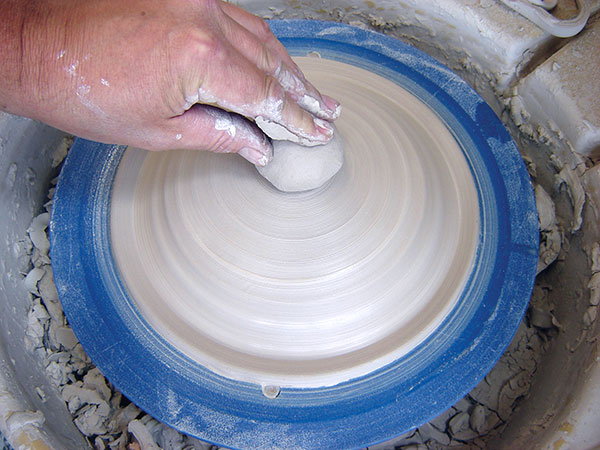 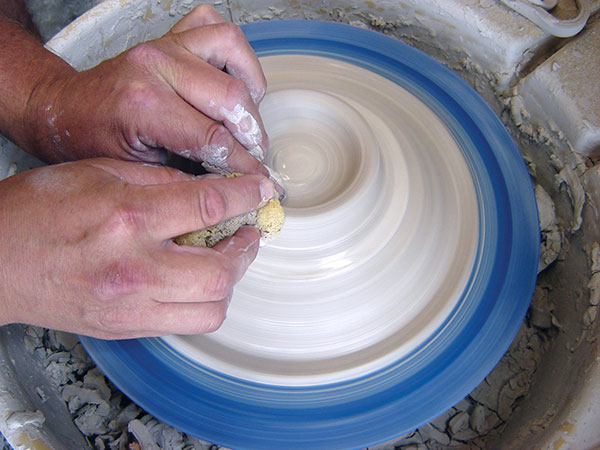 It’s important to clean up the rim of the bowl while it’s still in the mold in order to help prevent warping later. Smooth the rim with a damp sponge, and then take an X-Acto knife and carefully trim a strip of clay along the inner edge of the rim, where the clay touches the bisque mold (14). This isn’t always necessary, but I’ve found that if the bisque mold has a rounded edge, it sometimes creates an undercut and inner rim that must be trimmed in order to remove the bowl.

Next, remove the bowl from the bisque mold. This is where that handle attached in the beginning comes in handy (15)—the first couple of bowl molds I made didn’t have handles, and they were difficult to remove. If you do forget to put a handle on your mold, you can glue a wooden block or some other knob to the bisque mold. If you have difficulty removing a bowl from the mold, sometimes a puff of compressed air around the seam where the clay meets the bisque will remove the pot (I use an air nozzle attachment and less than 30 pounds of pressure). 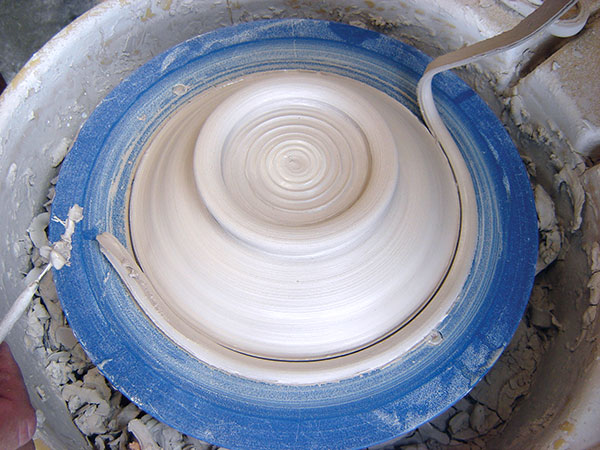 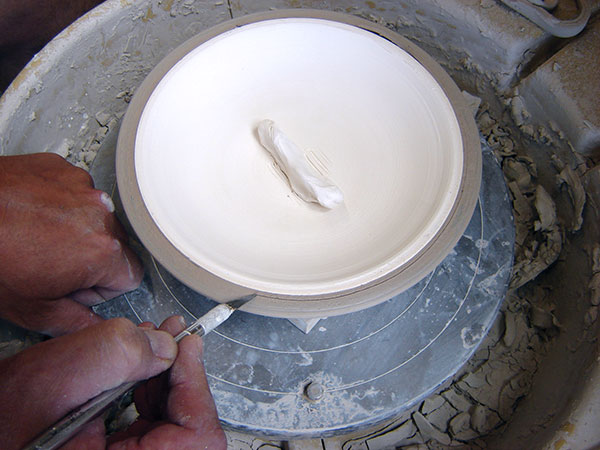 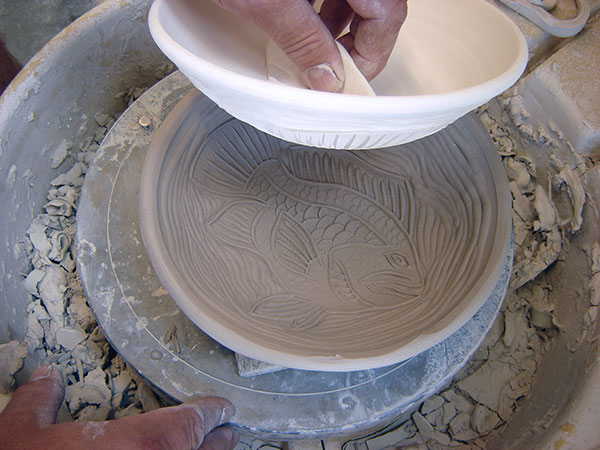 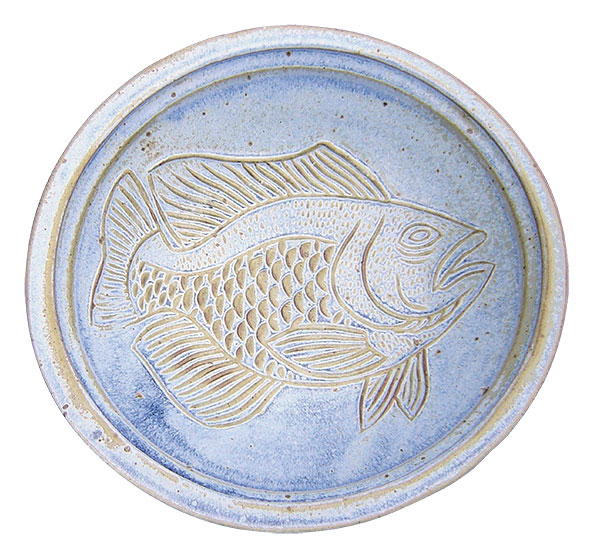 There will probably still be opportunities for cleanup after the bowl is removed from the mold. Be careful to wait until the bowl is a firm leather hard before smoothing or cleaning with a damp sponge. Usually I’m only able to make 2–3 bowls in a row with a mold before it’s too wet to make any more.

These bowls will never be as symmetrical as entirely wheel-thrown pots, but I’ve found they hold up in a firing with very little warping, even at high temperatures (cone 10 and higher). The key is to thoroughly compress the clay onto the mold, do all of the cleanup while the bowl is securely attached to the mold, and then make sure the bowl isn’t handled until it’s past leather hard or completely dry.

David Scott Smith is an assistant professor of ceramics at Salisbury University, in Salisbury, Maryland. He is the co-owner of Little Lane Pottery with his wife, Paula, who is also a potter. To see more of his work, visit https://davidscottsmithceramics.com or on Facebook @littlelanepottery.