A Thanksgiving Tradition: A Food Recipe and a Clay Project Pie poodles prevent the bubbling juices from boiling over the pie's crust onto the oven floor Craig Hinshaw I’m a pie maker/baker, usually making at least one pie a week. With my double-crusted pies, I use a pie bird so that I don’t need to cut vents in the top crust. Pie birds are hollow ceramic birds with an open beak. During baking, a pie bird allows the steam to funnel through it and out the beak, preventing the bubbling juices from boiling over onto the oven floor.

I bake my pies in a pie plate I’ve made, but have always used a commercially made, slip-cast pie bird. Now, I thought, was a good time to make my own, except mine would be a pie poodle. Poodles was the childhood nickname my parents called me, which I detested. Now, 65 years later, my siblings occasionally call me Poodles, a term of endearment.

Studying my collection of vintage and contemporary pie birds, I could see they were slip cast using a two-part mold. I began with a poodle sketch that was both playful and functional. From the sketch, I made a clay model remembering that the bottom of a pie bird needs to be raised or arched. This allows the hot steam to flow into the pie bird and out through the open beak. My model had more undercuts than those in my pie-bird collection and would necessitate a three-part mold.

I attached the model onto a slab of clay to ensure plaster would not flow beneath it. The base needed to be open as this is where the casting slip would be poured. With a needle tool, I lightly drew where the seam lines would be on the clay model to create a three-part mold.

Using scissors, I cut thin brass shims, about 1 inch wide, and pushed them into the lines on the clay model (1). On each seam, I folded one V-shaped shim, creating an interlocking mechanism. Separating the sections with the shims allowed me to cast all three parts of the mold at the same time. 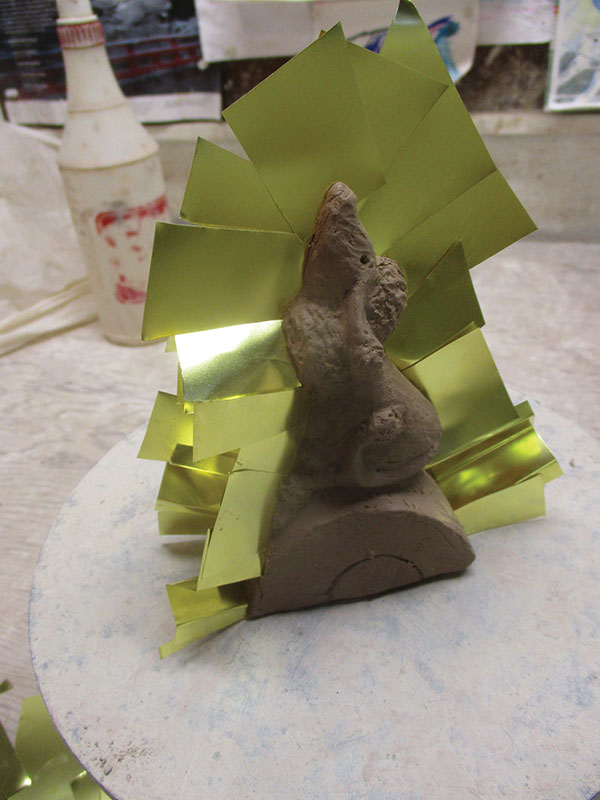 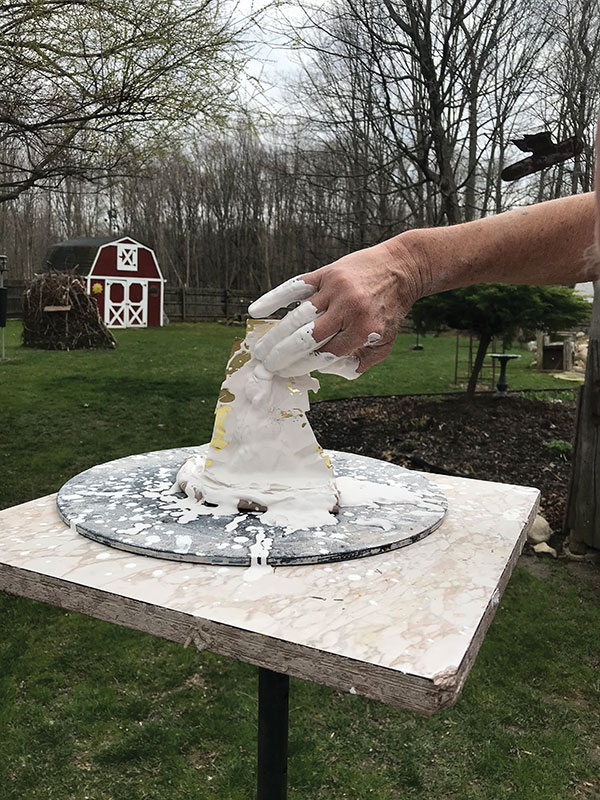 I mixed and then applied the plaster in three coats. The first coat of fluid plaster was flicked on by hand, forcing the plaster into all the small details. On the second (2) and third coats, I allowed the plaster to begin to set (firm up) before applying it over the first coat. These two coats were smoothed on, building up the thickness of the mold to the edges of the shims, but not going over them.

After the plaster set, I used pliers to pull out the shims (3). A putty knife placed in the spaces left by the shims helped to gently pry the mold open so I could remove the clay model. After cutting away rough edges of the plaster with a knife and gently rinsing the mold parts, I allowed the mold to dry. Note: Do not expose the plaster mold to high heat as it starts to calcine above 266°F (130°C) and the mold could degrade.4 After refining the mold and allowing it to dry, reassemble and secure it, then pour in casting slip. 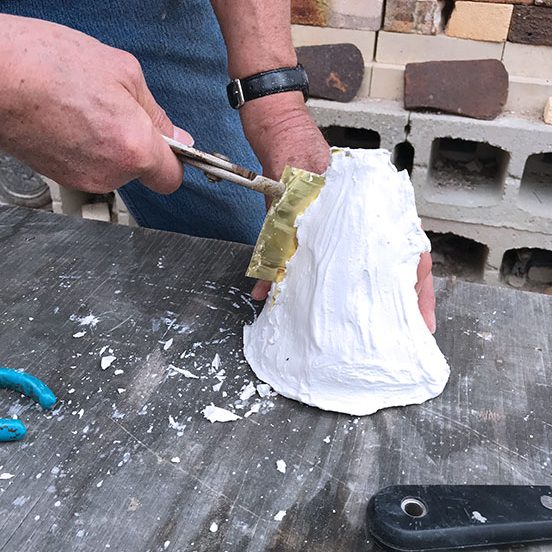 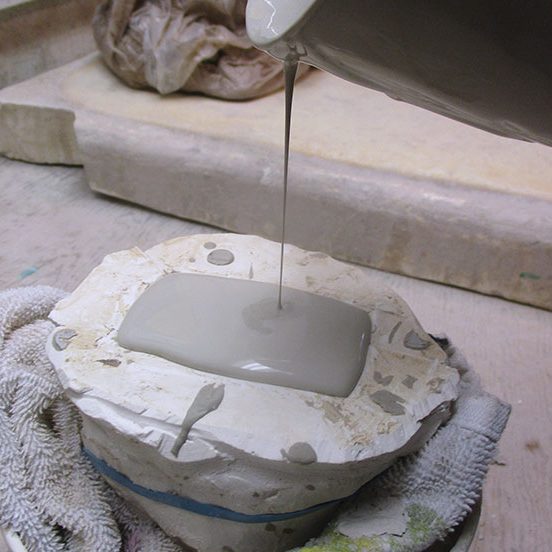 Casting and Finishing the Pie Poodles

For casting, I reassembled the three parts of the dried mold and secured them with two heavy-duty rubber bands. After inverting the mold in a plastic bucket lined with a towel to hold it in place, I poured casting slip into the top of the mold plus a little more (4), then added extra slip from time to time to compensate for the mold’s absorption. I used a high-fire, white casting slip from Mayco. I felt high-fire would be better for baking and the dishwasher. 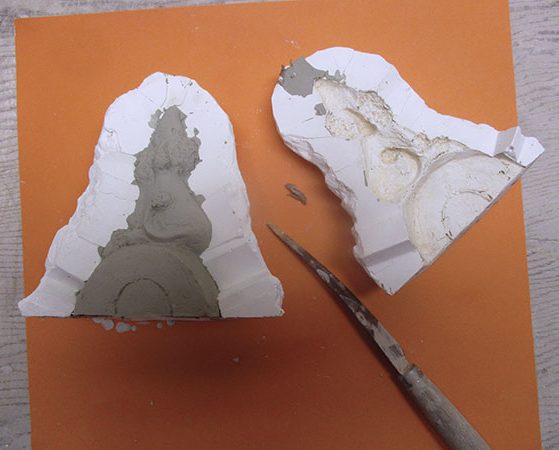 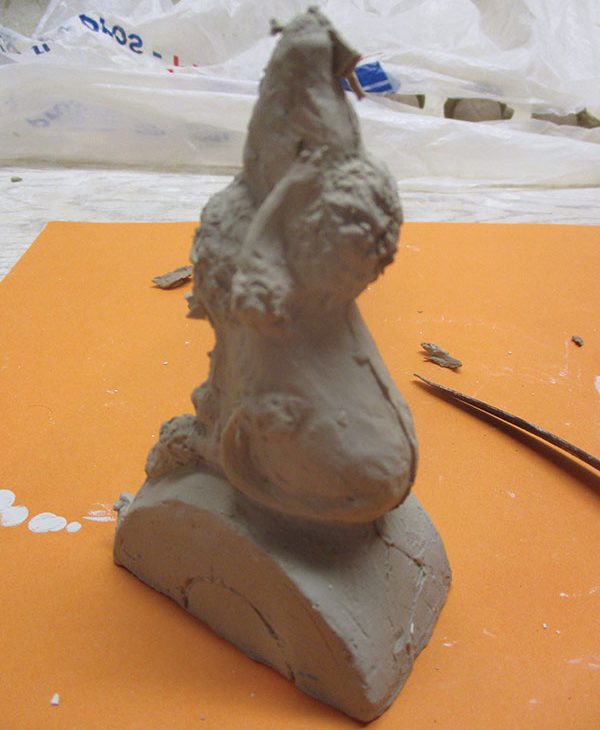 After 15 minutes, I poured the slip out of the mold and placed the mold upside down on two wood slats while it dried for three hours. The extra overflow slip that had partially dried was trimmed away using an X-Acto knife, the rubber bands were removed, and the mold carefully opened (5).

At this stage, the clay is leather hard and a needle tool and an X-Acto knife are effective for trimming the seam lines (6). Next, I used a 3/32-inch drill bit to drill a hole through the mouth into the hollow body. I then bisque fired, decorated, and glaze fired the pie poodle (7). Both the outside and the inside of the pie bird are glazed. The inside glazing makes for easier cleaning of baked-on pie filling. 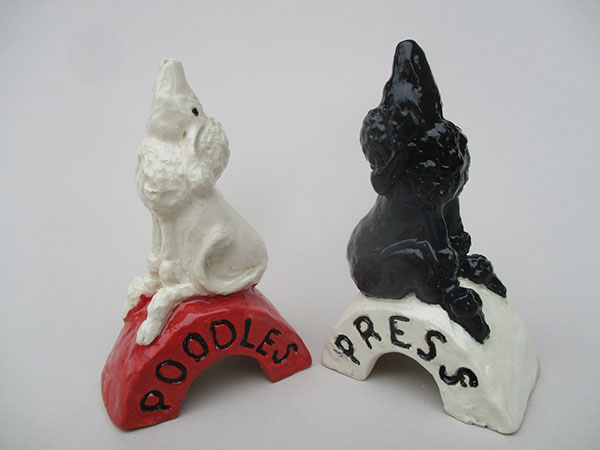 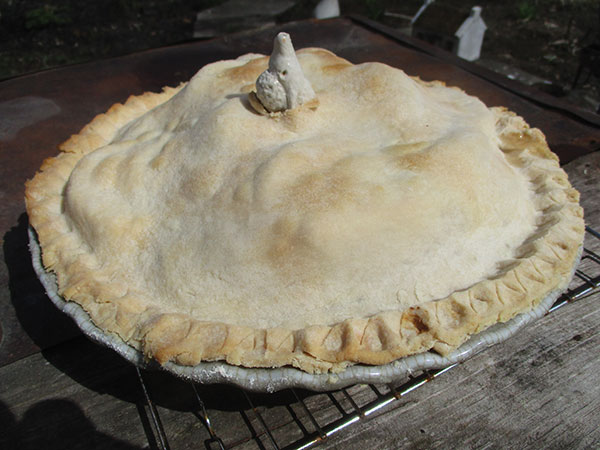 How To Use a Pie Bird

When baking a pie, place the pie bird in the center on the bottom pastry/crust. Add the fruit to surround the bird. Roll out the top pastry/crust and cut a small X in the center. Lay this crust over the pie with the beak protruding through the X. Pinch the pastry next to the bird. The pie bird prevents a soggy bottom crust by allowing steam to escape, supports the top crust, and is more fun than cutting slits in the top crust.

Now for the moment of truth. Poodles are known for their intelligence and my dog seemed to intuitively know how to be a pie dog (8), helping to create as good an apple pie as I’ve ever eaten! 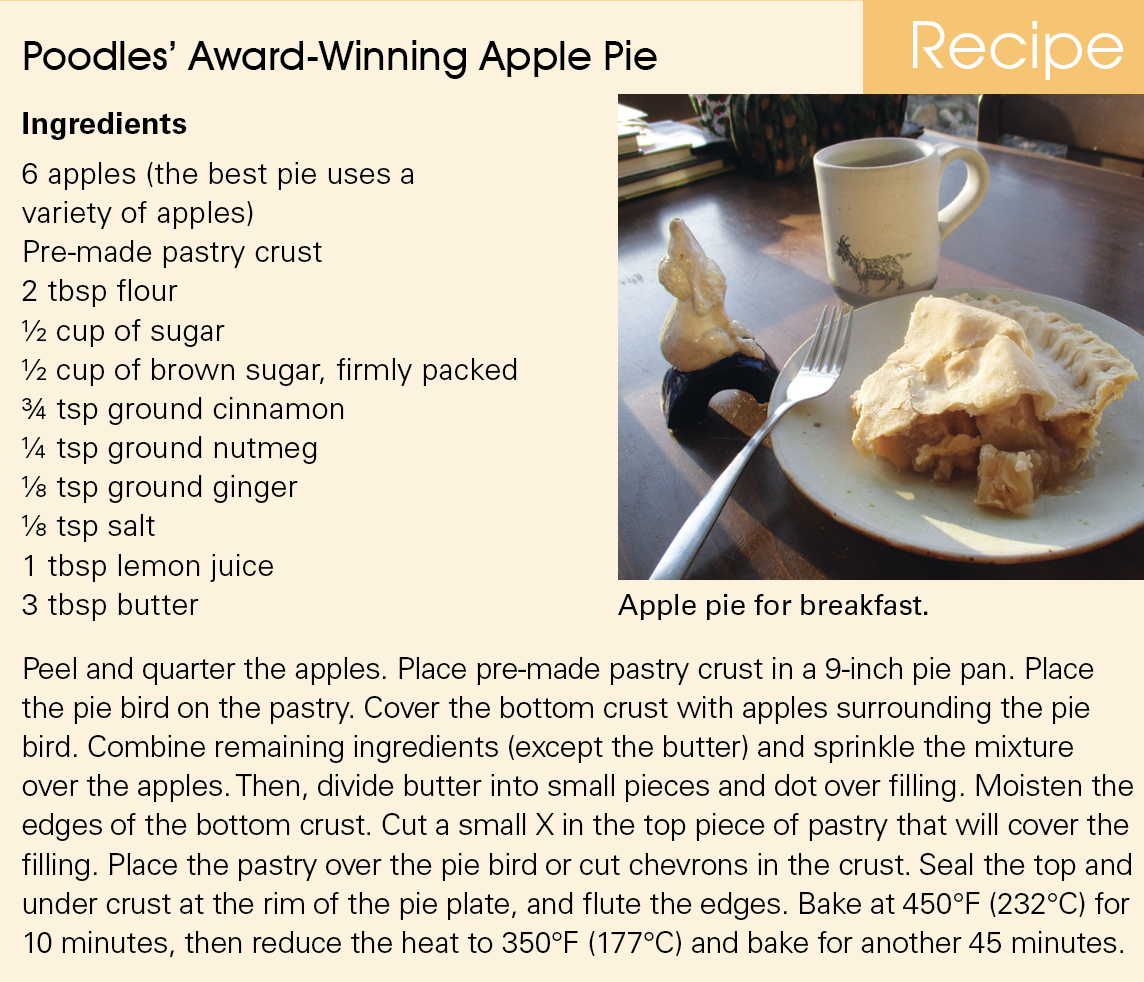 Craig Hinshaw is an artist and instructor living in Davison, Michigan. He is the author of Clay Connections, a ceramics book based on the articles he wrote for Pottery Making Illustrated. Learn more at www.craighinshaw.com.