Neriage and Nerikomi Explained Learn how to make beautiful colored clay surfaces with the neriage and nerikomi techniques! Robin Hopper 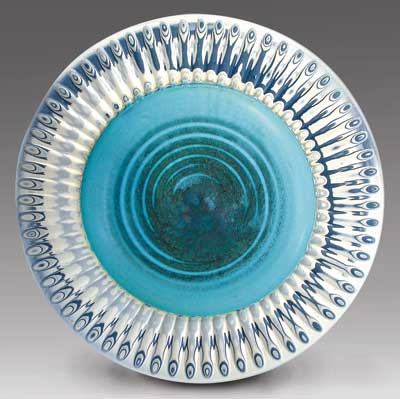 In Japan, the words "neriage," "nerikomi," and "zougan" are all used for specific colored clay processes and there is some confusion as to which is which. In England they are often referred to as"agateware;" in Italy they're often referred to as "millefiori," from a decorative glass-forming process meaning "a thousand flowers."

Today's excerpt from the late Robin Hopper's book Making Marks, clears up any confusion surrounding the terms. It also shows how to create a lovely fluted marble-rimmed bowl like the one shown here. - Jennifer Poellot Harnetty, editor

In Japan the words neriage (pronounced nair-ee-ah-gee), nerikomi and zougan refer to different ways the colored clays are used. Always interested in why things are called what they are and the confusion surrounding names, I asked Thomas Hoadley, a long-time artist working with colored clays, about the Japanese names. 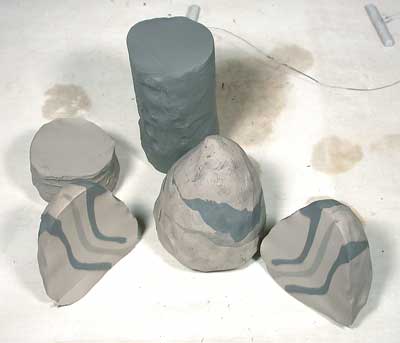 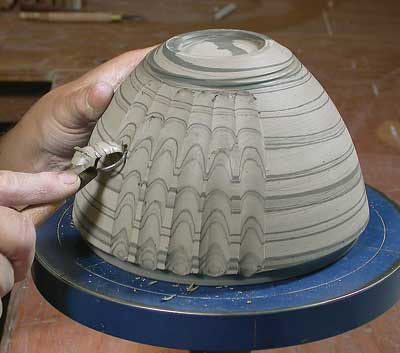 Hoadley told me, "When I became aware that colored clay work would be my primary life's work, I figured I should get to the bottom of the nerikomi/neriage question. I had been told that even in Japan the terms are mixed up. I spoke to a Japanese woman who lives here, and she explained that neri is a root word meaning "to mix" and age is a root word meaning to "pull up."

This refers to the pulling up action in throwing clay on a wheel, hence neriage refers to wheel work with colored clays. Komi means "to press into," as in pressing clay slabs into a mold. Nerikomi thus means hand-building with colored clay, which in Japan I guess usually meant mold work. It has been expanded to include other methods of hand-building."

Neriage and nerikomi both use either naturally occurring colored clays or light-colored clays that are specifically stained to satisfy the artist's color requirement. Neriage, or agateware, is done by laminating different colored clays together and throwing them on a wheel to develop a swirling and spiraling blend of the clays.

Objects made this way can be left with the swirl pattern, or altered by various forms of cutting the surface, with fluting and faceting. Balls of laminated clays are best left covered in a plastic sheet so amelioration can take place.

Cutting across the grain of laminated clays will expose an infinite variety of random patterns. The type of pattern can be controlled both by the thickness of the layers and by how the laminations are placed when thrown on the wheel. If they are vertical to the wheelhead, they likely will produce fine, lacy patterns. If they are placed horizontally, much bolder patterns can be expected. If placed diagonally, a combination of both bold and lacy patterns might be expected. 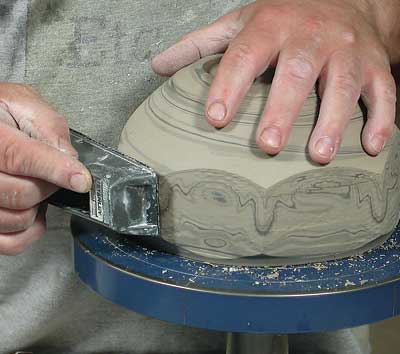 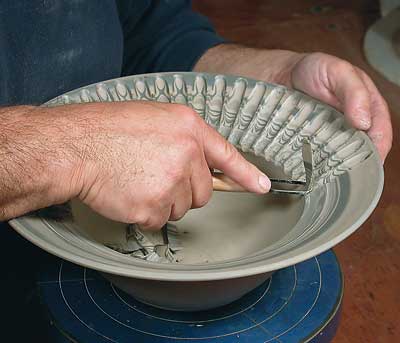 A chance happening while on a country walk [was the inspiration for the bowl shown at the top of the page]. I was walking around a local lagoon, the wind was blowing ripples across the open water, and there were tree branch reflections in the ripples, giving an agitated appearance. I immediately wondered how I might achieve such an image in clay, and the nearest thing that I could think of was fluted agateware, but I didn't want the whole object to be agatized, just the wide, flat outer rim of the plate or bowl. So I decided to make it in two parts.

The final form of the bowl is similar to the shapes of some decorated baskets and woven spruce root hats of the indigenous Haida nation of the Canadian Pacific Northwest. The patterns of the fluted agateware often suggest the patterns found on feathers, hence the name "Wide Feather Basket Bowl."

The central porcelain bowl has no color in the clay. I threw it relatively thickly and left it to stiffen to leather-hard. Then I used colored clays to make a thrown cylindrical collar with no base that was the width of the bowl. This was inverted on the lower part, carefully joined, and, with the wheel going very slowly, pulled out almost horizontally. When it had stiffened, I trimmed the piece on a chuck made to fit the inside of the bowl. After trimming, when the colored clay section also had stiffened, I fluted it with wire-ended tools.

When the piece was bone dry, I sanded off all the rough edges and bisque fired it. I glazed only in the center and fired in oxidation to cone 8. After firing, wet and dry silicon carbide paper was used to carefully sand the whole of the unglazed areas until they were as smooth as an eggshell.