To Simon Levin, there is a science to every part of wood firing, including what goes into a wadding recipe and how wadding is used in the loading and firing process. So he put together an overview of wadding based on his own experience and the experiences of other wood firing potters.

In this post, Simon talks about the various types of wadding and what you can expect if you use each one. Plus, he gives you the wadding recipes. –Jennifer Poellot Harnetty, editor

As artists who wood fire, we are more observers of phenomena than scientists who quantify and measure. We hedge our bets. We try to repeat effects while remaining open to serendipity. We have chosen a process fraught with uncontrollable variables. Our kilns are not commercially produced within exacting specifications. Our fuel source, wood, varies widely in silica, water, mineral, and alkali content, as well as species, and density. Among some of the other variables are clay bodies, loading techniques, firing range and duration, and weather and atmosphere. We struggle to test hypotheses because it is hard to control all variables and repeat firings. So rather than trying to present hard facts, this article sources information, observations, and theories from experts and innovators in the field—don’t be surprised if some of them contradict each other.

Wadding is a core material to all artists who fire their work in wood kilns. Wadding is the refractory material used to keep a pot from sticking to the shelf when ash melts or to keep two pots from sticking together. It is central to the process, and like most fundamental things, there are numerous complex approaches and competing theories as to what works the best. None of them are simple. There are three basic categories of wadding: fire-clay wadding, alumina wadding, and calcium wadding. All are engineered to prevent adherence to the pot, and all happen to leave distinctive marks. Fireclay and alumina wadding are made to be highly refractory, to avoid any fluxing and thus fusing with surfaces of contact. Some are also made to crumble easily after firing, allowing for easy removal. Calcium wadding is designed to dissolve and wash away after the firing.

This type of wadding seems to predominate in schools and atmospheric firings where salt or soda is introduced to the kiln’s atmosphere. The recipe is basically a thick kiln wash, and consists of 50% kaolin and 50% alumina hydrate. There are some variations though.

Linda Christianson uses a ratio of 4 parts alumina, 1 part EPK kaolin, and 1 part old flour. The low-clay content keeps the alumina from fusing together, while the flour is an inexpensive organic material that burns away. She freezes the leftover wadding between firings so the flour won’t rot. She notes that the downside of this wadding is the expense of alumina hydrate and the white marks it leaves on the surface.

Kenyon Hansen, who introduces soda into his firings between cone 9 and 11 in order to erode his glazes and glassify the clay bodies, uses the 50/50 alumina/kaolin wadding recipe. In an effort to reduce the white wadding marks, he makes his wads as small and hard as possible; this reduces the surface area contact while still lifting the pots off the shelf.

Almost everyone I spoke with who used alumina hydrate wadding was looking for an alternative, either due to the white marks it can leave or the cost of the material. Pete Pinnell suggests that the white residue is caused by alumina imbedded in the surface of the clay, with (perhaps) some migration of alumina ions during the firing. Alumina hydrate works well; it has a high melting point and tends not to fuse to either the pottery or the shelf. I found a pretty firm belief in the infallibility of the material. Thus, those who use it seem to see the white marks as a necessary evil, unwilling to try something else that might be a risk.

This type of wadding developed from the long history of potters using seashells to prevent adherence. The beauty of this method is that the shells (which are made of calcium compounds), once calcined from the firing, will slowly turn to dust as they gather moisture from the air. Calcining is a process in which a material is heated below its melting temperature to cause thermal decomposition, remove organic material or induce a phase transition. When calcium carbonate (CaCO3) is fired hot enough, the carbon dioxide is driven off and what’s left is calcium oxide (quick lime or CaO). When the quick lime combines with moisture, either in the air or by saturating the lime with water, the CaO and H2O combine to make calcium hydroxide. Soaking pots in water will expedite this process and dissolve any stuck pieces of shell.

The majority of the calcium carbonate won’t fuse to clay. Calcium oxide had a melting temperature of 4735 °F. Some of the CaO is certainly fusing with the clay and/or glaze, as CaO migrates easily in a firing, however, any CaO that “sticks” would do so by being chemically combined with portions of the clay/glaze, so it won’t be easily visible. Any unreacted CaO on the surface would tend to react with H2O and come off. Because this material washes away, it can be used in contact with glazes, leaving a scar on the surface, but not additional material. Seashells, as opposed to fresh water shells, also contain some salt, which volatilizes and fumes locally, glazing and corroding any clays or glazes in the immediate area.

When work is re-fired, it must be re-wadded in the same manner as the first time it was fired. This is because all the other surfaces have ash deposits, which will become a glaze and fuse newer wads in place. Often re-wadding is impractical, in which case seashells or calcium wadding opens new possibilities. Although they leave a small scar on ash-covered area, the residue dissolves away after the firing.

Perhaps because of the land-locked nature of a lot of wood-firers, innovative potters have been making their own shells. Using a mixture of half whiting (calcium carbonate), and half plaster of Paris, shapes can be cast and saved until it’s time to fire. A shell can be repeatedly pressed into a slab of clay making the recesses for the plaster casts. Tripods can also be cast using this mixture. The pointed tips of the tripod reduce the contact area with the pot. Ted Adler has been using a plaster and whiting mixture as wadding for about 10 years. In graduate school he tried using just plaster, but found that it was too hard and fused to the pots. Plaster of Paris has a melting temperature of 2200°F (1200°C), so at cone 9 the plaster fluxes and melts into the surrounding clay and shelf. By mixing plaster half and half with whiting it raises the melting temperature and makes it release easier and dissolve faster (2–3).

My neighbor, Gareth Sturms uses thin cross sections of cow bones in place of wadding. He pays a certain price with some unpleasant hours with a bandsaw. Fireclay wadding: When I was in graduate school, visiting artist Kirk Mangus shared his wadding recipe: equal parts silica sand, grog, sawdust, and fireclay. The benefit of this type of wadding is that the mark it leaves is the bare clay color. The fireclay wadding acts as a resist, protecting the area underneath from ash accumulation. It leaves no residue, resulting in reactive clay colors in areas of contact. Years later, in my own pottery, I removed the grog from the recipe because of the cost and I have used this recipe for 15 years. 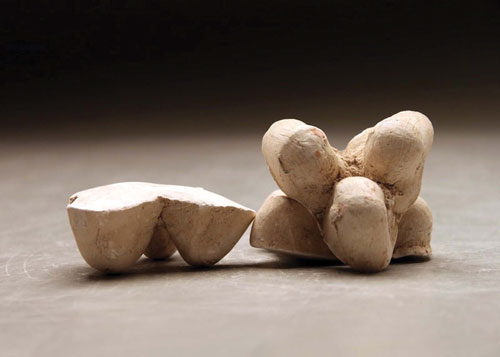 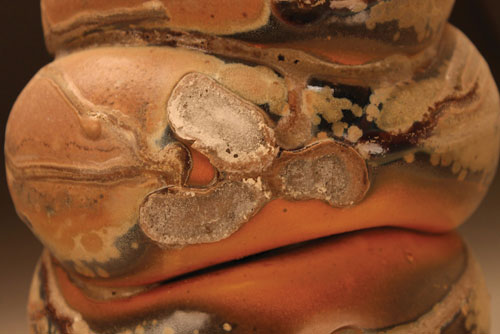 The idea behind adding sawdust, flour, rice hulls, or other combustibles to the wadding is simple and seemingly sound. Soft brick is easier to crumble than hard brick, if you can make wadding that contains voids when fired, it will be easier to remove than denser materials. I have accepted this principle, but John Neely disagrees, “So often, people fill wadding up with organic material to make it more friable. I think just the opposite happens; unless it is a really dry firing, the gaps left by the organic material cause the wadding to absorb ash like a sponge.” Instead, John looks for larger-particle, round silica sand, like contractor’s 30 mesh or larger. He mixes the sand and water in a bucket and uses just enough clay to hold it together.

Simon Levin is a wood-fire potter from Gresham, Wisconsin who dislikes writing about himself in the third person. He evangelizes for wood-firing everywhere, is a Fulbright Scholar, kiln builder, and writer, but foremost he loves making pottery and big hot fires. You can see more of his work at SimonLevin.com.