Carving geometric patterns into pottery can be a challenge. Aside from sharp tools and patience, you need to know the optimum timing and plan your design carefully in advance to do it well.

Once the pot becomes leather hard, I draw patterns and motifs on the surface. After placing the pot on a flat surface, a guiding vertical line is drawn between the rim and bottom using a soft 8B drawing pencil and a clear flexible ruler. Starting at the guide line, the rim is then divided into twelve sections using a decorating disk (figure 1), and the bottom of the body is also measured into twelve with compass dividers (figure 2). Here is when more complicated design work starts. First I draw the vertical lines connecting the points at the rim and foot to separate the surface into six planes. 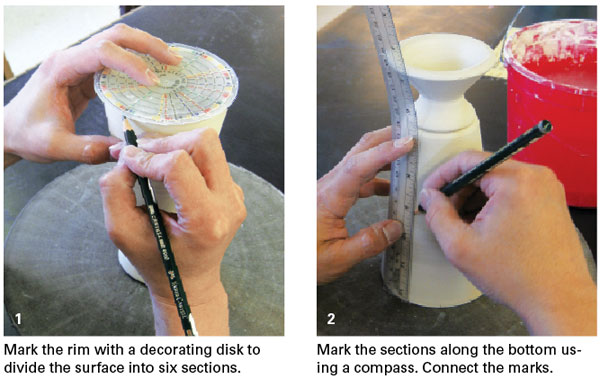 The scale of the repeating elements decreases as the diameter of the cup decreases. Continue to measure the incrementally smaller divisions between the vertical lines and marking this distance on the vertical line, starting at the rim and working down, and finishing when the dividers meet the bottom of the cup (figure 3). Once one section has been marked off, transfer the marks to the other vertical lines. This method for measuring is usually pretty close each time, but even if this drawing process is slightly off, I can adjust the distance as I connect the marks diagonally for diamond or weaving patterns (figure 4) or with concentric circles for waves.

For diamond patterns, once I reach the middle, I alternate the decorating panels to create open areas for variety (see figure 5). Carving and Finishing After I draw patterns on the surface, the piece is generally at the hard to leather-hard stage and it’s time to carve! Using small triangle-shaped trimming tools, I patiently carve out the surface one line at a time tracing the lines that I drew. Some straight lines, such as the window shapes, are carved without lines by using the width of the tool as a guide (figure 6). The diamond pattern is carved away to create a recess starting at the bottom point to about the vertical middle of each diamond, creating visual and physical depth (figure 7). After the entire surface is finished, carved edges are gently wiped down to eliminate any harsh edges. I use a damp, wedge-shaped cosmetic sponge because it’s extremely soft and smooth and doesn’t leave streaks like a throwing sponge (figure 8).

Once the carved lines have been softened, I go back and touch up the pattern for a second time until it achieves a desirable clarity of line and depth. Depending on the design and patterns, additional detailed carving and slip decoration are added afterward (figure 9). The secondary carving is done with a needle tool or the carving tool, but afterward I don’t smooth it with the cosmetic sponge, as I want to preserve the sharper edge. At this point, I may add dots and lines with a slip-trailing bottle filled with porcelain slip to add visual three-dimensionality and tactile communication back on to the surface (figure 10). I prefer to use a narrow tip and soft slip to have a delicate line quality and better control. After the pot is bisque fired to cone 06, I wipe down the entire form with a wet sponge to clean up all dust and unwanted marks then let it dry completely. Celadon glaze is applied in layers by dipping to create the depth into the crevices. To finish, the pot is fired in a gas kiln to cone 10 in a reduction atmosphere.

Yoshi Fujii is a resident artist and the gallery manager at Baltimore Clayworks in Baltimore, Maryland. He received a BFA from the University of Southern Mississippi and an MFA from Southern Illinois University Carbondale. More information about Yoshi is available at www.yoshifujii.com.