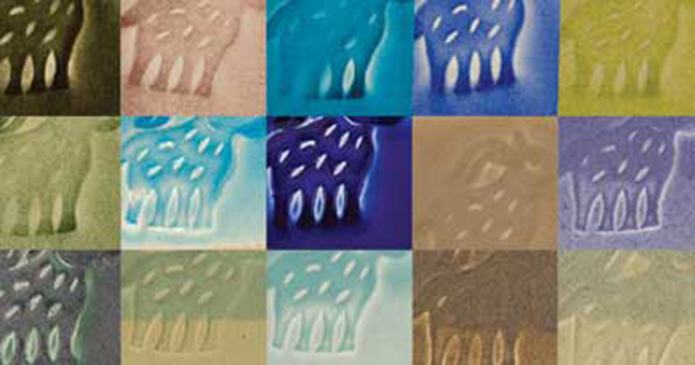 Whether you work with cone 5 glazes or do high fire reduction, there are so many variables involved in ceramic glazes. These include variations in firing schedules and differences in raw materials from place to place and from mine to mine. Because of these variables, the results are never guaranteed. So, it is important to test, test, test.

That's exactly what Yoko Sekino Bove did. She conducted extensive tests to determine how several base cone 5 glazes do with a wide variety of coloring oxides and carbonates. See her results in today's post.  - Jennifer Poellot Harnetty, editor. 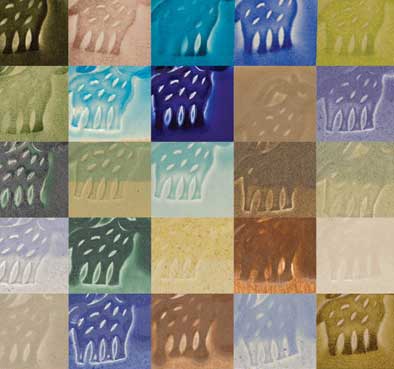 There are so many wonderful books, websites and even software that feature spectacular glaze formulas; so one may wonder why this article should be introduced to you. The focus of this research was to establish a comprehensive visual library for everyone. Rather than just providing the reader with a few promising cone 5 glaze formulas, this reference is a guideline. Because it is a guide, there are some test tiles that do not provide immediate use other than the suggestion of what to avoid, or the percentages of certain chemicals that exceed the safe food-serving level, etc., but I believe that this research will be a good tool for those who wish to experiment with, and push the boundaries of firing cone 5 glazes.

Many people may be thinking about switching from high-fire to mid-range cone 5 glazes. For instance, students who recently graduated and lost access to school gas kilns, people with a day job and those who work in their garage studios, or production potters who are concerned about fuel conservation and energy savings. This reference is intended as a tool for those people to start glaze experimentation at mid-range that can be accomplished with minimal resources.

There is no guarantee that this chart will work for everyone everywhere, since the variety between the different resources overwhelmingly affects the results, but by examining a few glazes in this chart you can speculate and make informed adjustments with your materials. This is why all the base cone 5 glazes for this research use only simple materials that are widely available in the US. 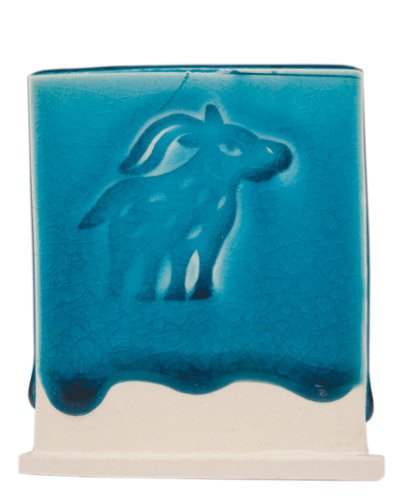 Five years ago, when I was forced to switch to mid-range oxidation firing with an electric kiln, from gas-fueled reduction firing at high temperatures, most of my hard-earned knowledge in high-fire glazes had to be re-examined. Much to my frustration, many earth metal colorants exhibited completely different behaviors in oxidation firing. Also, problems in adhesion were prominent compared to high-fire glazes. The role of oxides and carbonates used for texturing and opacifying were different as well. But compiling the available glazes and analyzing them were not enough. I felt there should be a simple chart with visual results that explained how the oxides and carbonates behave within this firing range. This motivated me to write a proposal for glaze mid-range research to the McKnight Foundation, which generously sponsors a three-month artist-in-residence program at the Northern Clay Center in Minneapolis, Minnesota.

Most of the tests presented in these experiments were executed at the Northern Clay Center from October to December in 2009 using clay and dry materials available at Continental Clay Co. The rest of the tests were completed after my residency at my home studio in Washington, Pennsylvania. For those tests, I used dry materials available from Standard Ceramics Supply Co. 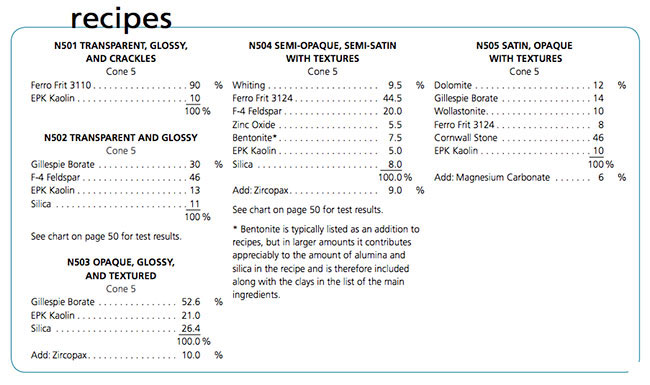 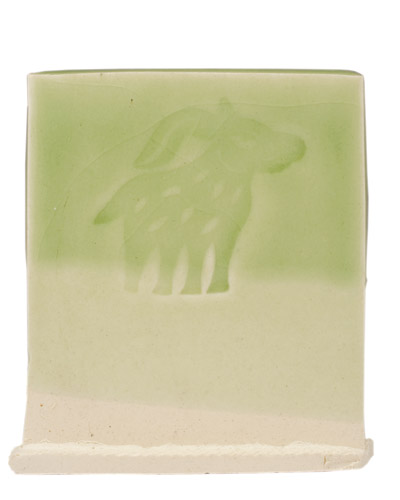 Glaze batch: Each test was 300g, with a tablespoon of epsom salts added as a flocculant.

The following colorants were tested: black nickel oxide, cobalt oxide, copper carbonate, chrome oxide, iron chromate, manganese dioxide, red iron oxide, rutile, and yellow ochre. You should note that tests with cobalt oxide and chrome oxide in high percentages were not executed due to the color predictability. Other blank tiles on the chart are because either the predictability or the percentages of oxides are too insignificant to affect the base glazes. 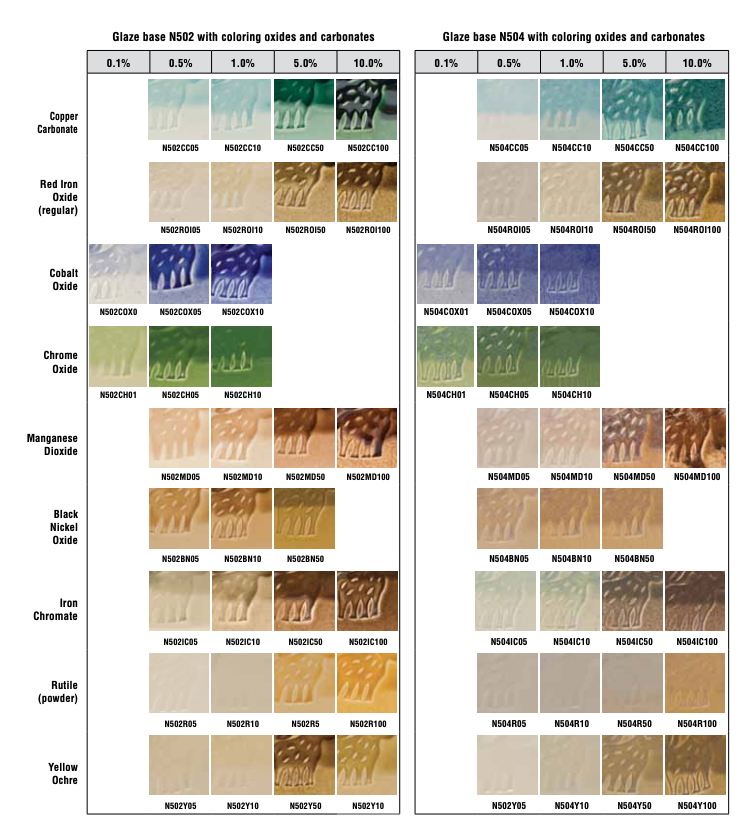 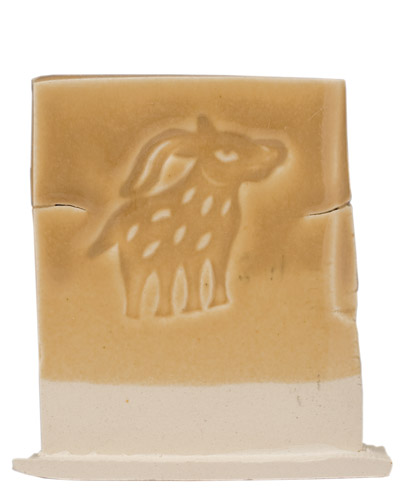 Depending on firing atmospheres, manganese dioxide exhibits a wide variety of colors. When fired in a tightly sealed electric kiln with small peepholes, the glaze color tends toward brown, compared to purple when fired in a kiln with many and/or large peepholes. Please note that some of the oxides and carbonates in this test exceed the safety standard for use as tableware that comes in contact with food. Check safety standards before applying a glaze with a high percentage of metal oxides to food ware and test the finished ware for leaching.

Test tile numbering system: The glaze name is the first part of the identification number, followed by an abbreviation or code that stands for the colorant name. The last part is a two or three digit number referring to the percentage of colorant added. So, for example if a test was mixed with glaze base N501, to which 1 percent cobalt oxide was added, the test tile marking would be: N501COX10. 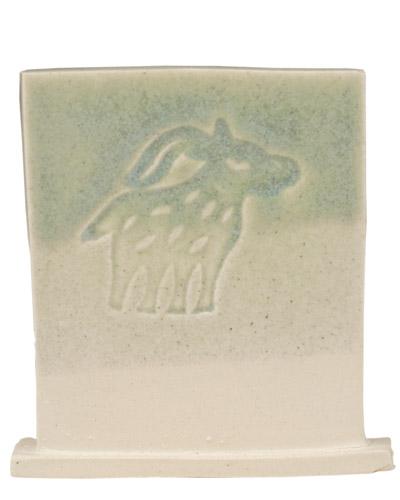 This group of tests has been a great opportunity for me to study the characteristics of oxides and carbonates and how they behave at mid-range temperatures. There are scientific methods for calculating glazes and proven theories, but there are many small pieces of information that can only be picked up when you actually go through the physical experiments. It is important for us to become familiar with a glaze’s behavior so that we can better utilize it. Key to that is learning both the theory and application. It is my hope that these tests will benefit many potters by helping them to expand their palette and inspire them to test the possibilities.

the author Yoko Sekino-Bové is an artist living in Washington, Pennsylvania. She would like to thank the McKnight Foundation and the Northern Clay Center and its supporting staff for making this research possible.