Who can resist a beautiful bright red glaze? But red is also one of the most difficult colors to achieve in ceramic glazes. But it may not be as tough as you thought—as long as you choose the right method for your work.

Chinese ceramic lore includes the tragic tale of a potter who became so frustrated with his many failures to produce a red glazed pot for his emperor that he finally threw himself into his kiln. When the kiln cooled and was opened, so the tale goes, the finest red glazes were found. Modern materials make it considerably easier to produce red glazes, although challenges remain. Knowing the chemistry and firing requirements of the types of red glazes will save you from throwing yourself into your kiln.

Stain—Essentially a frit made of colorant chemicals, compatible fluxes, and possibly glass formers, which has been melted, cooled, and pulverized to a fine powder.

Encapsulated Stain (Inclusion Pigments)—A new generation of stable stains made by melting metallic colorants with zirconium silicate, cooling the melt, and grinding the result to a fine powder. Because zirconium silicate is refractory, stains containing it can produce brighter colors up to cone 10 using pigments that would otherwise fade at high temperatures. These colors are safe to use in the studio.

Flux (molar) Unity or Seger Formula—The chemical composition, commonly of a fired glaze, expressed as one mole of total flux to the number of moles of all other ingredients in the glaze. The term ‘unity molecular formula’ does not specify whether the flux, alumina, or glass formers are in unity. Each can be at different times for different purposes, but flux unity is used almost universally by ceramic artists. 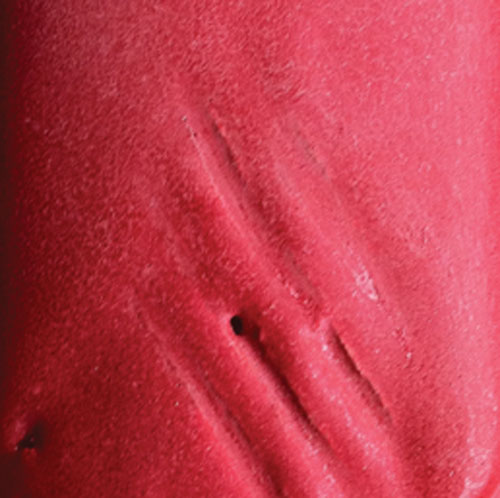 The easiest, most reliable path to red is to use relatively recently developed cadmium inclusion stains. These stains also contain selenium combined with sulfur, and they will produce the full range of colors in the red spectrum from yellow through orange to brilliant red. They work in both translucent and opaque glazes, in oxidation and reduction firings, and at all firing temperatures.

Historically, cadmium and selenium have produced glamorous red glazes but only at low temperatures. The colorants burned out at higher kiln temperatures and the resulting red glazes were pale. The discovery of the encapsulation process (the melting of the colorants into a zirconium silicate glass at high temperatures) has now made the many hues of yellow through red reliable at temperatures through cone 10 in both oxidation and reduction atmospheres. These stains are refractory at pottery temperatures and do not melt much, if at all. However, the manufacturers recommend that the stain not be ball milled.

Inclusion stains are suitable for use in a wide variety of base glazes. The amount of stain to use must be determined by testing, because the base glaze and application thickness will influence the fired results. Reds produced with these stains, while very reliable, tend to be flat and lack the variation produced when using oxides and/or atmospheric kilns 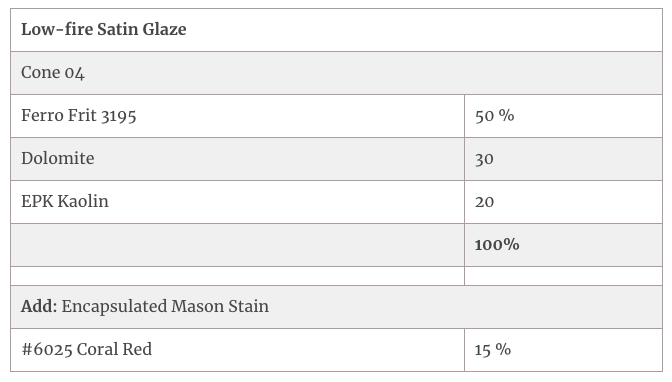 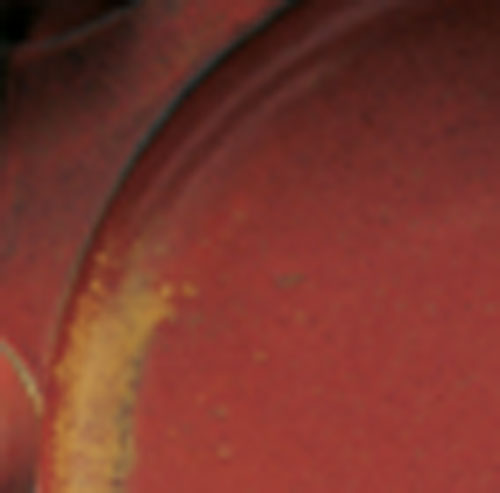 Iron red glazes often have vibrant names like Tomato Red or Ketchup Red, and they are generally warm reds. The true reds are produced in oxidation around cone 5. By cone 10, they tend to turn toward orange or persimmon. High-iron glazes fired in heavy reduction will turn maroon to black.

Iron reds are mainly iron saturated, which means they contain between 5 and 10% iron oxide in the glaze recipe (most recipes use 7% or more). Iron reds with bone ash (calcium phosphate) as a source of phosphorous (phosphorous in general causes opalescence and brighter colors) typically contain on the order of 10%.

Even considering the above specifications, there is wide variation in iron red recipes. Traditional persimmon or kaki recipes, for example, are very high in both alumina and silica but contain no phosphorous. 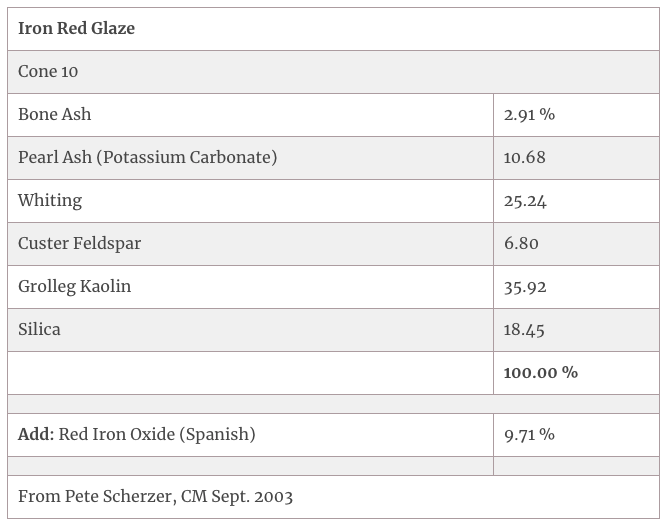 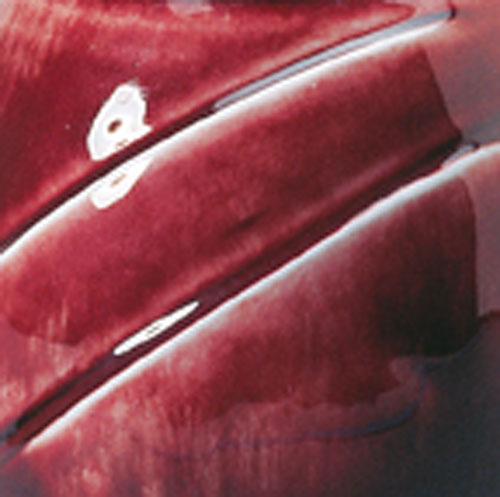 Copper reds are achieved between cones 5 and 11 by reducing the copper (either copper oxide or copper carbonate) in the glaze. Only a small quantity of copper is necessary for this; 0.25% copper carbonate is sufficient, though more is often used. The red color is aided by the presence of a limited amount of tin. Iron can also help produce a red color in copper red glazes, but too much iron will lead to muddy reds.

The various hues of copper red are influenced by the amount of alumina, magnesium, and boron present in the glaze. High alumina tends to produce cooler reds, as does magnesium, while high boron produces warmer reds.

Copper red glazes tend to be somewhat fluid, so glaze runs should be guarded against in glaze application. Boron particularly enhances the fluidity at cone 10. Where copper reds flow off of rims or high points, they tend to turn white.

Oxidation copper reds in electric kilns are achieved by mixing a reducing agent, silicon carbide, with the copper in the glaze. Because silicon carbide can be a source of glaze blisters and pinholing, its use presents its own set of problems in the studio.

Understanding and controlling the reduction atmosphere in a kiln to achieve copper reds is usually by far the most difficult part of working with this family of glazes. The glaze above is best if the kiln is placed in moderate reduction at cone 010 and held there until cone 9 drops. The kiln can then be soaked in oxidation until cone 10 is down. A smoky fire, as used with carbon trap glazes, is never necessary to achieve copper reds. In fact, a sooty atmosphere in the kiln is likely to produce gray, dingy copper reds due to carbon trapping 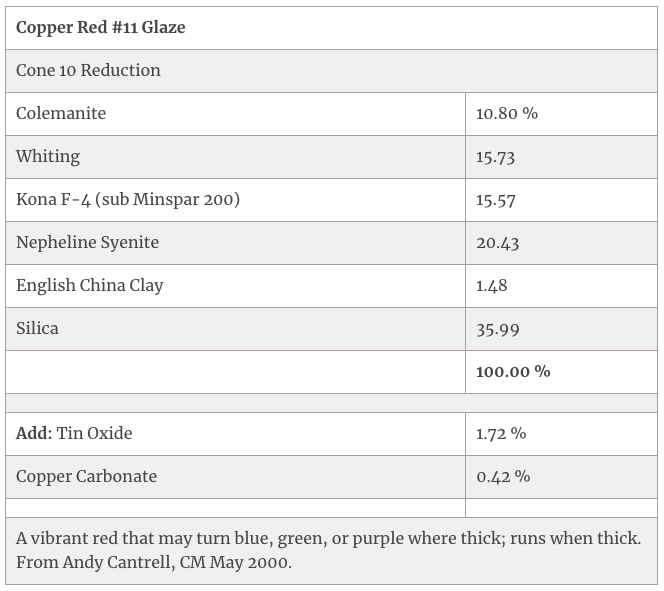 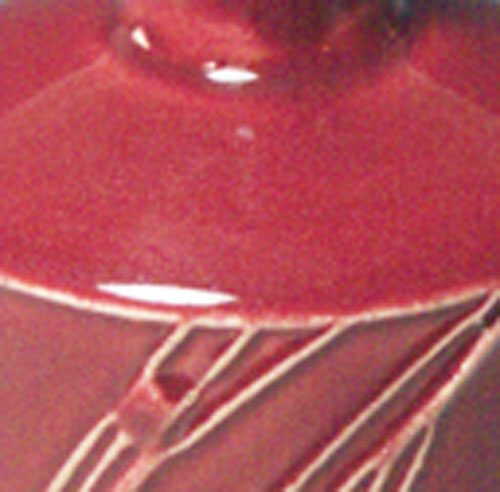 Chrome-tin pink glazes are, as their name implies, a combination of chrome and tin that produces somewhat cool reds from a light pink to a deep burgundy. The combination works well from low fire into the cone 6 range, but poorly above cone 9.

According to Cullen Parmelee in his book Ceramic Glazes, the glaze chemistry necessary is fairly specific: calcium is the most important flux because it gives the color a greater stability and a more fiery red color while sodium promotes yellow shades. Boron should be limited because it tends to shift the color toward purple. Additionally, if your base glaze contains barium, the color effects will be stronger in the absence of boron. Zinc should be avoided because chrome and zinc can interact to produce brown. High alumina works against the red. Because a glaze can dissolve some of the clay body, changing the alumina and flux content of the glaze, these glazes require careful testing.

A thin application of a chrome-tin glaze will tend toward gray rather than red. Close examination of the glaze with a magnifying glass will reveal the red is present in small islands within a matrix of clear glass. This explains why a thicker application will produce more vibrant red. Chrome-tin pinks can be produced more reliably from commercial stains than from the raw materials, but stains are not required to produce this red.

Chrome-tin pinks present special challenges when working at cone 5–6, because chrome (either from chrome green glazes or chrome-tin reds) can vaporize at the peak of the firing and give a pink blush to adjacent ware with white glazes containing tin. Since tin is occasionally used as an opacifier, this is not an uncommon occurrence. This can be especially problematic if working with commercial glazes where the full list of ingredients is not obvious 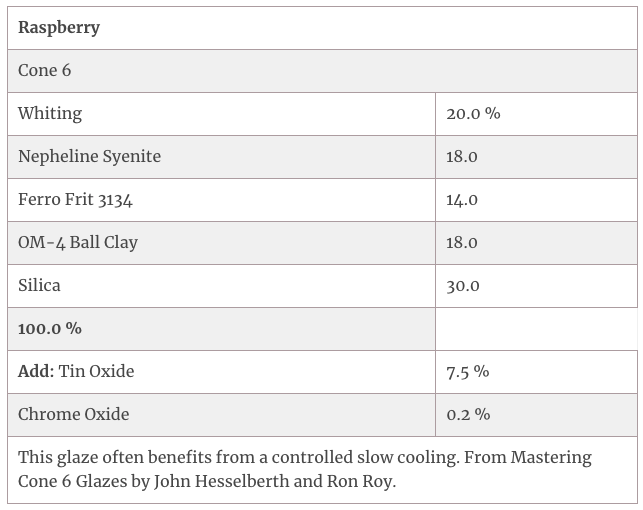