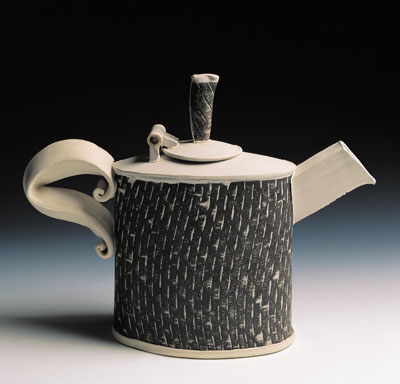 Stencils can be a very effective means of applying repetitive surface decoration to ceramic surfaces, especially for the drawing impaired (like me). Ivoryton, Connecticut, ceramic artist Hayne Bayless takes stenciling one step farther in his hand built pottery. He takes advantage of clay’s malleability to stretch and alter his stenciled design before constructing his pieces. Today, author Scott Ruescher describes the stenciling and stretching process as he observed it on a visit to Hayne’s pottery studio. Maybe it will inspire a new twist in your work! – Jennifer Poellot Harnetty, editor.

Hayne Bayless uses several found objects for stencils when it comes time to decorate his ceramic art. For the pitcher to the right, the lucky found object was a perforated sheet of plastic (what’s known in needlepoint circles as a canvas, though it’s anything but) for stenciling a slip pattern onto the slabs before building the piece. “You can make a stencil out of anything,” he claims, leafing through a selection of kitchen shelf liners and stiff crinolines long ago used to line petticoats so that they would billow like the dancing pitcher’s skirt. 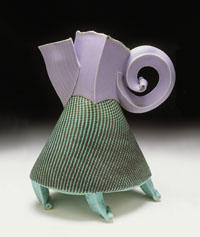 Bayless stencils an optically illusory, warped grid of black dots onto a rolled slab of clay. Affixing the needlepoint canvas to the slab, he seals the plastic firmly against the clay so that the slip or pigment he’ll apply to the perforations won’t leak between the dots and make the eventual asymmetry messy and obvious rather than neat and subtle. “I get lots of inspiration from Shang and Zhou Dynasty ritual bronzes and Jomon-period pots,” he notes.

After applying the pattern, he removes the stencil and flings the slab lengthwise along a clean worktable at an angle just steep enough to cause an interesting collision of the slab with the table.  Like a restless chef with a nice wad of kneaded dough that he doesn’t want to throw into the same old symmetrical pizza, Bayless undrapes the slab from the table to see what pattern he’s come up with, accidentally on purpose, as it were. He knows roughly what to expect from having done it before, and there it is: a pattern that faithfully takes the shape of the clay it not only adorns but of which it has become an integral part. The stenciled grid of dots has felt the impact, shifting in the direction of Bayless’ forceful fling; a poetic wave in the regimented grid. To see more images of Hayne Bayless’ functional pottery work, visit www.sidewaysstudio.com.