When Sam Chung stumbled across a book of Korean Cloud motifs, he decided to explore pairing them with traditional Korean pottery forms, and his cloud series was born.

In today's post, an excerpt from the Ceramics Monthly archive, Sam shares his wheel throwing and altering process, which results in pots that look like they are peering out from behind puffy clouds.- Jennifer Poellot Harnetty, editor

PS. Check out the November 2014 issue of Ceramics Monthly to see Sam's China Painting process, as well as his liner glaze recipe.

My current work is wheel-thrown porcelain, which is then cut, altered, and assembled from parts. The cloud shapes are lightly sketched onto the leather-hard-clay surface with a pointed, pencil-like tool.

This part is quite improvisational and one of the parts I enjoy most about the making process. Once the cloud contours are laid out, I cut into the wall of the pot along some of the contours and pull the cut portion of the clay wall away from the form so it projects away from the form (1). The resulting gap is filled with a slab piece that is trimmed until it fits the opening (2) and then attached (3). The seam against the pot is blended with a coil of soft clay (4).

This process is repeated throughout the form until the projecting contours are distributed around the pot. After the pot reaches a firm leather-hard stage, I refine the edges with a metal rib (5). 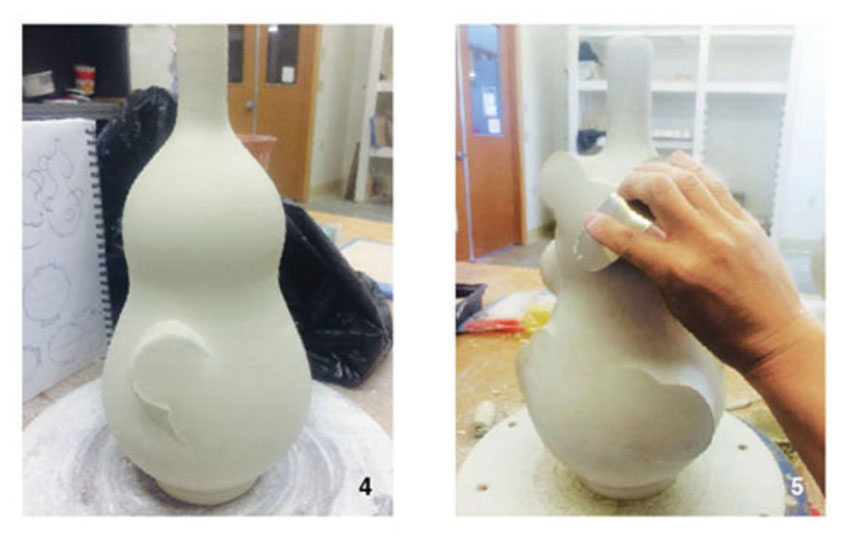 Once the pot is bone dry, I bisque fire the work to cone 06 and then line the inside of the pot with a cone 10 clear glaze. I then do a high-fire bisque to cone 10 in a reduced atmosphere. Afterward, I spray on a cone 6 commercial clear glaze when the pot is still warm, which helps evaporate some of the water from the glaze so it adheres to the surface, then I reload it into an electric kiln and fire it to cone 6. This may sound backward but it resolved a crazing issue I was having with my glaze. It also allowed me to patch any small cracks in the clay that may have resulted during the cone 10 firing.