A while back, we posted an article on using rare earth metals in high fire glazes. The rare earth metals, specifically the lanthanides, produce vibrant candy-like colors in ceramic glazes. Well, if you liked what you saw in that article, but you don’t fire to cone 9 or 10, you will love today’s post.

In this excerpt from the Technofile in the Ceramics Monthly archive, Ryan Coppage, PhD gives the low down on rare earth minerals and shares a couple of rare earth cone 6 glaze recipes. Enjoy! –Jennifer Poellot Harnetty, editor

PS. To learn about the dichroic effects (how rare earth metal glazes can change colors in various light sources), check out the November 2017 Ceramics Monthly!

Rare Earth Metal Definition: These elements are found in the lanthanide row of the periodic table, are rarer than others, and require some specialized processing for their purification. Unfortunately, they’re also a little more expensive, costing $60–80 per pound; however, they provide very unique color profiles and one has dichroic effects. 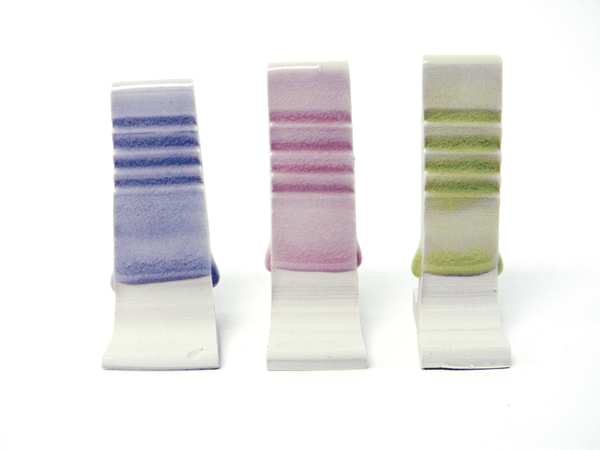 There are a variety of rare earth metals—28 of them in the lanthanides and actinides, to be exact—and many are either too expensive or radioactive, to incorporate into a glaze. The actinides are all radioactive, as elements after bismuth tend to be. Their nuclei are so large that the overwhelming number of protons and positive charges are not stable, blasting them apart into smaller-sized elements. Fortunately, most of the lanthanides are safe—even safer than copper, with a lower acute toxicity. They possess electrons in both the f and d orbitals that allow for some very unique color events—different from all of the transition metals that are traditionally used for ceramic glaze color.

The three rare earth metals that produce significant visible color are neodymium, erbium, and praseodymium. These have been shown to have intense color results in high-temperature firings, but have not been widely adapted for cone 6 oxidation. Since these are somewhat pastel at high metal loading (high percentages for metallic colorants), they are considered weaker colorants than the traditional transition metal colorants. This higher metal loading in a glaze base warrants mindfulness of cost as a function of that higher loading. While neodymium is reported to be sufficiently color-rich at 4–6%, the dichroic effect is more suitably strong at 7–8%. Praseodymium has a sufficient pastel green color at 7.5% and erbium is a soft rose pink at 8–10% loading.

There are three main glaze bases covered in this article. Two are adapted cone 6 celadon bases that assist with stabilizing the density of the rare earth metals put into them. In addition to those bases, I would recommend adding 0.05% CMC gum to the Nucular Green glaze to prevent settling. The Sorority Pink glaze possesses a significant amount of EPK, which is inhibitive of settling. Additionally, the base glaze stabilizes little bubbles within it, much akin to Ron Roy’s 20’s base; however, this recipe uses only the simplest of ingredients, which is more learning-effective for beginning students with respect to understanding glaze design from raw material components, and omits the need for purchasing specialized frits or wollastonite.

While any of the glaze bases can have one of the rare earth metal oxide colorants added to it, like the tiles glazed with the Bubble Base Glaze in (1) (which is the base recipe listed for Sorority Pink on page 58), each base was tuned to complement its colorant. The WTF Purple glaze is fully translucent with heavier crazing, to accentuate the dichroic effects. Sorority Pink is a softer/more muted pink in a high EPK kaolin base that does not show crazing on porcelain. Finally, the Nucular Green has some opacity/satin character, which complements the neon green color and feel of the cups (2). If erbium is used in either of the other bases, especially the neodymium base, it comes out as an electric candy pink and not a soft rose pink. Notably, the WTF Purple glaze is named after the exclamation that most people make as they transition across various light sources and observe color shifts in the glaze.