We all have them—bowls on countertops, shelves, or dressers that catch our keys, jewelry, or spare change. But as makers of handmade pottery, we have the ability to make them more special than the average knick knack bowl picked up at the local big box store. And what better way to make something more special than to put it on a pedestal.

In today's post, Frank James Fisher shares his technique for throwing in two parts to make what he calls a petal bowl because of the flower-like rim treatment. - Jennifer Poellot Harnetty, editor

The majority of functional ceramics are used in the kitchen and dining room. So it’s nice when functional ceramic arts appear beyond those rooms. The petal bowl has evolved into one of those items. In the past, an assortment of rings, earrings, and jewelry were scattered around our sinks and countertops. Now, the petal bowl collects these into one tidy and secure place. By raising the bowl up on a stem and embellishing it with a stylized flower motif, the petal bowl is both decorative and functional. The nub in the center of the flower mimics a flower’s stamen. Our version of the stamen holds a ring while preventing jewelry items from piling up in the center. Jewelry baubles are forced to occupy the perimeter and are much easier to identify and pick up.

The petal bowl is assembled from two pieces: the petal bowl and the pedestal stem. To begin, wedge 2 pounds of clay and separate them into 2 balls. Throw the petal bowl first. Open to a shallow bowl, but leave a small nub of clay in the center floor of the bowl. Pull the bowl sides up and out, thinning the wall’s thickness. Create decorative grooves on the bowl’s floor with a carving tool. Consider varying the width of the grooves to add a little variety to the design. Smooth the walls and the center nub with a chamois and refine the curve of the bowl’s wall to a 45° angle from the base.

To create the petals, lightly mark four evenly spaced increments on the edge of the rim. Using a wet, narrow-shafted wood tool, align the wet tool vertically against the mark on the bowl’s rim and press the rim toward the bowl’s center. With the tool held steady in one hand, place a wet index finger from the other hand on the clay rim along the left side of the tool. Gently pull down and drag the finger outward from the bowl’s center (figure 1).

Now pull the wood tool upward and slightly in to create a sharp crease. Be careful not to cut too deeply or the clay wall will split. Repeat the process at each of the three remaining rim marks in order to simulate a flower with petals (figure 2). Undercut the base with a wood tool to assist in guiding the cutting wire. Cut the petal bowl from the bat with a wire and set aside.

To make the pedestal stem, center the remaining one-pound ball of clay. Throw the base upside down. Open the clay to create a small cylinder and pull the wall up to form a tube. Choke the center into a gentle arc and flair the rim out. The rim will become the foot of the base when it is flipped over and attached to the petal bowl. Smooth the rim with a chamois and cut into the base near the bat to form a right-angled notch with a wooden rib (figure 3). Add decorative spiraling with a wood tool if desired. Mark a groove with a pin tool for the cut-off (figure 4).

When both the bowl and stem are leather hard, trim and attach the two parts. To trim the petal bowl, secure a jar to the wheel and invert the bowl over the jar opening. Use a trimming disk to hold the bowl tight to the jar (figure 5) and trim the bottom of the bowl into a rounded base. 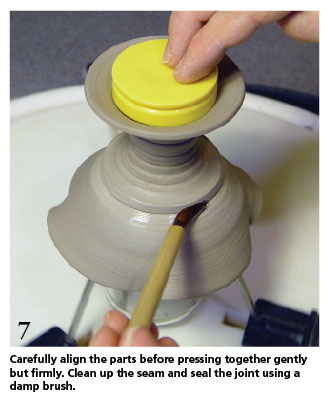 The bowl will be mounted to the pedestal stem, so a standard foot is not needed. To trim the pedestal stem, use an X-acto knife to cut the base from the bat. Slice the clay by following the groove made with the pin tool, (figure 6). With the bowl still inverted on the jar, score the base of the bowl (figure 7).

Next, score the base of the stem and apply a liberal coat of slip to both pieces. Carefully position and align the stem in place and press to attach (figure 8). Clean and smooth the joint. The combined parts may be unstable perched on the jar, so hold the piece secure while trimming and cleaning. The petal bowl is now assembled and complete (figure 9). Set the piece aside to dry, then bisque and glaze as desired.

Frank James Fisher is a ceramic artist and author living in Milford, Michigan where he teaches, presents workshops, and maintains a studio. He can be reached through his website: www.frankjamesfisher.com.