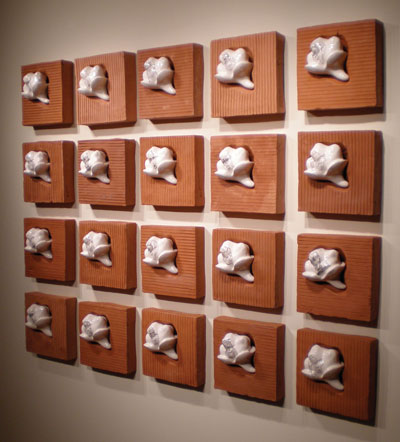 A field of blooming cotton under a blue sky can be dazzling, even disorienting as its snowy appearance conjures associations radically at odds with the dry heat of a summer day. This curious confounding of the senses is perhaps only fitting, since cotton is enveloped by other, more troubling, contradictions as well. Fleecy white cotton bolls are visually and tactically among the most appealing of all natural forms, and there is little wonder that an artist should find them formally inspiring. To the eye, what could better exemplify purity? As a crop, however, cotton is haunted by a troubled past of prolonged association with imperialism, slavery, forced migration, and class exploitation. Historically, it is intertwined with the misery of Africans in North America, the bleeding of India under the British Raj, the bankruptcy and annexation of Egypt, and the suffering of the rural poor in the American South. To the mind then, what could better exemplify oppression and debasement? Purity and corruption, beauty and evil intermingle in a sensuous and conceptual weave around the cotton boll, and even the powers of the artist cannot fully extricate the form and return it to a state of simple neutrality. 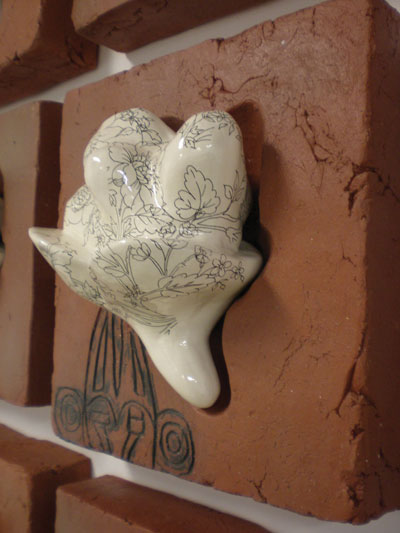 For sculptor Lydia Thompson, a professor of ceramics at Virginia Commonwealth University, the paradox of the cotton boll's attractiveness as a natural form and its repugnance as a symbol of a history of exploitation, specifically of Africans and African-Americans, has proved intriguing enough to support a series of diverse works in various media. Among the earliest of these is a series of sculptures that she began in 2007 while a resident at the International Ceramics Research Center in Skælskør, Denmark, almost 4000 miles from the cotton fields of the American South. Her immediate inspiration was the theme of migration and its connections to her own ancestry. The resulting sculptures represent glazed ceramic cotton bolls-rendered hollow and biomorphic, like ghostly white internal organs-heaped upon trays resting on red-wheeled carts reminiscent of flatbed railway cars. These sculptures in part indicate a shift of focus within a reflection on identity that has characterized Thompson's activities for a number of years. "The past work that I've done has always related to my West African heritage," she explains. "but I began to feel that I needed to pull away a bit and focus on the roots of where I am now, here in the U.S. I thought about migration, particularly from the South to the North, and the way that the cotton industry prospered because of railroad tracks." 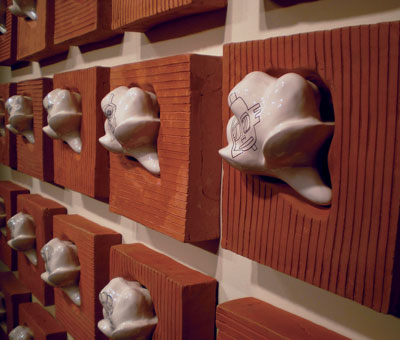 The anthropomorphic quality of the cotton bolls in Thompson's cart sculptures -their suggestion of body parts and the potential for synecdoche that this resemblance introduces-has become less pronounced in her more recent works, though the theme of movement of populations remains central. Replacing her emphasis on harvested bolls is a new interest in the cotton field in bloom, an actual example of which Thompson saw for the first time only a few years ago at an agricultural teaching facility in Richmond. Later, working partly from photographs taken during a family reunion in Bennettsville, South Carolina, she attempted to capture the effect of a blooming field in paper sculpture, a medium in which much of her most important work has been rendered over the past decade. Since completing three of the paper sculptures of fields, she has made a point of exhibiting these planar constructions as essential counterparts to her ceramic sculptures and installations. Presented behind Plexiglas in deep shadow-box frames, the paper sculptures are cut from Canson stock paper in a simple palette of brown and white. The delicacy of the two-dimensional forms in these works serves as an important supplement to Thompson's ceramic renditions of cotton, which capture the shape and volume of the bolls but, naturally, convey little of their lightness. 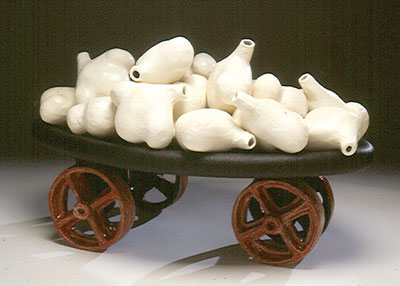 Regardless of the medium, the majority of Thompson's recent work is grouped under the compact title Promises, a reference to a Civil -War-era military order granting 40-acres of farmland to freed slaves in the coastal regions of South Carolina, Georgia, and Florida. Later revoked by President Andrew Johnson, the unfulfilled promise of land grants came to represent for African-Americans the failure of Reconstruction policies and the continuation of racial oppression. Thompson's work is not, however, devoted to commentary on specific political history but rather to a more general reflection on issues of African-American identity, community, the landscape, and ties to place. If the cotton field represents a site of exploitation it is also clearly envisioned as a place of nurture and implicitly a common ground for unification of the exploited. In Thompson's sculptures, the earthiness of the field, its composition of rich, red soil retaining the heat of the sun and offering the promise of growth, seems a catalyst to resilience and a fertile resource upon which to re-establish a sense of stability. Re-rooting is a prominent metaphor in the cotton field sculptures, particularly those produced as installations of thick ceramic tiles arranged in vertical grids: Promises and Bloodlines. In these works, linear imagery overlies the white surfaces of the cotton bolls, connecting them to certain historical and cultural contexts in which cotton has been cultivated and transformations in the identities of populations have occurred. 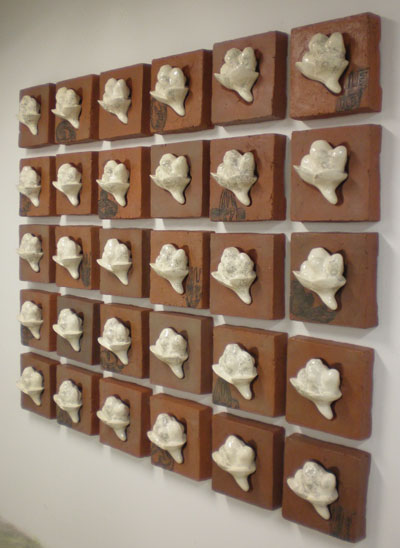 Thompson produced the immediate precursor to the wall-mounted ceramic installations (a pair of earthenware tiles decorated with abstract representations of foliage and combined with white reliefs of cotton bolls) at Skælskør. "I was only going to be in Denmark for four weeks," she recalls, "and realized that I couldn't do a large body of work in that time. I made some of the cart sculptures there, but after a while I asked myself why I was doing something that I'd already done back home. I decided to push myself to come up with something new, and I focused on tiles." The prototypes made in Denmark established the basic elements that Thompson has incorporated into two subsequent installations, though the decorative flourishes have diminished in favor of a simpler rendition of earth and plant. The linear imagery, in the form of black ceramic decals, continues to articulate the glossy white surfaces of the abstract cotton bolls as an essential means of linking the formal elements of the compositions to the cultural and historical contexts that inform Thompson's conception of the work.

In the 2008 wall installation Promises-which consists of 20 thick, press-molded, Virginia red clay tiles that are inset with slip-cast and white-glazed earthenware cotton bolls-the only decoration of the tile surfaces consists of patterns of shallow parallel grooves alluding to furrows in a field ready for planting. The edges of the tiles are relatively rough, exhibiting evidence of the compression of the clay that brings to mind geological fold trains in the strata of the earth. The cotton bolls are set into shallow depressions carefully prepared in advance, but the effect for the viewer is of their having been pressed into the tiles while the medium was still in a plastic state. These features effectively convey the appealing qualities of raw clay and rich, moist soil and affirm the positive symbolism that the earth possesses in Thompson's works. "Slaves were close to the ground," she observes. "They were part of the process of nurturing and harvesting the cotton plant.

When they were brought from Africa, these people were from different ethnic groups and they spoke different languages, but the earth was something that they had in common, something that physically united them." In order to reflect upon the diversity of displaced African cultures and the mingling of differences through the shared experience of cultivating the land, Thompson incorporated linear renditions of ritualistic masks into her wall installations. Representing various West African carving styles (and some inventions on Thompson's part), the masks symbolize ethnic identities and refer to the distinctive rituals through which those identities were formed and perpetuated. In Promises, the drawings of masks were transferred to the surfaces of the abstract cotton bolls as ceramic decals, but in the subsequent 2009 wall installation Bloodlines Thompson found it more appropriate to inscribe these images on the surfaces of the earth-like tiles and emphasize the lines through application of iron oxide.

Like petroglyphs, or more ephemeral images scratched into compacted soil, these drawings represent the imprint of identity on a common ground: the "movement of ethnically diverse populations through slavery to the American South and the blending of their traditions through shared labor." Completing the imagery are black-line decals of floral patterns applied to the cotton bolls to suggest the products of European textile mills to which the raw American cotton was shipped in the 18th century. This expansion of focus to include the broader economic context of cotton is a likely indication of where Thompson's work will head in the future. "At the moment it's still closely connected to reflections on my culture," she observes, "but I think that this body of work will continue to lead me into even more universal terms."

the author A frequent contributor to CM, Glen R. Brown is a professor of art history at Kansas State University in Manhattan, Kansas.