Line Blends: A Surefire Way to Build Your Understanding of Ceramic Glaze Materials Get sure-fire results when you do a line blend test! Greg Daly

Let's face it. We've all had glaze disasters in the kiln. From the mild disappointment of a glaze not turning out exactly the color you were hoping for to a glaze completely running off a piece and ruining a kiln shelf. That's why it is so important to test our glazes.

Line blends are a pretty simple and straightforward way of testing glazes that can yield a wealth of information. In today's post, an excerpt from Developing Glazes, Greg Daly explains how to do a couple of line blends and shares some recipes you can try. - Jennifer Poellot Harnetty, editor

Line blends are one of the most useful methods by which to blend two materials together, such as an oxide or stain into a glaze base, or even two glazes together. Within these variations there is more flexibility in how they can be used to give quick and easy responses. A number of variations will show how you can use this method for blending. This is probably the most valuable system for finding out simply and quickly what the response is between two materials. 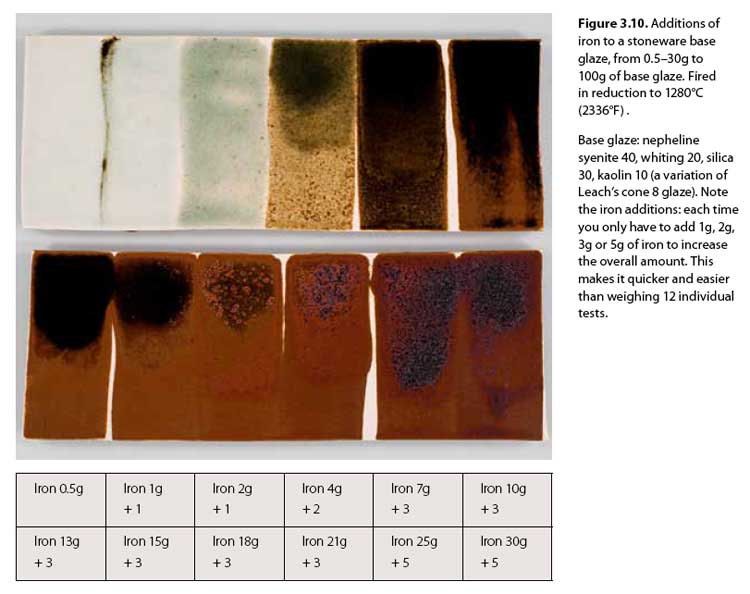 Here is an example of using a line blend to add Iron to a base glaze. The process is as follows: take a 100g of base glaze, add colorant, mix, and apply to the test piece. Then add the next addition to the mix, apply and keep repeating these steps. Note that as we are removing some of the mixture to apply to a test tile each time, and as there are 11 additions, the final mixture is thrown out of proportion, with a higher amount of added oxide/material in the mix than we have recorded. There is a simple solution to this problem: use a larger amount of base glaze to start with - say, 200g or even 500g. Increase your additions by the same ratio. This iron test shown in Figure 3.10, using 500g of base glaze with iron additions, took 20 - 25 minutes to complete. 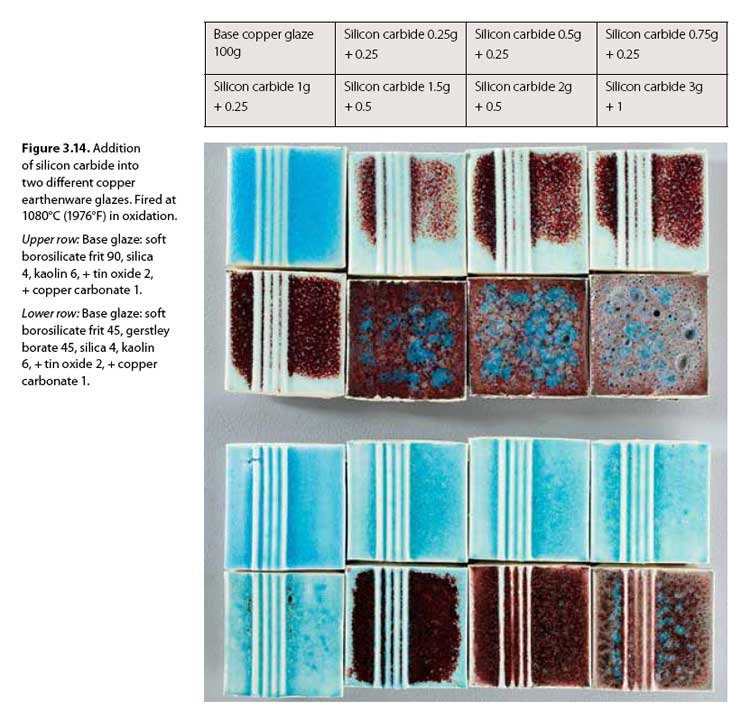 With 12 test applications you are removing glaze from the mix at around 2 - 3g per application, which will skew your final results: they will have a greater amount of iron in each application than you originally intended. You can either mix 12 tests individually or use a quicker method: start with a larger amount of 200g or 500g of base and this will give you accurate results. Remember to multiply your oxide by the same amount, e.g. for 200g of base glaze, multiple quantities of every addition by two also.

If a line blend is used to add silicon carbide to a copper earthenware glaze, the silicon carbide creates a localized reduction as the carbon burns out below 1000 degrees Celsius (1832 degrees Fahrenheit), reducing the copper as the glaze melts. Here, two different recipes are used to see which responds more to silicon carbide. Note that in the top series, the red is developing with a small addition of 0.25g silicon carbide in the copper glaze, whereas the lower series takes an addition of 1g before color change. As only a small amount of silicon carbide is needed, 200g of the base glaze was used with a 0.5g addition.

This was excerpted from Developing Glazes, which was co-published by Bloomsbury Publishing and The American Ceramic Society.