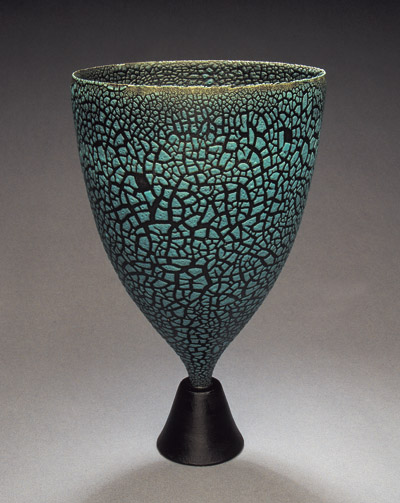 Although glaze crawling—when glaze recedes away from an area in the firing, leaving bare clay—is often considered to be a glaze defect that should be avoided, many ceramic artists use this so-called defect quite effectively as an intentional decorative element. Glazes are sometimes formulated to intentionally crawl and create reticulated surfaces resembling lichens, leopard coats, or lizard skin.

Here, the late Robin Hopper presents a slip recipe and a base glaze recipe for such an effect, and gives examples of this slip and glaze combination with various ceramic colorants added. - Jennifer Poellot Harnetty, Editor.

A group of specialized glazes have come into favor in the last 15 years: glazes that show patterns of heavy crawling, or reticulation, with patterns that look similar to lichens, lizard skin, and leopard skin depending on the glaze base, underglaze coatings, and temperature of firing. The same glaze may give very different results at a variety of temperatures.

Putting the reticulation glazes over a colored slip allows the top glaze to move and the visible cracks to be colored between "islands" of glaze. Any colored slip will do, but one of the most interesting is usually black.

With the following reticulation glazes applied heavily over the slip and fired at cones 04, 6, and 10, and with added colorants, a wide range of textural possibilities can be developed (see images below). The main requirement in the glaze is a heavy saturation of magnesium carbonate.

Note: This glaze should not be used on surfaces that come into contact with food.

You will note in the photographs below that the overglaze fuses greatly at the higher temperature (Cone 9), giving smooth surfaces, whereas, at the lower temperatures (Cone 6), the glaze will be either beaded or dry and crispy like dried mud. Similar results can often be achieved by putting many matt glazes over glazes that are much more fluid. The more fluid glaze will generally start to melt earlier during the firing, encouraging fissures to develop in the matt glaze surface. So-called leopard skin glazes are usually done this way. The reticulation glaze may be colored with any colorants and stains. 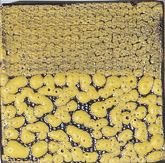 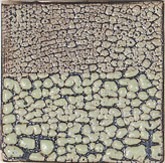 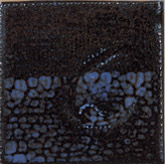 Most of these glazes have been applied over a simple black slip in order to intensify the color of the covering glaze. Any black slip would be suitable to use. The one used here is from the formula above. Other colored background slips greatly extend the possibilities of palette. Firing these glazes at a wide variety of temperatures from cone 04 to cone 10 also greatly extends the possibilities.