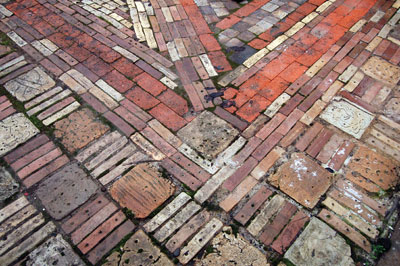 Let's face it, the ceramic medium by it's very nature is not a very green art form, but fortunately, there are a lot of simple things that can be done in the studio to lesson the impact on the planet. In the article below, you'll hear from Kristin Schimik about the efforts of three university ceramics programs that are making great strides in the area of sustainability. - Jennifer Poellot Harnetty, editor

There is growing recognition of the need to align our studio practice with an awareness of environmental sustainability. Individuals and groups are already engaging with green issues in studio ceramics and are devising, enacting, and posting solutions. The National Council on Education for the Ceramic Arts (NCECA) Green Task Force has been working for the past two years towards oversight of practical stewardship at the annual conference and to assist in the over all exchange of ideas and information that minimize the global impact of our field. The discussion must involve the entire community, including the perspectives of individuals, educators, students, and manufacturers. This article takes a look at three examples of sustainable ceramic practice in university ceramic programs.

The University of Oregon 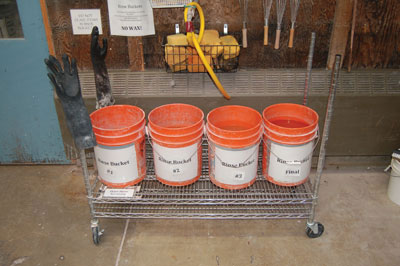 The University of Oregon (UO) in Eugene has a long history of engaging in environmentally responsible ceramic studio practice. For more than ten years, students in the ceramics department have been participating in a system set up to capture glaze waste, including heavy metal colorants, combine them with recycled clay, form this into paver blocks, and fire them to cone 1. The glaze waste recycling system grew out of dialog between faculty, staff, and community about ways to reduce the environmental impacts of the art program.

The work began in the mid-1990s as a result of the efforts of Professor Sana Krusoe and then graduate student Nancy Frazier. Krusoe stated that she "learned about waste conservation from Gordon Ward, a local potter, who used one glaze, kept all his rinse water, and converted it back to glaze." Initially, glaze waste was consolidated, tested, and donated for use in area public schools. However, an excess of glaze waste remained. Faculty, staff, and graduate students at the University of Oregon had been contemplating ways to work towards reducing waste. When the task of recycling a backlog of glaze waste was given to Frazier, she began the process of making usable paver brick and recruited student volunteers to dehydrate, mix, shape, and test fire different ratios of clay to glaze waste. 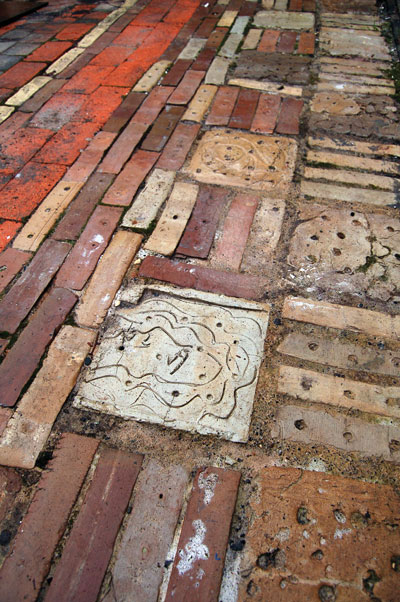 There is no running water in the glaze room at the University of Oregon. Instead, the students are required to wear gloves and utilize a series of four rinse buckets, with each in the sequence cleaner than the last. There is a primary system set up to collect standard glaze materials and a secondary series of receptacles to collect the soluble glaze materials. The insoluble glaze materials are allowed to settle, and then the water is siphoned off. The resulting glaze slurry is combined with waste clay at a 1:1 ratio. The smaller quantity of material collected in the soluble bins is allowed to dehydrate back into salts and then it also is added to the mix. The "brick mix" is formed into perforated blocks and fired to cone 1 for use as pavers. Heavy rainfall common during winter in the Oregon valley makes the paver blocks highly desirable, and the first blocks were immediately put to use around the facility. The pavers are about 10 inches square and 2 inches thick and usually fire to a strong apricot.

Today, the blocks are donated to members of the larger community in and around the university. The students learn about the importance of environmental stewardship and generosity as part of the total curricula. Professor Krusoe's class in glaze chemistry participates in the waste reclamation process from start to finish. Often, the first objects that beginning ceramics students fire in the UO program are the paver blocks. This allows new students to quickly get involved and learn about the firing process while simultaneously recycling the glaze waste. The graduate studio technician and work-study students are also involved in processing the materials in order to maintain the efficiency of the system. 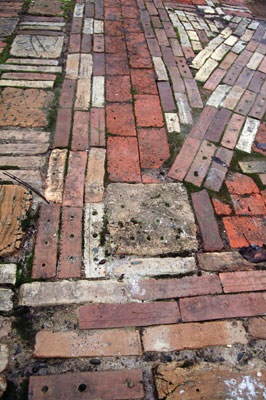 For those interested in establishing a glaze waste recycling program, Krusoe advises removing or boarding up the sink and putting up clear signage for the new recycling network. Users will adapt to the system. The ceramics department conserves all glaze waste, including mop water. Krusoe states: "We model a way of behaving around glaze materials that they can easily replicate in personal studios or introduce in a workplace. It has been valuable to us to offer an encyclopedic array of glazes and materials in an environment of rigorous safety and environmental protocols."

Since 2008, Humboldt State University (HSU) in Arcata, California, has been collecting the fired ceramic waste generated by students at the end of each semester for recycling. T.C. Comet, the sustainability coordinator at HSU, saw the opportunity to divert masonry compatible ceramic and sculpture waste for use in general construction. Their system is set up with several 55-gallon collection barrels, themselves recycled from previous use on campus, to collect the ceramic and sculpture waste. The masonry waste is then taken to Kernen Construction, a local company that accepts concrete and masonry debris on an ongoing basis from the community. The company crushes and grinds masonry waste, including old sinks and toilets, for use in building foundations and as road aggregate. Crushing occurs whenever the debris pile grows large enough-usually two to three times each year.

Overall, the university saves money with this system, as solid waste disposal rates per ton far exceed the cost of transporting the masonry debris to the recycling site. State universities in California fall under the Integrated Waste Management Act, which requires all large state agencies to divert a minimum of 50 percent of solid waste from disposal facilities since January of 2004. Many universities in California have a sustainability coordinator to aid in making connections toward greening the campus. Strong student support for progressive environmental policy has been instrumental in meeting the mandate. 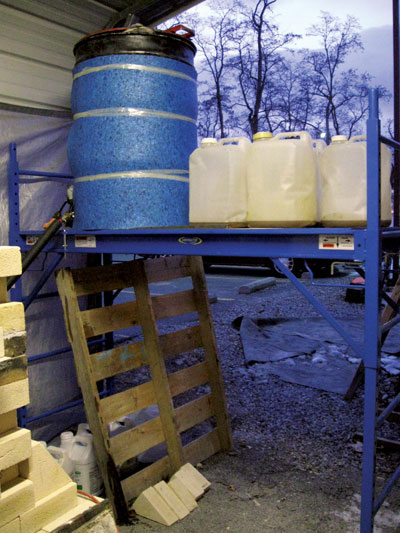 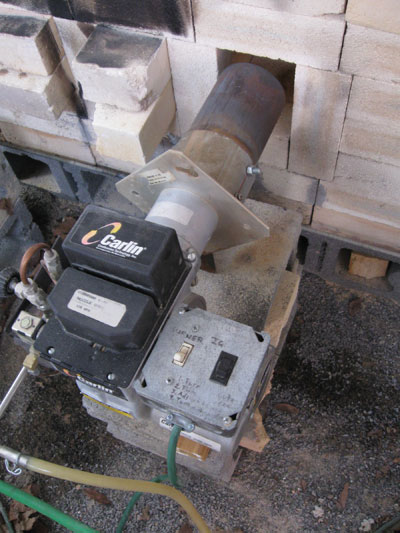 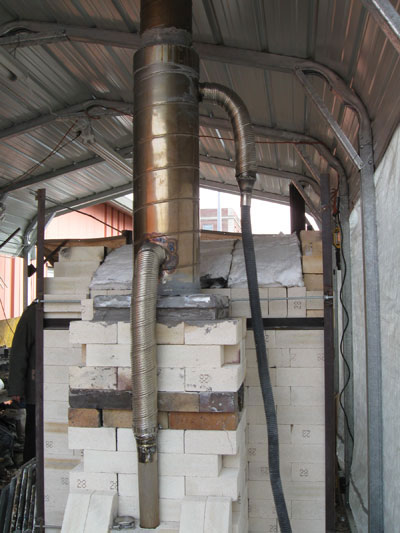 Ben Culbertson, professor at Shippensburg University in Pennsylvania, has been working to create a system that utilizes renewable fuels to fire a kiln from start to finish. After observing a wood/vegetable oil firing at the Archie Bray Foundation for the Ceramic Arts during a workshop by Allegheny Meadows and Michael Connelly in 2004, Culbertson began processing waste vegetable oil from the Shippensburg campus food service into biodiesel fuel for vehicles, home heating, and experimental firing. He received a grant in 2009 from the University Foundation at Shippensburg to continue to conduct research on burner systems for use with vegetable-oil-based fuels for kiln firing and BNZ Materials generously donated firebrick seconds to the project for kiln construction.

Currently, research and development continue in the test chamber and the 30-cubic-foot cross-chamber kiln with multi-fuel burner system built by Culbertson and his students. Vegetable oil, biodiesel, and glycerin are being tested for use as the primary fuel. The kiln was engineered to work with several different burner types. Thus far, the kiln has been successfully fired in less than eight hours to cone 10 on approximately 20 gallons of biodiesel using modified oil burners. In the next round of tests, Culbertson expects fuel requirements will be further reduced by the utilization of a recuperative air system that was designed into the kiln in order to harvest heat around the chimney pipe for use to preheat intake air.

Additional exploration is ongoing with a drip-plate burner system and also a basic Babington burner setup that utilizes an integral combustion chamber with a source of forced air and ventilation. Perhaps most inspiring is the work Culbertson is doing exploring the use of solar cells to charge a small battery bank and human bicycle power for a small DC motor to support the secondary power needs for blowers and burners, thus completely eliminating the need for grid-based power and fossil fuels. The oil burners have an oil pump, blower, and igniter that require electricity to run. For solar, a two-part system consisting of a 12-volt battery and an inverter to convert to 110-volt alternating current will allow the burners to operate. Culbertson's team has successfully tested the 12-volt battery to run the burners. Preliminary testing has begun with a bicycle-powered generator using a small Ametek DC motor, conventionally used in wind-power generation, that has been shown to produce adequate wattage and amperage to run the pumps and blowers. Two students exercising on the bikes during the maximum three hour kiln preheat period would meet all energy needs before the vegetable-oil drip-plate system, with no electricity requirements, would take over to complete the rest of the firing. Culbertson will be presenting his extensive research at the lecture entitled "Vegetable Oil Based Alternative Fuel Burner Systems" on April 2, 2010 at the NCECA conference in Philadelphia.

For students, faculty, and individuals interested in researching and developing alternative energy sources for firing, Culbertson offers this advice: "There are several phases in the process and it is often hard work. You will need people driven by purpose. While fossil fuels remain relatively cheap, all the work on alternative fuel will be rendered novel or lose its luster without the commitment that what we are doing is a sacred task. It is not hyperbole to say the earth is at stake. This purpose will help you endure the indignities of grease stained clothing and its commensurate odors."

University educators and students have the opportunity to work together to innovate on current policies and generate new solutions as to how we conduct ourselves in the world. The University of Oregon, Humboldt State University, and Shippensburg University provide examples through current practice of some concrete actions that we can take today in order to change our collective behavior. It is necessary at all levels of society that we continually engage in this conversation and put the best solutions to work for us.