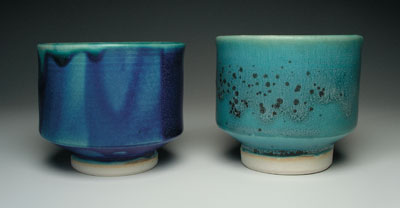 The author tested and demonstrated barium carbonate substitutions for the following glazes:

Also, check out the author's explanation of Molar Versus Weight Substitution, as well as his Conclusions.

Barium carbonate has long been used as an ingredient in high-fire glazes, sometimes conferring unique properties upon glazes. One of the alkaline earth carbonates, it has also been used as rat poison (large doses can be toxic to humans as well). Glazes containing it ought to be checked for barium leaching if they are intended to hold food or drink, or reserved for surfaces that do not come into contact with food. It is not my intent to present the research on barium toxicity here, but to present a course of action for replacing it in glazes.

Largely as a result of its toxicity, questions arise, from time to time, as to what might best be substituted for barium carbonate, and how much should be used. Hot on the heels of such questions are those about how similar the glaze will be to the original. I had come across some such discussions on the Clayart listserv and wondered just how successful one could be in replacing barium carbonate in a glaze.

I began by acquiring an old secondhand copy of James Chappell's The Potter's Complete Book of Clay and Glazes, as well as various other recipe sources. I then went through them and gathered all the barium containing Cone 10 glazes for which I already had, or could easily get, the materials. This gave me 34 glazes ranging from matt to satin to gloss, with a variety of colorants and varying amounts of barium carbonate.

The study consisted of mixing each one of these glazes in three forms, and then comparing the fired results. The first was the original, the second used strontium carbonate in place of the barium carbonate, and the third used whiting. All tests were done on Glacia Cone 10 porcelain from Clay Planet in Santa Clara, California. I mixed up each glaze and applied it to two tests pieces each, one for an oxidation firing, the other for reduction.

All substitutions were performed with glaze-calculation software. Substitutions were made on a molar basis so the ratios of total fluxes to alumina and silica were maintained (see "Molar Versus Weight Substitution" on page 44). In doing this, one finds that only 75% as much strontium carbonate, by weight, is required, and only 51% as much whiting.

All tests were fired in a downdraft gas kiln at the Foster City recreation center, where I have made pottery for a number of years. Needless to say, I am very grateful to the kiln loaders and to Tammy Burwell who fired these pieces.

After firing all the tests, I finally had lots of information. The time had come to try to make sense of it! In order to establish some criteria for matching, I looked at the fired samples a number of times and made notes on each sample on its own and in comparison with the original barium containing glaze. In the end, I settled on five properties that are significant in comparing the glazes. These are gloss, color, fit, stiffness and feel. In general the stiffness, or degree to which the glaze moved, was the easiest property to duplicate in the substitution. Surface feel was the hardest, driven largely by the difference in feel between barium and strontium matts, the strontium being drier. There were a number of examples among the whiting substitutes that showed a greater tendency to run.

Finally, there is a set of glazes for which the whiting substitute produced a significantly, though not drastically, runnier glaze, than either the original or the strontium variant. This happens when the glaze is a matt or satin and the original glaze contains substantial quantities of barium carbonate and whiting to begin with.

Let's consider two methods of material substitution in glazes. The first is by raw material weight and the second is molar (molecular) substitution. Substitution by weight is exactly what it sounds like; replace 25 grams of barium carbonate in a recipe with 25 grams of whiting. While this will produce a glaze that can be fired, it's likely that it will be runnier than the original. The reason is that 25 grams of whiting supplies far more molecules of flux than 25 grams of barium carbonate does. Substitution on a molar basis, on the other hand, will give a more comparable glaze. In this case, the total number of molecules of flux will remain the same relative to the alumina and silica. This is significant because glazes are formed by chemical reactions between the molecules during the firing.

The original recipe above contains 6.62% barium carbonate by weight, but the strontium version only has 5% strontium carbonate, and the calcium version only has 3.7% whiting by weight. Now look at the unity formulae; the portion of the fluxes that is substituted remains a steady 0.13. Thus, the number of molecules of each component in the fired glaze is more important than how much the raw materials weigh. Molar substitution does not guarantee that the glaze will be the same as the original, but the general degree of melting will be about the same in most cases. There are glaze books that explain how to calculate this process longhand, but molar substitution is readily accomplished with modern glaze software.

These tests suggest the following, admittedly tentative, conclusions, though there are bound to be exceptions:

1. Less than about 0.2 molar equivalents of barium oxide appears to be readily substitutable.

2. Gloss glazes are easier to reproduce by substituting other alkaline earth carbonates for barium carbonate than matt glazes, even with relatively high concentrations of flux.

3. In matts where the matting is primarily driven by the flux, substitution is perhaps the least successful.

4. Glazes containing certain colorants are difficult to substitute with higher concentrations of flux, the classic being barium matt copper blue. Iron also can change color when barium is substituted.

5. The success of these substitutions was little affected by reduction versus oxidation atmospheres.

As always, this testing raises many questions. However, it does show that calcium and/or strontium are excellent, safe substitutes for barium in many glazes. Strontium does produce dryer matts and less dramatic copper blues. Calcium can make a glaze runnier, depending on the recipes. This knowledge should help artists looking for safer glaze ingredients for use in their studios.

the author When he is not making an insane number of test tiles, Daniel Semler develops software and makes pots in Belmont, California.