How to Prevent Bloating in Your Clay Body Learn how to troubleshoot the basics! Dave Finkelnburg 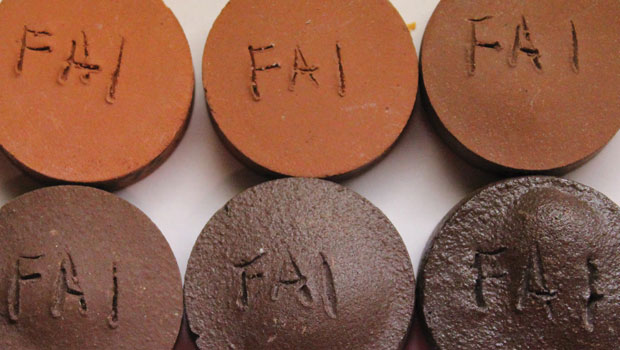 Typically, when we hear the word “bloated,” we don’t immediately think of clay. More often, we think of the feeling after you’ve had a little too much to eat or drink, but today, let’s focus on bloating in clay bodies. Bloating is defined as a firing defect in which blisters form within a clay body, causing large lumps on the surface.

In today's post, Dave Finkelnburg explains the causes of bloating and shares how you can prevent this unsightly defect in your work. –Jennifer Poellot Harnetty, editor

Overfiring is the easiest cause of bloating to recognize. Keep in mind that all ceramic bodies are intended to be formed at room temperature and then fired to durability while retaining that shape. However, if the firing is too hot, known as overfiring, the shape will be lost as the body just starts to melt.

Clays usually contain some organic materials which will burn in the presence of enough heat and oxygen. Some clays contain small to significant amounts of tiny crystals of pyrite, an iron sulfide. The sulfur in pyrite burns readily at moderate kiln temperatures and in a properly fired kiln has burned off by about 1300°F (700°C). However, if the kiln is starved for air (unlikely in a well-vented electric kiln or a carefully tended fuel-fired kiln) the sulfur, as well as organic materials, can still be present. If oxygen gets into the kiln later in the firing, when the clay body is soft due to nearing its peak firing temperature, large volumes of gas will be generated by the combustion of the sulfur and organics and that will cause gas bloating in the ware. 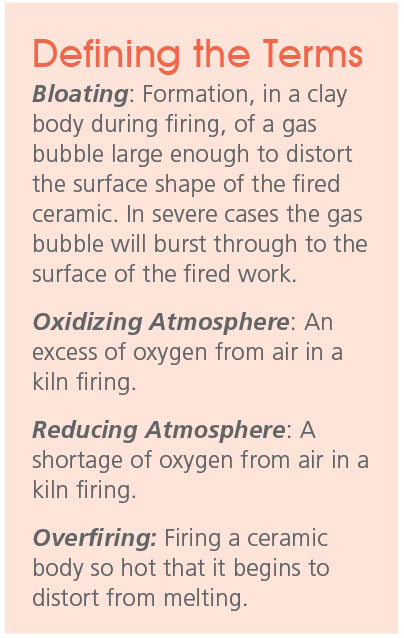 When firing is clean and fully oxidizing until organics and sulfur are burned off, but bloating is observed, then the fault is not with the firing, but rather with inconsistencies in the clay body mixing. The fault is that flux in the clay body is concentrated in clusters, rather than being distributed uniformly throughout the body. As any clay body approaches peak firing temperature, two features are always present in the work. There is a liquid glass phase formed from flux elements in the body melting the glass former present. There are also small bubbles of kiln gas left over as the body shrinks and becomes dense from the firing.

The glass phase, being a liquid, has almost no strength. At this point in the firing, the strength to keep the ceramic shape is supplied by the clay, quartz, and other more refractory materials in the body.

The gas bubbles naturally exert force to expand because the temperature everywhere in the kiln and ware is rising. The bubbles expand if they are not confined by the clay body. In a well-mixed clay body, the liquid-glass phase is present in minute droplets too small to see with the naked eye. However, in the case of a poorly mixed body, or one contaminated with lumps of flux mineral, the glass phase forms pools just large enough that the clay-body structure is susceptible to being ruptured by expanding gas bubbles. That’s what happens when a clay body bloats due to poor mixing of its ingredients. An excessively large glass pool weakens the clay and expanding gas forms a bubble at the site.

Note that while the body is overfired locally, the body does not look overfired in general. Certainly, bloats would not appear if the ware had been fired to a lower peak temperature, but firing temperature alone is not the root cause of bloating. The firing simply reveals the poorly mixed body’s susceptibility to this fault.

It is critical that the first firing of all ceramic work be done in a fully oxidizing atmosphere until all organics and sulfur compounds are burned off. This is especially critical with work that is to be fired to full density—functional work intended to be impervious to water or other liquids.

A good rule of thumb is, regardless of the heat source of the kiln, fire such work in a fully oxidizing atmosphere up to ~1500°F (~816°C). Organics and sulfur will have burned cleanly off by that point and will not cause problems later in the firing.

When bloating due to poor clay mixing occurs, the culprit is almost always feldspar in the clay body recipe. Feldspar, when handled dry, tends to form small clumps due to electrostatic attraction. Feldspar clumps, if blended into the body, cause bloats.

Such clumps can easily be prevented by simply mixing the water for the clay body recipe with 5 to 10% of the clay to be used, and then mixing the feldspar into that dilute clay slurry. This process, best done with a high-speed mixer, coats the feldspar particles with just enough clay to prevent feldspar clumping.

It is also possible for crystals of flux oxides to precipitate from clay slip found in recycled clay (crystals formed from soluble salts in studio water or dissolved from the body itself), and for those crystals to cause bloats. Where ware is formed from extensively recycled clay, but not from new clay of the same recipe, the safest remedy is to throw out the reclaim. Crystals can be removed by slurrying and screening, but the result will be a body of somewhat altered, and unknown, chemical composition. Clay is just not valuable enough to risk forming effort on a suspect body.