Appears in the May 2018 issue of Ceramics Monthly. 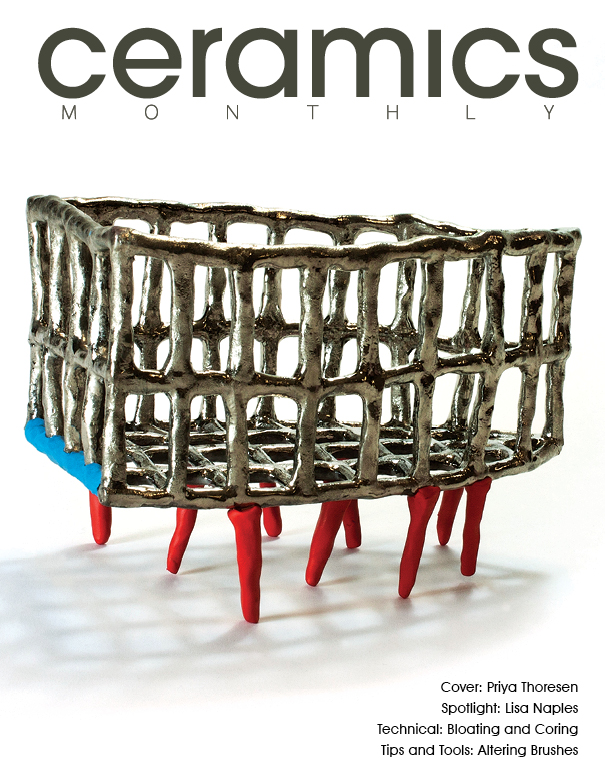 Bloating and carbon coring are firing issues that potters have been dealing with for a very long time. Carbon coring is more prevalent in reduction firings, as is bloating in oxidation, although both can occur in any kiln environment. To resolve these issues, the ceramic artist needs to understand the clay contaminants that cause them.

Pyrite: Commonly known as fool’s gold. A combined molecule of iron (Fe) and sulfur (S), which creates FeS2. The most common source of iron in raw clay.

Sulfate: Organic molecules of sulfur that usually appear as salts.

Sulfide Inorganic molecules of sulfur that are chemically bound to other elements, such as iron. Sulfides are directly attributed to bloating/ coring issues.

Sulfur: A chemical element noted for its bright yellow crystalline color. Sulfur combines with most all elements to form sulfates or sulfides. Iron sulfide and sphalerite (yellow zinc) are common in pottery.

Bloating and carbon coring form from a reaction of sulfur and carbons. The percentage of contaminants and the kiln environment determine which of the two occurs. Both tend to happen almost exclusively in stoneware bodies, but they can also take place in porcelain, although rare, if ball clay additions are made to increase plasticity. Fire clay and ball clay are both sources of sulfates, sulfides, and carbon. Specifically, contaminants come from organic sulfates, which generally burn off, and sulfides, which come from iron (sulfide) and lignite coal (this is why our books teach us that high-iron clays can produce bloating). While fire clay has some percentage of these, ball clays usually contain much higher levels. Natural pyrite (fool’s gold) is one source of iron sulfide. Lignite coal (found in ball clay) has much higher levels of sulfur and carbon.

Reviewing the chart (1), gives some indication of why bloating is associated with higher iron clay. However, notice that FC120 Ball Clay has slightly higher iron content than Glaze #1 Ball Clay, but has over three times the sulfur content, which comes from lignite coal contamination. The more accurate analysis would be as follows: higher sulfide content from iron (sulfide), compounded by even higher levels of sulfur from lignite coal particles causing bloating. The combination of sulfur and sulfides from both of these sources, plus organic sulfates, makes up the recipe for bloating and carbon coring. The level of occurrence goes up again when red clays containing up to 6% of iron (sulfide) are added to the recipe.

While conducting this study (to determine the level of sulfur in all forms that cause bloating), the following protocols were noted: porcelain was used in order to more precisely control the levels of sulfur and carbon in each sample. In addition, the glassy body of porcelain made contaminant distribution more readily visible. 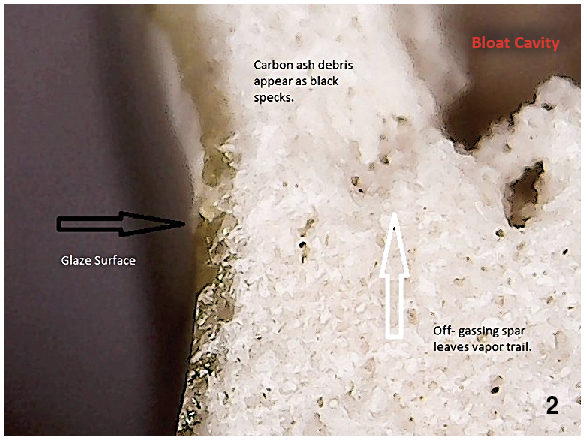 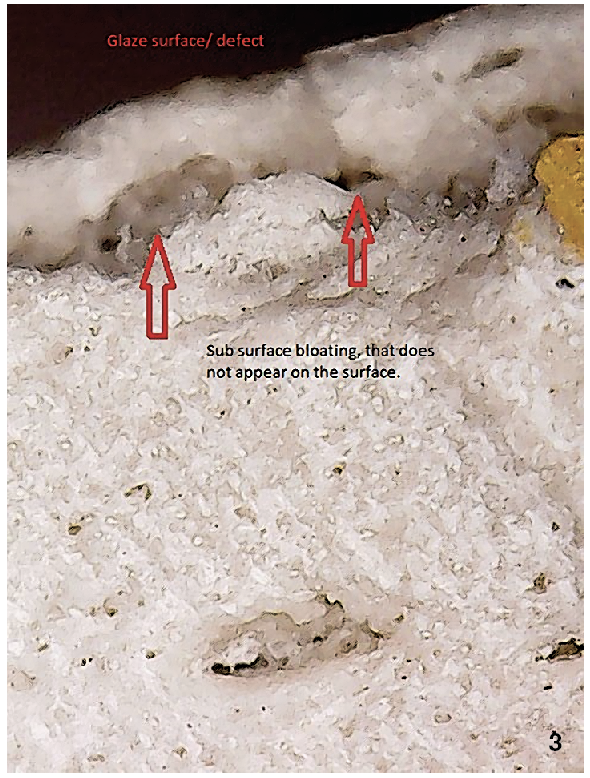 The low percentage of iron (0.88%) in this sample (2) did add a percentage of sulfur in the form of iron (sulfide), but the sulfur (lignite) and carbon content were the primary contributors in this case. In studies performed by Wayne Brownell in the 1950s on bloating and coring, he cited sulfurs as the primary cause of bloating and coring. While sulfates and carbons burn off in a normal firing schedule, sulfides are inorganic and generate sulfur trioxide while off-gassing. Improper firing can create an impermeable barrier that traps the off-gassing feldspars, which, in turn, creates the defect of bloating.

Not all bloating issues create the classic bubbles that potters are familiar with. Bloating pockets can develop just under the glaze surface, shown in figure 3. 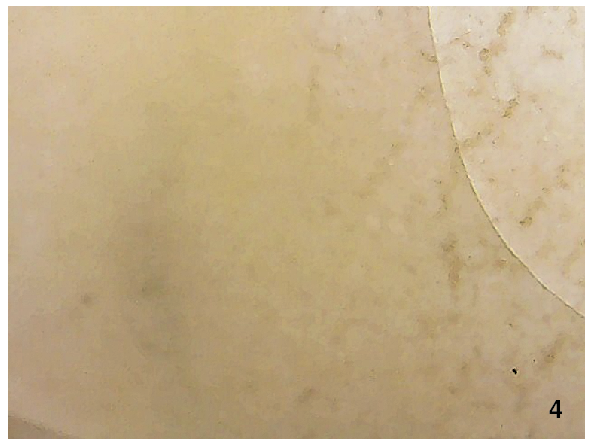 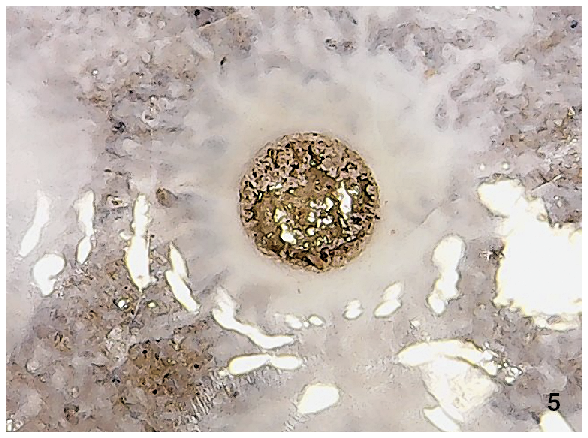 These pockets appear on the surface as sharp shifts in color, along crazing lines (4), coupled with unexplained dark patches (carbon trapping) in the glaze. Often times when visible bloating occurs, there are accompanying blisters (5), which can also happen if the bloating is sub-surface. This type of blistering has unique characteristics not usually seen in pin-holing that is caused by other firing/glaze defects. The bubbles pull surrounding glaze toward the blisters, creating a dimple around the crater.