How to Make a Spouted Batter Bowl That Tells a Story Plus, learn how to make a puffy handle! Courtney Long

It is a lot of fun to use pots to tell stories. It can be even more fun to not only tell a story on the form, but to work the form right into the narrative. That's just what Courtney Long does with her spouted batter bowls with a cloud-shaped puffy handle and playful slip decoration. In today's post, she shares how she makes these wheel thrown pots. - Jennifer Poellot Harnetty, editor.

I’m inspired by North Carolina’s landscape; the Piedmont region’s red dirt, fall colors found along the Blue Ridge Mountains, and local folk and Native American pottery traditions. Undertones of my experiences in China, Greece, the US Southwest, and the Appalachian Mountains combine and show themselves in whispers in my work. I enjoy making specialized objects that have nothing to do with necessity but are utilitarian in their own right. If only for a brief moment, these objects aid in daily activities before becoming part of the day to day backdrop as life transpires. In my home, the kitchen is the center of all activity. Size variations of the mixing bowl are used daily and symbolize conscious cooking, eating, and even cleaning up with friends and family. These little moments accumulate over time and a narrative is placed on the pot in a way that could never be achieved if it were unused, sitting on a shelf. It’s only after a lifetime of use that it truly becomes a powerful family heirloom, evoking stories connected to its users through memory.

Prepare 2¾ pounds of clay to create a medium-sized mixing bowl. Throw a flower pot shape. Leave around 1⁄8-1/4-inch clay in the rim so that it wont’t become too thin as you widen the rim later. Remove any throwing lines from the exterior surface as it’s going to be heavily decorated. On the interior, use a curved metal rib to remove any right angles (figure 1). Your bowl may slump if you don’t leave enough clay at the base or it has too deep of an undercut.

Place the bowl on a ware board and cover it overnight so the rim and bottom will dry at the same rate. Once it’s leather hard, you are ready to trim. Always trim the outside profile first. Make a cut defining the foot ring but don’t worry about its final width here. Trim the excess clay beginning in center and working outward (figure 2). If you intend to dip your bowl in slip or prefer not to use dipping tongs during glazing, it is a good idea to trim the foot in a diameter that allows your hand to hold the bowl comfortably upside down.

Roll out a 1⁄8-inch-thick slab on any nonstick surface. I use a Super Surface Clay Mat because it has a rubber backing as to not move while rolling and tossing slabs and it has a non-textured surface. Remove any air pockets and smooth out any surface texture using a rubber or metal rib.

Start with the spout form. I like to use tar paper as an inexpensive option to make water-resistant templates. Tar paper is available at home improvement stores for less than $10. The spout shape, is similar to the Rolling Stone’s lip and tongue logo. Fold your paper in half and cut out a desired profile so each side of the resulting template is symmetrical. Repeat this process for additional decorative shapes that will eventually become the handle—for this bowl, I cut out two cloud-shaped designs. Trace the spout and cloud templates onto the slab with a needle tool then remove them before cutting the clay. X-Acto blades are thin and give you a crisp line without dragging clay or altering the shape. Hold your X-Acto knife vertically when making the cut, not at an angle. Set the cutouts aside to stiffen until they become a soft leather hard.

To prevent cracking, place plastic over the spout and compress the edges (figure 3). Then gently coax the spout into a half rounded fold (figure 4). If there are any minor flaws in the bowl’s rim, chose to place the spout there. Dry fit the spout to the upper side of the bowl. Holding the spout with one hand up against the bowl where you intend to attach it, trace the outside of the form with your needle tool making a light mark (figure 5). Cut out the shape exactly on the line holding the knife straight and then go back over the cut to create a slight bevel. Score and slip the the cut opening then attach the spout working inside the bowl and pressing outward. Press the clay into the beveled cut with one hand placed on the inside and the other hand placed firmly on the outside wall (figure 6). To shape the spout for a better pour, wet your hand and pull the spout’s outside edge between right thumb and bent right index finger in a curved motion. Release pressure at the rim’s tip (figure 7). Hold the middle of the spout with your left thumb and left index finger while rubbing in a side to side and downward motion with right index finger (figure 8). Repeat these motions until you get the shape you desire. Give the seam a distinct line using a rubber-tipped tool (figure 9).

Place the cloud cutouts onto soft, thick foam and gently use your thumb, working from the center of the shape and releasing pressure toward edge, to puff them out (figure 10). Hold the two cloud halves up, in the shape of a closed clamshell, to the bowl’s rim opposite the spout and trace a light line (figure 11). Cut inside the line leaving a narrow area for the cloud to be attached (figure 12). Cutting out this section removes weight from the bowl’s rim and eliminates a second air pocket to worry about. Score and slip the attachment area and the edges of each cloud shape. Attach the outside cloud first, pressing along its edge only. Next attach the inside cloud, then pinch the edges together. Compress the newly formed edge with a sponge held between thumb and pointer finger. Trace the cloud’s outline with a rubber-tipped tool to remove any clay burrs or imperfections and create a distinct line. Push a small pin into the cloud to allow air to escape but don’t remove it until after the bowl is dipped in slip or hole will reseal. 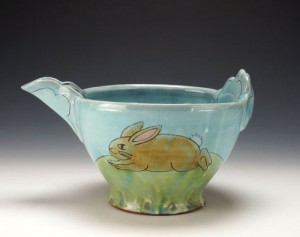 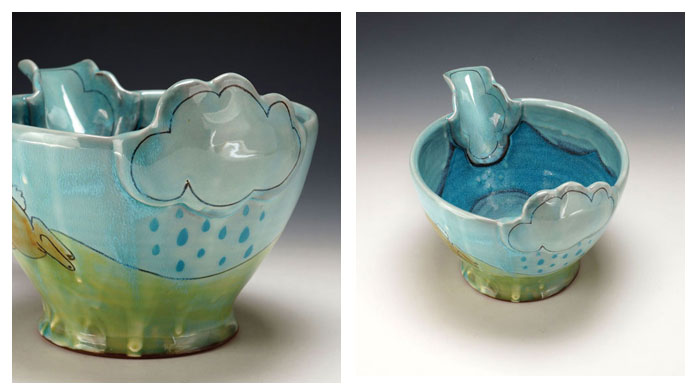