How to Make a Flower Brick Out of Entirely Wheel Thrown Parts Artist Joan Bruneau demonstrates how to make a wheel thrown and altered flower brick! Joan Bruneau

Flower bricks have a long history in the ceramic world. Initially, they were the shape and size of bricks laying on their sides and had numerous small holes in the top for flowers. But ceramic artists have played with that shape, and now you can find them in a wide array of shapes and sizes made using all sorts of techniques.

Joan Bruneau creates her flower bricks from entirely wheel-thrown pieces, right down to the florets and rosettes that decorate the flower grid. In today's post, an excerpt from Throwing Techniques, Joan shares her process.- Jennifer Poellot Harnetty, editor

Preparing the Clay for Building the Flower Brick

I mix my earthenware clay body using 60% Lantz clay which is mined in Nova Scotia by the Shaw Brick plant. Lantz clay is a unique earthenware for a couple of reasons: it is very plastic and is very tight at cone 04, which means there are no added fluxes to the clay body. I amend my clay body by adding EPK kaolin, OM 4 ball clay, and Red Art clay to raise the maturation temperature and 9% kyanite to reduce the potential for dunting. Professors Homer Lord and Walter Ostrom introduced a Lantz clay body at NSCAD in the 1970s and a number of potters in the area now mix their own versions of the Lantz clay body.

My oval flower bricks are assembled from wheel-thrown parts. The lids are assembled from thrown rings, cut to form arches that function as a partition, housing flower stems in various positions. To create these forms, I stretch a bottomless cylinder and join it with a thrown and stretched slab disc to form the base. I throw a foot ring separately then attach it to the base. I start the lid by making the flange first, then building up from there. The lid flange is a double-walled thrown ring with a groove thrown in the center. The first course of arches sets into this groove. In the end, every part of the flower brick, even the florets and finials, are thrown and assembled. Clay pinecones, rotting pears, and rosettes are formed from small knobs that are thrown off the hump and are incised with concentric rings. These rings are manipulated using a rubber-tipped tool to create the various shapes (A). Pulled twigs and thrown arches are set aside until leather hard and then assembled on the lid flange (B–D). 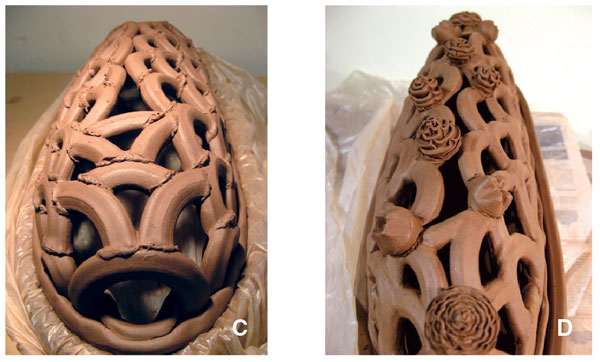 To learn how Joan Bruneau decorates these pieces, pick up a copy of Throwing Techniques in the Ceramic Arts Network Shop!